Another Tuesday, another primary in the U.S. presidential campaign. This time, both a Democratic and Republican primary in Wisconsin. Another night of the most surreal, mind-blowing TV coverage imaginable.

There was a lot of fodder for the late-night TV hosts last week, but they're all guys, so they might be missing the point. We'll get to that.

The town halls were followed, inevitably, by outrageously accusatory punditry on various news channels. Some of the defending of Donald Trump was being done by one Katrina Pierson, already notorious for outlandish remarks and accusations. And, if you want truly surreal, take note that Pierson is a regular on the tiny WE tv reality series Sisters in Law. It follows a group of "elite high-powered black female lawyers as they juggle their families, busy careers and even more demanding social calendars." The summary is this: "From trial prep and courtroom cross-examinations, to opposing counsel and opposing each other, watch as these powerful women struggle to remain civil under fierce competition and pressure."

The key phrase is "remain civil." From what's available, Sisters in Law is about women bickering. That makes Pierson (who appears as a friend of one of the main women) an ideal Trump woman. Bickering, finger-pointing, preposterous in her affinity for a spat, any spat. A reality-TV cliché.

Everything about the U.S. campaign, especially the Republican race, is all very male and roaring along on toxic, testosterone-driven twaddle. Anderson Cooper jeered Trump with "Sir, with all due respect, that's the argument of a five-year-old." Chris Matthews jeered Trump's bizarre and grotesque approach to the issue of abortion. Matthews: "If the man who got the woman pregnant is also responsible … ?" Trump: "I would say no." Matthews: "Well, they're usually involved."

What's interesting, if you're looking for deeper meaning, is that the sexism and misogyny are erupting all over the place at a time when it is likely that Hillary Clinton will be the next president of the United States. This likelihood seems to have ignited the dormant volcano of sexism that is always there, ready to erupt in the American culture. You can see it on TV almost every night of the week.

The first truly freakish detonation in the Trump campaign was his lavishly odious and innuendo-filled attack on Megyn Kelly of Fox News. That had a whiff of a young male's loathing of women who aren't obsequious or motherly in the presence of men. There was an air of disgust in Trump's aspersions that smacked of the five-year-old that Cooper accused him of being.

From there, it was on to Trump's utterly bugged-out comments that Clinton's use of the bathroom at a Democratic debate was "too disgusting" to talk about and that in 2008 she was "schlonged" by Barack Obama. And then on to the clattering childishness of the Twitter battle involving photos of Ted Cruz's wife, Heidi.

There is something going on here; something repugnant and reeking of the male establishment's fear and loathing of women. In the same way that the election of Obama seemed to wake up and unleash an abeyant racism, the likelihood of a woman president has caused a casual, dozing sexism to become rampant and livid.

Across the late-night TV shows from cable to network, the hosts are male. The fact that Samantha Bee got a look-in with a weekly half-hour show is, in the context, astounding. Further, since the departure of Jon Stewart, late-night TV, from The Daily Show through to Conan O'Brien and Jimmy Kimmel and all the other guys, has become frothier and less cutting in humour. Possibly because that male-centric corner of the TV universe is blind to what is actually going on – the dogs of chauvinism have been let off the leash and are running wild.

We are, after all, talking about a popular culture in which romantic comedies inevitably feature an emotionally damaged, attractive woman being wooed by a nerdy guy, and network sitcoms feature a schlubby droll guy with an attractive, thin and usually younger wife.

Everything about the appalling maleness of the U.S. culture is illuminated by this election cycle. There are the antics, the sexist innuendo that bespeak an outright disgust and distrust of women. And there is very male coverage of all that. It's a culture in which women are preferred as silent or as the stereotyped shrill, bickering harpies of reality TV. It's quite a sight, on a primary night, or on any other night you turn on the TV.

John Doyle: The real circus of U.S. politics is seen on The Circus
February 9, 2016 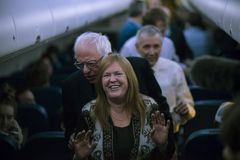 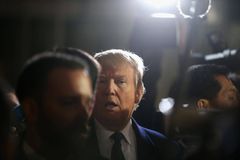