Here's an idea that's probably going nowhere but let's try it anyway – CBC's Amanda Lang could get down off her high horse and resign. Enough with the haughty umbrage.

CBC could help her down from the high horse and achieve some closure on the matter of Lang's allegedly compromised reporting and interviewing. But that's another idea that's going nowhere. CBC's umbrage is even haughtier than Lang's. It changed its regulations too late. Barn door closed after the horse left.

It's the umbrage and haughtiness that's galling. Because CBC is a public broadcaster. It exists for the public good, the common good, and it belongs to all of us. If there's a problem with business coverage on CBC, it's our problem too. We have a stake.

As citizens, consumers and taxpayers we are obliged to fund the CBC, and in return CBC delivers something that commercial broadcasters don't have to deliver. That "something" includes absolute clarity about corporate interests influencing how news and information is delivered.

At issue is a series of allegations by the podcast Canadaland – denied by Lang and the CBC – first, that Lang had a number of paid speaking engagements for a corporation whose representatives she later interviewed in a softball manner on CBC; second, that Lang attempted to diminish CBC's coverage of the revelation that Royal Bank of Canada was laying off Canadians and replacing them with foreign workers; and, third, that her involvement in the story was tainted by both personal and professional connections to RBC.

CBC news boss Jennifer McGuire first harrumphed that "appropriate protocols" were in place. Lang, interviewed for a Canadian Press story, denied she was paid for speaking at six events sponsored by RBC. "We don't consider as a matter of policy that when there are multiple sponsors it creates an appearance of conflict – it certainly doesn't create at any time any actual conflict – but the appearance of conflict is what the guidelines occupy themselves with, and in those cases that RBC was one of many sponsors, it was not considered relevant."

Well, regarding CBC's bluster, "appropriate" is in the eye of the beholder and since CBC is a public broadcaster, the beholder is the public. Some of the public did not see the protocols as appropriate at all. Also, Lang says "we" in speaking about the CBC – inappropriate since CBC is the employer and Lang is not the CBC. High horse, right there.

On Thursday, CBC announced a new policy. The broadcaster "will no longer approve paid appearances by its on-air journalistic employees." Due to "a changing environment." My posterior. It's due to public anger.

In the tangle of allegations is Lang's report on The National in April, 2013, about RBC's use of foreign workers. I saw it and wrote about it immediately because it was cringe-worthy. Before viewers got to hear the RBC boss's views, Peter Mansbridge interviewed Lang. You would think Lang had interviewed the Pope and had to start the interview with an explanation of esoteric religious matters that might confuse viewers. I wrote about it because there was the distinct whiff of fawning deference to RBC. It smelled.

A couple of days later, Lang wrote an opinion piece for this newspaper, again kowtowing to RBC and vigorously defending it. At the time, I queried Lang's sudden appearance in this paper. It just didn't seem quite right.

Lang was back in this newspaper on Thursday, online, with a long-winded defence. It was aimed at what she calls "the malevolent." Excuse me but there is nothing "malevolent" about questions regarding journalists taking cash payments from corporations they cover for a public broadcaster.

At the core of Lang's convoluted explanation, which reeks of vanity, is this: "In retrospect, I see that I allowed this circumstance to develop, by assuming that my integrity would not be questioned if I accepted speaking fees from business associations and companies." Again, barn door, horse gone already.

The other day, Lang was in Regina to speak to the Chartered Financial Analysts Society of Saskatchewan. The Regina Leader-Post reported that "the peppery CBC business journalist" had loads to say on innovation and productivity.

At about the same time, in The Guardian, no less, George Monbiot was writing about the Lang story, the CBC and the controversy as an example that "those who are supposed to scrutinize the financial and political elite are embedded within it." Monbiot writes, "CBC refused to answer my questions, and I have not had a response from Lang. It amazes me that she remains employed by CBC, which has so far done nothing but bluster and berate its critics. This is grotesque."

It's always bracing when outsiders look at Canada, its cronyism and system of privilege. Monbiot is correct – it is grotesque. It's time for Lang to get down off her high horse and go away. This is about the CBC's reputation, not hers, which is already in tatters.

When the TV news is funnier than the latest sitcom
April 10, 2013 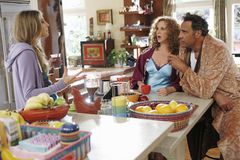 Canadian media unscrutinized, says reporter who broke Ghomeshi, Lang stories
January 13, 2015
Journalist Jesse Brown is quick to expose the failures of Canadian media. But what about his own?
January 16, 2015