There's a scene early on in Pure (Monday, CBC, 9 p.m.), in which a kid taunts some other kids on a school bus about being Amish. A teenage girl in an old-fashioned dress and a bonnet replies, "We're not Amish, you moron. We're Mennonite. It's different."

Later, the young woman, Tina (Jessica Clement, who is excellent), regrets her retort. She reacted in anger and that's not the Mennonite way. True. But, what's also true and unknown to many is the authentic background to this very good and engaging CBC miniseries.

Mennonites absent themselves from the trappings and sins of the contemporary world. In recent years, though, it has become clear some Mexican Mennonites – many with connections to Canada – have become partners with the canny and brutal drug cartels in Mexico. They grow marijuana and smuggle cocaine. Some police authorities believe the religious sect acts as a drug-smuggling pipeline to Canada.

Two years ago, the U.S. Drug Enforcement Administration (DEA) arrested a group of people connected to the Mexican Mennonites and seized vast quantities of marijuana and cocaine hidden in farm equipment that was headed for the U.S. Midwest and for Alberta. There are all kinds of reasons why some Mennonites are involved. One reason the Mexican cartels trust them is that Mennonites are a tightly knit, secretive group. They don't spill the beans. They don't like to deal with the police and other authorities.

Pure is firmly anchored in all of this. Set in Southern Ontario, it suggests from the get-go that there is something evil lurking under the bucolic landscape. (It's beautifully designed by Jennifer Stewart.) There's a grisly scene of murder that could come out of any blunt drama about drug running. Except here, it's unfolding inside the Mennonite community.

In that community, the stoic, capable dairy farmer, Noah Funk (Ryan Robbins, great in the role), reluctantly agrees to become the new pastor. He knows the job will involve more than preaching and nurturing souls, but he doesn't want to deal with the ugly side of the job. When his wife, Anna (Alex-Paxton-Beesley), tells him he will have to tackle the criminal drug-running inside the community, he says, "I will do my duty as preacher. It will be God who drives the evil away."

These might be filed under "famous last words." Part of the fascinating dynamic of Pure is its slow-burning illustration of the fact that avoiding the superficiality of contemporary society is no guarantee a person won't be tainted in other ways. Noah decides he can handle the situation and soon he takes strength from his tough decision to inform on a fellow Mennonite and let the police handle the matter. It's about the good for the community, he believes.

But nothing is so straightforward. The main drug-peddling leader, Eli Voss (Peter Outerbridge), simply threatens Noah's family and extorts him into taking a role in the cocaine-smuggling racket. Noah convinces himself that he will go along with it and get enough evidence about his fellow Mennonite smugglers to jail them all.

From the evidence of a couple of early episodes – CBC didn't provide all of the six-part series – the pacing and tone is subdued but gripping. Pure doesn't make the multiples mistakes committed by Shoot the Messenger – all gloss, speed and empty-headed melodrama. It's gripping as a slow-moving but tightly drawn crime drama. There is logic in every scene and blessedly little of the false mood-poetic style that can inflict Canadian drama. The pathos of Noah's situation is intense but the drama – created by Michael Amo – never loses sight of the fact it is a crime drama about dangerous, murderous characters.

Key to the course of the story is local cop, Bronco Novak (A.J. Buckley), a ne'er-do-well, who spends too much time on booze and hookers. The bosses are on to his antics and this case is his chance to redeem himself. Add in the fact that Bronco used to torment Noah when they were in high school, and it's a toxic soup of a forced alliance. There is also an interesting subtext in the treatment of Bronco as the person representing the world from which the Mennonites have tried to separate themselves, and have failed.

CBC has promoted Pure as an "eyebrow-raising premise" about Mennonites trafficking in drugs. And yes, it has a lurid quality, involving murder, sex, drugs and terrible danger. But the series transcends the lurid "eyebrow-raising" element to become a taut, well-fashioned drama about morals, ethics, an unlikely partnership and the impossibility of evading the evil and greed that permeates any society, no matter how pure. 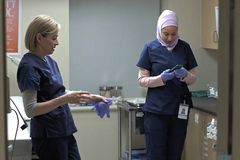 John Doyle: The Mick — Sometimes a bad show is just a bad show
January 2, 2017
John Doyle: The best gift this Christmas is the return of Letterkenny
December 19, 2016
Follow John Doyle on Twitter @MisterJohnDoyle
Report an error Editorial code of conduct
Due to technical reasons, we have temporarily removed commenting from our articles. We hope to have this fixed soon. Thank you for your patience. If you are looking to give feedback on our new site, please send it along to feedback@globeandmail.com. If you want to write a letter to the editor, please forward to letters@globeandmail.com.
Comments