It starts with sexy stuff. Young woman on top of a guy in bed. "You know we gotta stop this," he says. "That's what you said the last time," she says with a smile, which is all she's wearing.

Next thing, a phone call compels her to leave. She's a reporter and it's a source calling. On TV, this is always when sources call newspaper journalists. People who write TV shows have very vivid imaginations about the personal lives of newspaper writers. Anyway, off the young woman journalist goes, pronto. After all, the source says, "This is going to put you on the front page of the world, Miss Daisy."

Arriving at the meeting place, she sees another man talking to her source. The other guy is shot, and not by the source.

Thus begins Shoot the Messenger (CBC, 9 p.m.), the CBC's new breezy, glossy and entertaining crime drama. It is, for the most part, highly engaging. It's a network-style crowd-pleaser rather than a dark, brooding, cable-style, multilayered drama.

The series's creators, Sudz Sutherland and Jennifer Holness, have freely acknowledged that the dirt, drama and grime of Toronto's Rob Ford era inspired Shoot the Messenger. That is good. Stuff you couldn't make up that actually happened is good material. The show is not exactly based on the Ford scandal, but certainly uses elements of it. "We wanted to show Canada and all its rough edges," Sutherland has said in a CBC story about the show. "The Wire, The Killing, Luther – that's what's in this show's DNA and we wanted to show our own version of it."

Noble ambition not quite reached, is my judgment. But diverting drama that scoots along, it certainly is.

The series follows a young reporter – that's Daisy (Elyse Levesque), who witnesses that murder and in her ensuing investigation and coverage becomes enmeshed in a sticky web of drugs, guns and gang activity that, of course, leads to powerful people getting away with appalling behaviour.

Daisy works at The Gazette. There are some nice but roll-your-eyes-melodramatic flourishes in depicting a newsroom and its characters. (Headlines float across the screen to remind us it's a newspaper, which is a tad excessive in messaging.) The news editor, Mary (played by Alex Kingston with admirable relish), is a tough Brit. Tough and sexy, that is. She looks like she could swallow Daisy whole.

The issue of the merit of the series, such as it is, hinges on how the gravity of Daisy's situation is handled. And little of that is rooted in seriousness. She's young and naive – too naive to be given the sort of assignment she has here. She says things like, "I'm working on the biggest story of my career!" And since she seems to be straight out of journalism school and her career has barely started, that's a red flag for fatuity. Often, Daisy seems to be playing at being a journalist. It's a problem when a multipart drama hangs on the shoulders of a character who is more wide-eyed than inspiring.

"Give us insight into being part of the story. By becoming part of the story," the editor tells Daisy. And even someone not familiar with a newsroom can sense the outrageous implausibility of that. Especially when Daisy replies with a little speech about "my objectivity and all that."

Things get more substantial and gripping in later episodes as Toronto's gang and drug wars come into focus. (It is emphatically set in Toronto, by the way, and the local Somali community is a big part of it.) Daisy's sidekick in the coverage, the more senior, astute and slick reporter Simon (Lucas Bryant), is a newsroom figure more compelling than Daisy and the sense of his ruthlessness, part of journalism, is a welcome addition to the show.

Doing a drama about newspaper reporters isn't easy. Not all reporting is crusading. And Shoot the Messenger falters when it glosses over the grubby quality of investigative reporting that involves cops, gangs, drugs and politicians. It's an acrid business and after going near it, the audience should feel a bit dirty. That isn't quite the case here.

To its credit, Shoot the Messenger has the quickness of a thriller and there is a lot of plot – you get gripped by it and stick with it. To be truly great, it would need to be darker and more oppressive. It's not that, but it sure is amiable and entertaining. 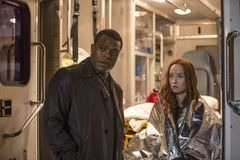 Orphan Black producers see bright future for Canadian TV
October 7, 2016
HBO series Divorce offers up original, demented comedy
October 7, 2016
Follow John Doyle on Twitter @MisterJohnDoyle
Report an error Editorial code of conduct
Due to technical reasons, we have temporarily removed commenting from our articles. We hope to have this fixed soon. Thank you for your patience. If you are looking to give feedback on our new site, please send it along to feedback@globeandmail.com. If you want to write a letter to the editor, please forward to letters@globeandmail.com.
Comments