You couldn't make it up. When people say, "It was like something in a movie" they mean this kind of bewildering twist that comes from the wicked mind of a scriptwriter with a satiric bent and mischief in mind. Someone audacious enough to insert Russia-backed sedition into the narrative.

Monday's theme at the Democratic National Convention was "United Together." No, seriously, it was. That was decided ages ago, when somebody at the top probably said, "Just stick some bland label on it and we'll figure it out." Next thing you know, "United Together" is the sarcastic understatement of the year. It's up there with, "Yeah, right."

Usually the first day of a convention makes for geeks-only TV. Some policy stuff, predictions from dozy panels. Not so on Monday morning. The release by WikiLeaks of insider e-mails from DNC HQ, focusing on grudges against Bernie Sanders and high-grade snippity-snark, has not so much cast a pall over the Democratic Convention as it had thrown a bunch of ten-cent firecrackers into the room. And who did it? The finger of suspicion points to Russia. The upshot is that the appropriate theme for Monday would, actually, be, "Fight! Fight! Fight!"

The sun had barely broken the horizon and there was scandal, shouting and invective. And sizzling, bewildering TV drama. CNN and other channels were scrambling to keep up. Nobody had expected that a breakfast speech by DNC chairwoman Debbie Wasserman Schultz (outgoing, as it happens) to Florida delegates would be a fiasco of furious insults, chanting and finger-pointing. It was, and the wobbly camera in the back of the room caught it all. Wasserman Schultz kept trying to talk over the screaming and was eventually escorted out by security staff and police, for her own protection. Yes, that actually happened.

On CNN, Wolf Blitzer came on-air and, assessing the situation – that's his field, he runs The Situation Room – balefully informed viewers that a "huge scandal" had erupted at the convention. A bit later, John King on CNN summarized the convention as "a volcano." The circumstance seemed to call for an appearance by one of those TV weather-reporters who can make a mild winter storm sound like the very bowels of hell have discharged and plagues of locusts will be along any minute now.

But, that's the job of Fox News. "Convention Chaos" was the title given to their special report. It wasn't that "special," though. Footage of Sanders' supporters shouting. And then Brit Hume came on to gaze into the camera and call Bernie Sanders "a crotchety old socialist." Given that the average Fox News viewer is 70 years old and male (an actual fact, that statistic), using the term "crotchety old" to describe anyone is a bit cheeky. Then out of nowhere, up pops Donald Trump on Fox.

Speaking at a rally and now totally, totally comfortable in his role as benevolent dictator of all American politics, Trump had a smirk as wide as a Trump Tower is high. After some sarcasm about the Democratic Convention and Wasserman Schultz, he referred to Hillary Clinton's choice for a running mate, Senator Tim Kaine, as a "weird little dude." Not making that up. He said that on TV. Then Fox News, being Fox News, took a minute to fret about refugees from Syria "invading" the U.S.A.

Dude of the day, by a long stretch was Bernie Sanders. The source of all that passion, intrigue and rancour. In the morning, he could be seen addressing his followers, trying to placate them and urging them to support Hillary Clinton. At least half the crowd booed Clinton's name, hissed hard and, if you listened closely, you could hear some chant, "Lock her up! Lock her up!"

The concept of surreal political drama was beggared by it – the hot-headed fanatical youths doing a perverse echo of the Republican hate-chant about Clinton. And they kept at it all day, chanting and heckling delegates outside the convention. A CNN report on that caused the anchor to tell the reporter, "Get them some water." Yep, they needed it, mostly on their heads.

They were still at it after 9 p.m., responding to comedian Sarah Silverman's "You're ridiculous" put down of the "Bernie or bust" movement, with loud chants of "Bernie! Bernie!" And then, at the end, after people more glossy and sleek – even after Michelle Obama's exquisitely crafted speech about the future belonging to America's children – Sanders commanded the stage and the world watching on TV, with a strange emphatic power.

Sanders upends the received and wrong-headed wisdom about what and who can commandeer television's incredible leverage. Old and choleric as he may seem, on TV, he's cool in the sense that Marshall McLuhan described TV as a cool medium. That is, cool media require participation or completion by the audience – the viewer can project a great deal onto certain people on TV; people who understand its "cool" quality. It's all about a sublimated message generated by some people in their relationship with the TV cameras. In Sanders's case the message is that he's completely confident, unruffled, relaxed and has nothing to hide. Lacking hubris, he is attuned to the present, not the past. His cadences, language and body language bring the message home – there is a better future.

Watch: Sanders: Clinton must become the next president

It is Hillary Clinton's great challenge to match that. And as Sanders's oration ended a strange, thrilling day, all that was lacking in the drama delivered on TV was the sound of Vladimir Putin cackling somewhere in Russia. That wouldn't seem made up, but plausible. It was that brilliantly surreal. 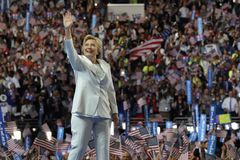