It's weird the way it works: TV satire failed to match the tumult of the U.S. presidential campaign and seemed to sag into irrelevancy, but now that Donald Trump is President the genre is essential, excoriating viewing.

Henceforth, it will be impossible to watch White House press secretary Sean Spicer without seeing Melissa McCarthy in his place, doing her maniacal, derisive lampoon of the man. In what was Saturday Night Live's finest act in years, every bragging, braying, ridiculous aspect of the new U.S. administration was nailed, and exposed in all its fatuous, macho ridiculousness.

The election campaign beggared comedy. The sheer number of outrageous twists and turns was dark comedy in itself, and TV performers could not rival it. It was difficult to top Donald Trump's self-satisfied, bragging gibberish when it was already so outlandish.

The situation was compounded by changes in the American TV landscape. Jon Stewart had left The Daily Show and Trevor Noah was still finding his feet. Stephen Colbert got off to a rocky start on his Late Show on CBS. Samantha Bee's weekly talk show was new too, and more interested in channelling outrage than creating outright satiric mockery. John Oliver was giving robust but wordy, often sanctimonious sermons every week on his HBO show.

Much of the material aimed at Trump amounted to comedy throwing up its hands and bellowing, "Look at this guy!" The nadir of it all was Colbert's live election-night special, an event that went bizarrely unfunny as Colbert and his team realized Trump had won.

Now it's different. Saturday Night Live is reborn, as this weekend's show proved without question. First, having McCarthy play Sean Spicer was inspired, as the actor's specialty is a particular kind of demented, on-the-verge-of-a-breakdown delirium. Her Spicer emerged shouting at the White House press corps, frantically chewing on gum and issuing threats to the press while simultaneously declaring, "I don't talk so good."

The sketch had a furious energy as McCarthy's Spicer bellowed that, on the occasion of Trump's announcement of his Supreme Court nominee, "Everyone was smiling, everyone was happy, the men all had erections, and every single one of the women was ovulating left and right!" The sketch then became even more demented as the Spicer character moved the podium and used it to attack and bully reporters. It was savage stuff but it captured perfectly Spicer's crazed preoccupation with denying the reality of facts as they are reported by the media.

More telling, maybe, was the sketch's precise and hard-nosed judgment that the Trump administration is chaotic, out of its depth and madly floundering. That is more fatal than any amount of mockery of Trump's hands and limited vocabulary.

The sketch was so inspired it overshadowed the "cold open" that featured Steve Bannon as the Grim Reaper manipulating Alec Baldwin's Trump through a series of muddled, childish calls with foreign leaders. That culminated in an annihilating phone call to Zimbabwe, and an enraged President Robert Mugabe dismissing Trump as a weak "white bitch." Linking Trump to the irrational, macho and wrathful styles of African strong-man dictators has been done before, mainly by Trevor Noah on The Daily Show, but a more stinging joke was to come. The Bannon figure ordered Trump to the President's tiny desk in the Oval Office, where Trump played with toys while Bannon actually did the governing.

Nothing is likely to be more hurtful to Trump's ego than suggestions that he's a puppet of smarter, more cunning people and that he's a mere child attempting to do an adult's job.

The fact that Trump watches Saturday Night Live and has reacted to it with his trademark combination of boasting and hurt scorn gives every SNL a certain frisson. For much of the last episode the focus stayed on Trump, from host Kristen Stewart's opening monologue mocking Trump's previous and cringe-inducing obsession with her dating life, to a mock video satirizing the now-shambolic state of U.S. border control, to a "Weekend Update" segment that was so puzzled-indignant about Trump's travel ban that it teetered into chaotic laughter and blundering performances.

The point is that Saturday Night Live now has a fixed, juicy target in the Trump administration. It is not wildly firing comic shots at the usual suspects. It has fierce precision in its vicious mockery of the pandemonium inside the White House.

Much the same applies to others in TV satire, especially across the late-night shows. Seth Meyers does a rigorous undermining of the Trump administration in his "A Closer Look" segments, Colbert is energized by the material presented to him each day, Trevor Noah has never been as funny on The Daily Show as he is now and Jimmy Kimmel is practically licking his lips each night, relishing the gift presented to him.

On Monday morning, Sean Spicer said he thought Melissa McCarthy's impression of him was funny but exaggerated. More instructive was his criticism of Alec Baldwin's Trump as "mean." He said, "Alec has gone from funny to mean, and that's unfortunate. SNL used to be really funny. There's a streak of meanness now that they've crossed over to mean."

True. There's a fixed target to focus on – the shambles of a Trump government. And it has emboldened Saturday Night Live and others to soar into a new age of caustic, lucidly adversarial satire. Long may it last. 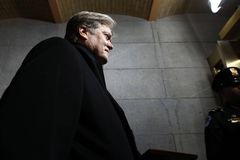 John Doyle: A necessary one-hour primer on how Trump became President
January 23, 2017
Will fake news provide an excuse for the feds to help Canadian media solve their real financial woes?
January 26, 2017
Follow John Doyle on Twitter @MisterJohnDoyle
Report an error Editorial code of conduct
Due to technical reasons, we have temporarily removed commenting from our articles. We hope to have this fixed soon. Thank you for your patience. If you are looking to give feedback on our new site, please send it along to feedback@globeandmail.com. If you want to write a letter to the editor, please forward to letters@globeandmail.com.
Comments