"Your parents were murdered in the house we're about to move into."

Aw, jiminy. Shiver me timbers and yours, too. A statement like that telegraphs some old-fashioned horror is coming. And yes, it's here, and bloody good. Very bloody, though. Sex is at the bottom of it, you will be pleased to know.

Slasher (Super Channel, on-demand and new episodes Fridays) is it, and it's a heady mash-up of horror tropes and themes. Created by Aaron Martin (Killjoys, Being Erica) and shot on location in Parry Sound and Sudbury, Ont., it is officially described as a "psychological thriller series," but it sure has some gore. If gore's your thing, Slasher will slay you.

Things open at Halloween, in the honourable tradition. It's 1988 and a young couple is getting ready to go to a Halloween party. The chap is expecting his friend for a beer beforehand. The wife begs off the party, being heavily pregnant. There's a knock at the door.

A masked, silent figure enters, no questions asked. Because it's Halloween. Things then get very bloody very fast. There is a really, really gruesome slaying. The unborn child survives, of course.

That's Sarah Bennett (Katie McGrath), whom we meet in the present. And she is the one moving back into her parents' house with hubby Dylan (Brandon Jay McLaren). The small town they arrive in is, naturally, agog with the news that Sarah is moving back. The man who killed her parents, dubbed the Executioner, is in jail. But some horrible memories are being stirred up.

The couple have barely arrived when a neighbour, Mrs. McBride (Mary Walsh), is yelling at them. Also, another neighbour woman, Mrs. Peterson (Erin Karpluk who was the wonderful Erica on Being Erica), is wandering around outside in her slip, muttering about a lost child.

Before you can say, "This town is full of crazies," Mrs. McBride is back to yelling and hissing at Sarah. She leans into her car and says, "Just because we're neighbours doesn't mean we're going to be friends. Your mom was a dirty slut. By the looks of it, so are you." Walsh is quite brilliant as the bitter, twisted Mrs. McBride. It's delicious.

Slasher is the kind of horror story in which women go for a walk alone at night and enter dark basements without a thought for their safety. This is necessary in the genre if the audience is going to get a kick out of it.

But there's a mystery to be solved in Slasher and we get our first clue when Sarah does indeed enter the basement. What she finds there are sex tapes. As she explains to her husband, "I never imagined that my dad was Larry Flynt and my mom was Linda Lovelace." Like, who ever does?

Meanwhile, there are more gory shenanigans going on. As luck would have it, and you saw it coming, the town is suddenly plagued by a series of horrifying copycat murders. The killer of Sarah's parents is locked up – she goes to see him, naturally – so who is on the rampage? Aw, jiminy.

There is a lot of fun to be had in Slasher but, fair warning, it's on a Canadian premium cable channel, so the gore and sex are explicit. And on the evidence of the first two episodes, it is very well-crafted, with an exceptional cast.

It is no masterpiece of horror, nor was it meant to be. There's a bogeyman and scenes of chilling murder and violence, but the momentum of the story is Sarah's slow discovery of the truth about her parents and their lives.

What you will watch for, mind you, is the tightly paced, grisly horror that goes on and on, and shivers your timbers expertly. Highly recommended. 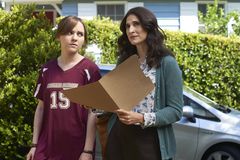 John Doyle: CBC weighs why we spend so much on pet health care
March 30, 2016 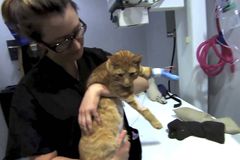 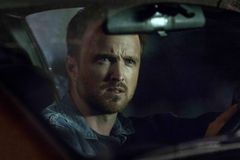