There's a theory floating around that a martial arts/kung fu craze is about to be unleashed. This is a theory propagated by the sort of young man who thinks that going to Comic-Con is the height of sophistication and writes stuff for free on websites devoted to comic book and action-hero movies.

The rest of us disagree. About Comic-Con and kung fu. And on the evidence of this weekend's big new series, we can safely do without an avalanche of kung-fu craziness.

Into the Badlands (Sunday, AMC, 10 p.m.) is bad. So very, very bad. The channel that brought us Mad Men, Breaking Bad and Better Call Saul is now angling for young male viewers with a chopsocky drama so silly and convoluted it beggars description. But, yeah, it's so bad, it's good. And it is visually sumptuous. As in, madly garish.

Created by Alfred Gough and Miles Millar, responsible for the terrible teen-fave show Smallville, the series is set in a future in which society as we know it has been blown to smithereens by something or other. It is replaced by a feudal society with faux barons, many peasants and warriors wandering around on motorbikes with swords. It seems to be set in the American West, with a strong hint of Southern Gothic.

The latter is suggested by the existence of a plantation run by a madman, Quinn (Martin Csokas), who talks in the broad Southern drawl so beloved in high-school productions of Tennessee Williams' plays.

Anyway, amid the confusion, much of the action is anchored in a warrior fella named Sunny (Daniel Wu) who doesn't say much. It is no surprise if I tell you that he lets his fists and his sword do the talking. He is what is known as "a clipper" in the rigmarole that is the show's ridiculous mythology.

Sunny comes across a kid, M.K. (Aramis Knight), a mysterious figure who, in the manner of such stories, has mysterious powers. Sunny and the kid set out in a journey. Exactly why and where they are going, I'm not sure.

The journey is, naturally, interrupted at regular intervals by spectacular martial arts fights, sword fights and scenes of gory torture. These are staged with an emphasis on blood, pain and severed limbs. The choreography would be admirable if there wasn't such a ridiculous amount of blood.

There is also a ridiculous amount of phony cynicism. The barons are bad people, always feuding and plotting. In this, the series is, one supposes, meant to match Game of Thrones – the message being that any sign of weakness or hesitation is met with brute force.

However, if AMC imagined that Into the Badlands would capture the Game of Thrones audience with this sort of gibberish, it imagined wrong. There is no rhythm to Badlands; none of the substantive, textured fantasy that the HBO series delivers with relish.

There is, mind you, one saving element in this epic of chopsocky schlock. That is English actor Emily Beecham as The Widow, a figure who controls an area of power and is the sworn enemy of the madman Quinn.

All got up in thigh-high boots and leather dresses, The Widow is an adolescent male fantasy brought to life by Beecham's keen enjoyment of the mayhem. You haven't lived through a martial arts/kung fu fracas until you've seen her take down a posse of varmints and finish them off with her stiletto heels. Phew.

To the rest of the series, one says, "You are friggin' kidding me."

The Mindy Project (Sunday, City, 8 p.m.) arrives on TV here, after being rescued by Hulu following the cancellation by Fox. It starts where it ended on Fox – a pregnant Mindy is in a tizzy because Danny (Chris Messina) made a marriage proposal. So things begin with Danny in India to persuade Mindy's parents of his suitability. Mindy, when we meet her, is in dreamland. Literally. We get an imagined alternative life for the character, one that involves Joseph Gordon-Levitt, and some light but sharp humour. The scenes of Danny interacting with Mindy's parents are joyful comedy. As ever, the show is a delicious concoction, its feminism probably overstated by fans, but it remains a zesty variation on familiar sitcom rhythms and themes. 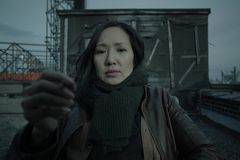 John Doyle: The Affair is the most perplexing, angst-driven drama on TV
October 16, 2015 John Doyle: The Romeo Section is a subtly sexy thriller for grown-ups
October 13, 2015 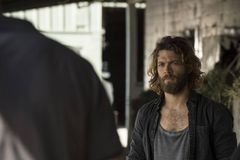