According to a bunch of pundits, the Democrats lost the U.S. presidential election in part because the party was more interested in talking about bathroom rights than the right of working people to a job and decent wages.

That debate will roil onward, but there is no doubt the issue of gender became a flashpoint in the United States last year: From universities allowing students to choose how they wanted to be identified to local authorities refusing to allow access to public bathrooms by those who don't identify as male or female.

The gender issue is a minefield. Even the matter of what pronouns to use is likely to draw fire.

"It used to be so simple. You were a boy or a girl." That's what Katie Couric says, in what is a massive understatement that opens the two-hour documentary Gender Revolution: A Journey with Katie Couric (Monday, National Geographic Channel, 9 p.m.).

The program attempts to approach the topic of gender through "the lens of science, society and culture, all woven together by personal stories and experiences."

It's an eye-opener for sure, especially for anyone who has not paid close attention to the issue. Couric, as usual in her work, uses the persona of American Everywoman, somebody curious but bewildered by sudden changes.

There are some things to keep in mind here. First, Couric might seem an odd choice. As executive producer of Under the Gun, a documentary about gun violence, Couric was obliged to apologize last year for misrepresenting the views of the Virginia Citizens Defense League in the doc.

Also, Couric was roundly criticized a few years ago for asking what some viewers thought were aggressively rude questions of transgender women on her short-lived talk show.

But the main thing to keep in mind is that the National Geographic Channel is on the rise right now. Under new leadership, the channel is moving into hot-button docs and series that are connected to current-affairs issues.

The old brand is newly ambitious to reach a much wider audience and Katie Couric is simply a vehicle for that.

So, Couric presents herself as representative. Born in 1957, she stresses that "every message in popular culture enforced this image of male/female differences."

She talks to people on the street who are spooked by the issue of gender. "There is a madness going on with political correctness," says a woman who would seem to be much younger than Couric.

From there, however, the program launches into a solid, information-filled two hours about science and sexuality.

Some of the information might seem routine to some viewers, but there will undoubtedly be a vast number of people who learn for the first time about how, for decades, there was a range of "medically acceptable" infant penis and clitoris sizes used to determine gender at birth. And how it was common for medicine to actively intervene and "normalize" the bodies of infants born with atypical bodies.

There are also numerous interviews and profiles of what Couric calls "gender nonconforming people and people who are living beyond the binary," on the reasonable basis, as she says, that it is good to know the individuals having an impact on public policy in the U.S.

Throughout, Couric maintains the stance of someone who is on a journey to understand the people and the issues being discussed. It would be hard to say that the program does, as Couric boasts "answer every question you were afraid to ask," but it will come close to that for many viewers.

The doc is an accompaniment to the National Geographic magazine's print issue, entirely devoted to gender.

No, there are no pundits fulminating about the Democrats being distracted by bathroom issues. You just keep that in your own head.

Doing Jewish: A Story from Ghana (Vision TV, 9 p.m) is a buoyant documentary by and about Gabrielle Zilkha who volunteered to work in Ghana. She eventually wondered if she was the only Jew in an ocean of Christians. To her surprise, she discovered the small, remote Sefwi Wiawso community in Ghana, who say they are Jewish. They keep Kosher dietary laws and had done so for centuries. Or had they, really? Some said the community only dated back to the 1970s.

But on a bizarre and educational (and often funny) sojourn into the community's rich history and its links to Judaism, Zilkha uncovers an extraordinary story. Off the radar of the established Jewish community in the world, the Jews of Sefwi Wiawso, are the channel for a series of remarkable revelations. Highly recommended. 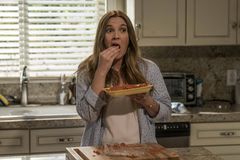