There's a point, early in 13 Reasons Why (starts streaming Netflix, Friday) that telegraphs where everything is going. Two teenage boys are leaving school, one giving the other ride home. One, Clay (Dylan Minnette), tells the driver, Tony (Christian Navarro), that he's impressed by the "old media" sound system in the car. They set off. Tony presses a button and the car and the soundtrack fills with the sound of Joy Division's Love Will Tear Us Apart.

The song isn't used often in movies and TV. It's raw, visceral, beautiful and it signals doom. 13 Reasons Why has a lot of doom and some obviousness. It is at times a wonderfully textured treatment of adolescent alienation and at times it tries way too hard to tell what could be told much more subtly.

Based on Jay Asher's bestselling 2007 YA novel, this hard-to-review series is about high-school life in an ordinary American place, but it's also a mystery. As it opens, Hannah Baker (Katherine Langford) has committed suicide. It's not long after, and her high school is coming to terms with it. Teachers and some parents are making the right noises about recognizing the signs of distress and suicidal thoughts. Some kids want to just move on, finding the attention to Hannah's death a bit ghoulish.

Then, it falls to one of the boys in the car, Clay, to figure out why Hannah died. She left him a box with 13 audio cassettes, telling the story of her life and, as Clay and viewers follow the events described in the tapes, the complicated circumstances leading to her death unfold. Much of the story is in flashback and it is Hannah's voice guiding everything.

Soon, we are delving onto Hannah's account of dating a guy – a guy described as "jock crack" by one of her friends. There doesn't seem to be anything sinister about events. In the usual hierarchy of high school, there are normal girls and mean girls. There are jocks who are dumb but sweet and those who are almost evil in their macho contempt for others, especially the young women who admire them. Someone disses somebody else. Somebody starts an ugly rumour. Somebody develops a crush and it goes awry. Then, slowly, the downward spiral of Hannah's life becomes clear – pictures are taken and circulated, two rapes take place and, maybe, a death is covered up.

The fact that Hannah is dead creates the sinister element. And yet, the series is intent in celebrating the small joys of adolescent life. Friendships made, a sense of humour recognized and cherished. There are some wonderfully done scenes in which we see Hannah and Clay working the food stand at the local movie theatre, wearing uniforms they hate and bonding over their wry humour about the job and school and little crises in life that can take on epic proportions.

Those scenes are excellent; droll, humane and powerful but without weight. It is the movement forward through the period described in Hannah's tape that starts to drag. Minnette is excellent as Clay, and he has to be – he is not a stock character from every movie and TV show about high school. He's sensitive but wary, yet most other kids like him without thinking much about him. As he turns detective of sorts, mind you, with the help of Tony, the drama tends to wobble. There are characters who seem important in the discovery of what happened to Hannah, and they aren't that important. After just two or three episodes one gets the feeling that the storytelling needs trimming.

Nobody is being patronized in 13 Reasons Why and that is unusual. A good deal of material set among teenagers tends to look down upon them, sometimes lovingly, but still with a indulgent attitude. Here, the gap between adolescence and adulthood is very clear. Hannah's mother (played with aplomb by Kate Walsh) is a deeply hurt, grieving adult, bewildered by how much she didn't know about her daughter. And it is the kids who know abut the tapes Hannah left behind, not her parents.

The brains behind the series are an impressive bunch. The writer is Tony-winning playwright Brian Yorkey; Oscar-winning director of Spotlight Tom McCarthy is an executive producer and directs several episodes; and indie director Gregg Araki also directs.

Perhaps there's a problem with so many distinct talents involved. 13 Reasons Why is lovely, gripping, sensitive and tender. But it feels a bit bloated. As if too many hands were involved and never quite agreed on the pace and flow of the story. It isn't recommended for an outright binge watch – it soars and then disappoints and soars again. 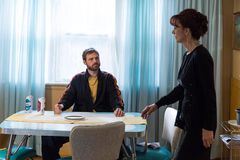 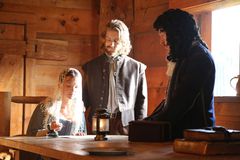 John Doyle: The soul of Trump’s America is visible in the CBS schedule
March 23, 2017
Follow John Doyle on Twitter @MisterJohnDoyle
Report an error Editorial code of conduct
Due to technical reasons, we have temporarily removed commenting from our articles. We hope to have this fixed soon. Thank you for your patience. If you are looking to give feedback on our new site, please send it along to feedback@globeandmail.com. If you want to write a letter to the editor, please forward to letters@globeandmail.com.
Comments