In some ways, it seems Netflix operates very much like a traditional studio or broadcaster. Writer and actress Sian Heder wrote numerous episodes of Orange is the New Black over two seasons. She wanted to make a movie she had written, Tallulah, so Netflix backed it and made it as a Netflix original. After screening to some acclaim at Sundance, it's available for everyone to see.

Tallulah (streaming on Netflix from July 29) is an enchanting, sharp little gem. It has some of the characteristic quirks of the early seasons of OITNB, with its compassion for female figures who, it eventually turns out, are far more complex than they seem to the viewer or to other characters. Heder's gift is for expanding the story, for anchoring the actions of sometimes desperate, off-putting people in a humane context. There's a lot of that here.

Some reviews from a screening at Sundance suggested this is the best work by Canadian Ellen Page since Juno. I can't vouch for that, not having seen many of her films since, but she is outrageously good here. She carries the film, playing the title character, known to everyone as Lu. She and her boyfriend, Nico (Evan Jonigkeit), wander the United States rather like contemporary hippie-hobos. They live out of a dilapidated van, survive by dumpster-diving and stealing. They are aimless in their journey and their main source of income is a gas-station credit card Nico got from his well-off mom.

Lu is full of old-hippie ideas. She wants to go to India on a whim. But Nico wants more out of their aimless life; he wants to return to New York, see his mom and live a normal middle-class millennial life. So he abandons Lu.

Abandonment – dealing with it and healing from it – is a significant theme. In search of Nico, Lu finds Nico's mother, Margo (Allison Janney), a woman, it turns out, who is going through a bitter divorce, but wants nothing to do with her. Lu then does what she does – she cruises an upscale hotel, taking uneaten room-service meals for food. There, mistaken for hotel staff by a boozy, blowsy woman who needs a babysitter, she takes the job. Lu is vaguely disgusted by the woman, Carolyn (Tammy Blanchard), who lets her little kid wander diaper-less and is in the hotel only to have an extramarital encounter. More abandonment, right there.

One thing leads to another. Lu takes Carolyn's child, feeling that somebody has to do the right thing. In an uneasy alliance with Margo, family and societal clichés about children and parenthood are teased out and put under severe pressure. Meanwhile, there's a sort of thriller subplot that is instigated by Lu's decision to take Carolyn's baby.

What ensues is wonderfully nuanced as the three main characters come to grips with the lives they've led so far. Page is extraordinary in some scenes – the perpetual child who became a hippie and is drawn into a complex web of emotions about family and the care of children. There's a wonderful passing moment when Lu asks Margo if she wants to hold the baby. Margo, eyes flashing fear, says, "No. I'm not stupid."

There is an edge to Margo that softens, but this is not a predictable feel-good story about people learning to love. They grow more interesting than that. Even Carolyn, who starts off so blatantly narcissistic. Nobody is a stereotype here. "I think it's better not to be needed," says Lu at one point as she is obliged to talk about her own hidden background, and where that revelation leads isn't down the expected route. There is, in the end, compatibility between the characters, as there is, clearly, between the three main actors. There's pain in this trio's intersecting story but there is also something bewitching about the gradual way that substance is attached to everyone involved, and meaning given to their messy lives. Heavily recommended, this one.

And with that, I leave you for a few weeks. Enjoy what you watch and read, and be kind to each other. There's enough torment out there in the world.

John Doyle: Unclaimed is a dramatic TV movie about the Pickton murders
July 22, 2016 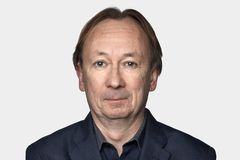 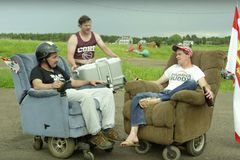 John Doyle: In praise of the therapeutic power of the obnoxious in Difficult People
July 19, 2016