A problem that comes with writing a column about television is that every now and then you feel obliged to act like you're addressing a public meeting. You should clear your throat, make a pronouncement and then use such phrases as "further to my earlier point."

People get a bit thick about TV, you see. A bit woozy and sometimes a bit declamatory. Everything to do with it can morph into some kind of public argument. Many a time and oft I am in receipt of feedback from readers who write to inform me that they haven't watched TV for years and feel the better for it. They're lying, of course. If they were happy with their decision they wouldn't be writing to me about it all the time.

And then there are the people who write to tell me they've tried to watch a show that I've just written about but it hasn't aired yet, and that they gave up on it. It was that bad, sad and pathetic. Oddly enough, they don't boast about their extra-special access to shows that haven't aired yet for the general public. People are peculiar. One of these days I'll write back and say, "It hasn't aired yet, you fool!"

Anyway. Today's epistle will come as manna from heaven to those people who enjoy a dislike for television in general and savour any hint that television is dead. It isn't. But there are changes afoot.

First, the good news – The Big Bang Theory will be back for another two seasons. If that's good news for you, that's peachy. At this rate, by the time Big Bang is cancelled, everyone who saw the first episode in 2007 will be retired and the cast will be so rich they own California.

The point of keeping it going is twofold. First, it's still a hit and, second, it will prop up the coming spinoff, Young Sheldon, in which Sheldon Cooper is a kid and older Sheldon (Jim Parsons) narrates. Meanwhile, across the networks, there is gloom.

Some 17 new scripted dramas and comedies have been launched from Jan. 1 through last week and not one is a hit. Midseason TV is a disaster zone.

Fox launched 24: Legacy right after the Super Bowl game ended and and hardly anyone is watching. The spinoff from NBC's established hit The Blacklist, The Blacklist: Redemption, debuted and nobody noticed. ABC's Time After Time and CBS's legal drama Doubt, starring Katherine Heigl, have stirred no interest. CBS also shifted its heavily promoted Training Day to Saturdays where even fewer viewers will find it.

In strictly inside-TV terms, the number of duds is being blamed on a weak network fall season that really only saw one new hit emerge: NBC's This Is Us. Without a strong lead-in, it's hard to launch and bolster any new series.

The reality is, mind you, that there is far more competition for network TV each and every year. Cable and streaming shows have the cultural cachet, and there are far fewer duds being launched in that arena. When it started recently, Feud on FX drew more viewers than any show on the channel since The People v. O.J. Simpson. Big Little Lies has galvanized an HBO audience hungry for a relatable murder-mystery. People are watching stand-up specials on Netflix and, these days, Netflix isn't the only competition networks face.

There's politics. The White House daily briefing, starring Sean Spicer, often has more viewers than any other daytime broadcast. Saturday Night Live has, on occasion, had more viewers than any prime-time weekday network show. Even 60 Minutes is back in contention as a top-10 network show. Nightly, Fox News and CNN are competitive with some network and cable dramas, in terms of ratings, because they have the talked-about drama unfolding.

And then – further to my earlier point, so to speak – there are shows that haven't aired yet. April is now the coolest month, what with it being just under the wire for inclusion in this year's Emmy Awards.

AMC brings back Better Call Saul and FX launches a new season of Fargo in April. HBO brings back The Leftovers and Veep next month, too. And AMC has an adaptation of Philipp Meyer's western novel The Son, starring Pierce Brosnan, coming on April 8.

Netflix launches the angsty teen drama 13 Reasons Why on March 31 and even the networks have more new series to launch. Why, ABC has yet to air Downward Dog, which features a talking dog. Listen, I wouldn't kid about that.

There might be a few new hits but it's not over until the dog talks. So there. 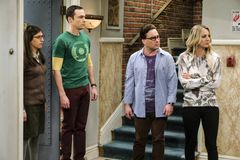 Breaking Bad writer brings ‘dark sensibility’ to Anne of Green Gables
March 17, 2017
Follow John Doyle on Twitter @MisterJohnDoyle
Report an error Editorial code of conduct
Due to technical reasons, we have temporarily removed commenting from our articles. We hope to have this fixed soon. Thank you for your patience. If you are looking to give feedback on our new site, please send it along to feedback@globeandmail.com. If you want to write a letter to the editor, please forward to letters@globeandmail.com.
Comments