Awards season is under way. If that's your thing, and heaven knows there is an assumption that the world is gripped by a series of events that are both frock operas and prize-giving, note that there is one doozy this weekend.

The SAG Awards honour both film and TV, which, like the Golden Globes, makes it a bit more inclusive. You are more likely to have seen some of the performances. Also, it moves along at a bustling pace. This ain't no marathon of sagging sequences with songs and long-winded speeches.

In the movie categories, Manchester by the Sea got the most nominations. A surprise – or eccentric, perhaps – entry is Viggo Mortensen's Captain Fantastic getting two total nominations for ensemble cast and lead actor. Emily Blunt is up for The Girl on the Train, joining Meryl Streep (Florence Foster Jenkins), Natalie Portman (Jackie) and Amy Adams (Arrival) among the lead-actress nominees.

But let's talk TV. Netflix's The Crown is in multiple categories, with John Lithgow and Claire Foy getting the glamour individual nominations. FX's The People v. O.J. Simpson: American Crime Story is tied with The Crown and Game of Thrones in total nominations.

Sarah Paulson is likely to win for her work as Marcia Clark in The People v. O.J. Simpson. The competition is from Kerry Washington for HBO's Confirmation, Felicity Huffman for American Crime and a surprise nomination for Bryce Dallas Howard in an episode of Black Mirror.

For male actor in the equivalent category – television movie or limited series – anyone with any sense is hoping there isn't a Golden Globes-style upset. Sterling K. Brown of The People v. O.J. Simpson lost out there to The Night Manager's Hugh Laurie, which underlined the Globes' favouritism toward British actors and productions. Interestingly, The Night Manager hasn't much torque at the SAG Awards. Sterling K. Brown will compete against his co-star Courtney B. Vance, but both are deserving. And a surprise winner could be Riz Ahmed for his excellent work in the HBO miniseries The Night Of, in which his character made an extraordinary journey of change.

Female actor in a comedy series amounts to a very peculiar assortment. Uzo Aduba has won twice for Orange Is the New Black and Julia Louis-Dreyfus won before that for Veep. Both are nominated again. But Jane Fonda and Lily Tomlin are nominated, too, for the barely watchable, overly retro Grace & Frankie. Ellie Kemper gets her second nomination for Unbreakable Kimmy Schmidt, which is seriously underrated. The award is likely to return to the hands of Louis-Dreyfus, given the political context of the show.

The SAG Awards are fun, in a sleepy, relaxed manner. The frock-opera element remains, mind you. Live from the Red Carpet coverage starts on E! Canada (6 p.m. ET), which promises "Multiplatform coverage of the 2017 SAG Awards; capturing every spontaneous moment of the night and delivering the most fun and authentic celebrity conversations with the industry's hottest names."

Recently, because there are TV categories, I've been inundated with news releases and notices. Thus I can tell you what the stars of film and TV are offered for dinner. The menu, "developed" by the ubiquitous Wolfgang Puck, will feature roasted acorn squash with toasted farro topped with lolla rossa lettuce, almonds and cider vinaigrette; green-tea-marinated salmon with bulgur wheat, tofu and sweet soy; and spiced chicken with Moroccan couscous and saffron aioli. Also, 3,200 homemade breadsticks, which nobody will eat.

My Son the Jihadi (Sunday, CBC NN on The Passionate Eye, 10 p.m.) is a powerful doc from Britain about Thomas Evans, who left his home in Buckinghamshire to join the jihadi group al-Shabab in Somalia. He was 21, and became the "only known white British man to join the terror group," one which seeks to impose its strict version of Islamic rule. His mother, who raised Thomas and his brother in a non-religious household, wonders what she could have done to keep him from heading toward radicalization. After he left, the only contact was occasional phone calls from him. His mother explains that she'd ask him, "Have you hurt or killed anyone?" and he wouldn't answer. When she asked him, "Who put these ideas into your head?" he just answered, "Allah."

Manchester by the Sea dominates Screen Actors Guild nominations
April 7, 2017
John Doyle: Lessons from the Emmys – the bar is very high in TV now
May 17, 2018 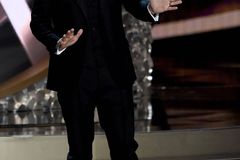 John Doyle: Forget HBO, FX is the quality channel now
April 13, 2017
Follow John Doyle on Twitter @MisterJohnDoyle
Report an error Editorial code of conduct
Due to technical reasons, we have temporarily removed commenting from our articles. We hope to have this fixed soon. Thank you for your patience. If you are looking to give feedback on our new site, please send it along to feedback@globeandmail.com. If you want to write a letter to the editor, please forward to letters@globeandmail.com.
Comments