He came, he saw and he bashed in two heads with a baseball bat wrapped in barbed wire. The character Negan arrived fully on The Walking Dead (Sunday, AMC, 9 p.m.) last week and conquered the ragtag group of survivors lead by Rick Grimes. Brutally, ferociously conquered them. All is changed now.

The conservative watchdog Parents Television Council was very upset about the opening episode of season seven of The Walking Dead last week and, for once, they are not entirely alone.

"Last night's season premiere of The Walking Dead was one of the most graphically violent shows we've ever seen on television, comparable to the most violent of programs found on premium cable networks," the PTC declared last Monday. "This brutally explicit show is a powerful demonstration of why families should have greater control over the TV networks they purchase from their cable and satellite providers."

Yes, the show is now more brutally explicit than ever and more emphatically grim. It remains one of the biggest shows on TV, a ratings juggernaut. And two questions arise. First, has the show gone too far with its bloody, crushed heads and extreme torture? Second, is The Walking Dead worth sticking with?

No, it hasn't gone too far. It has been nihilistic from the get-go and blithe about relentlessly killing off beloved characters. That bloody-mindedness is there to remind viewers that in this zombie-plagued, post-apocalyptic world, everyone is just a few seconds away from death.

As for sticking with it, that's a harder question. You need a strong stomach to accept the violence. The thing is, with the final episode of last season and the opening episode this season, you also need a strong stomach for speeches, posturing and an inordinate amount of pompous talk. Previously all plot, The Walking Dead is now all talk with regular interruptions for savagery. That's the weakness; not the graphic killings.

The popularity of the show indicates a vast audience is entranced by the possibility of a world without order, communication or modern technology. And the audience fantasizes about the possibility of helping recreate a decent society and culture from the ruins of destruction. Through the first six seasons, the central group of characters lurched from one place of safety to another. At each place, there is a faint hope that order and decency can be maintained. It never works out.

The group's descent into the lap of Negan (Jeffrey Dean Morgan) and his followers is a natural progression in this horrifying, dystopian world. It is the arrival at the very bottom, where only violence prevails. Those flesh-eating zombies that roam the Earth looking for food? That's nothing. Authentic evil, that thing that should truly frighten anyone, exists inside the people who survived the apocalypse. Trying to rise above that is a waste of time. Kill or be killed. And that's the brutal message of the series, a message that is far more soul-destroying than Negan beating people to death with his baseball bat.

Giving up on The Walking Dead would be ridiculous at this point. It was always heading toward this terrible darkness. Anyone who believes otherwise is naive.

What undermines the show much more forcefully than the extreme violence and gore is the extreme verbosity and posturing of the key characters. We get that Negan is a monster and must emasculate and own every man who crosses him. And it's nice that Jeffrey Dean Morgan approaches the role with such relish. But he's taking about 30 minutes to say what could be stated to his victims and to viewers in five minutes.

Most people who watch and follow The Walking Dead are unfamiliar with the source material, the comic books created by Robert Kirkman. It really should not matter that you haven't studied them. But one useful point emerges from the depiction of Negan in the original material – he's foul-mouthed but not grandiloquent.

Terrible things will happen this season and Rick Grimes (Andrew Lincoln) will be forced to make appalling decisions. As long as he doesn't become as verbose as Negan, the show will continue to be gripping, grim and, yes, shockingly violent. All of that is acceptable if you've come this far with the story. It's the long-windedness that's the most worrying of all.

John Doyle: Second Jen's diversity is good, but its comedy is mediocre
October 26, 2016
John Doyle: A tale of sugar daddies and transactional dating – a big so what?
October 25, 2016 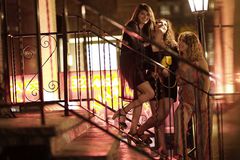 John Doyle: Trump TV would be mad, bad, dangerous
October 24, 2016
Follow John Doyle on Twitter @MisterJohnDoyle
Report an error Editorial code of conduct
Due to technical reasons, we have temporarily removed commenting from our articles. We hope to have this fixed soon. Thank you for your patience. If you are looking to give feedback on our new site, please send it along to feedback@globeandmail.com. If you want to write a letter to the editor, please forward to letters@globeandmail.com.
Comments