It's raining angst-ridden men. No, seriously, it is. They're pouring out of cable shows.

Possibly, you knew that. Since it all started with Tony Soprano and has continued through Don Draper, Walter White and that genius doctor on The Knick. And, right now, there's the tortured husband on The Affair (Sunday, TMN/Movie Central, 10 p.m.). The sheer volume has raised hackles. This great age of TV is dominated by the brooding of middle-aged guys who, mainly, have issues with women.

Well, in the ever-expanding annals of male angst, Neil Truman is different. He's not terrifically handsome or brave and he's a bit physically awkward. Also, he really likes his wife and daughter.

Satisfaction (Sunday, Showcase, 10 p.m.) is about Neil. It's a show with a terrific first episode that sets up a truly intriguing storyline. And, yes, it's maddening on the matter of male angst. But in an admirable shift, it pivots on Neil (Matt Passmore) making a discovery about his wife, Grace (Stephanie Szostak) and her troubles.

"I have what every man in America wants," Neil says at the start. He means a big TV, a loving wife of 18 years, a daughter he adores, a nice house and a well-paying job. Then he asks: "What the hell is wrong with me?" Neil, you see, is in midlife crisis mode. An investments guy, he's good at his job, works 70-hour weeks and earns loads of money. But he's not satisfied.

In a flurry of developments, he tells his boss: "We don't contribute anything to the world in any meaningful way. We just hoard money." He has a meltdown on a plane that's delayed leaving the airport – it's a great scene – quits his job, and announces: "I need a vacation." And then he goes home. To discover his wife with another man. But – and it's a huge "but" – this development is not what he thinks.

With some deftness, the drama then shifts back in time six months. And we learn that his wife Grace has her own issues and is doing something radical about it. It is his wife who is truly unsatisfied. She's been on a personal journey – a bender, actually – for months. To complicate matters, there follows a wonderful sequence in which Neil sees his teenage daughter perform a song at a high-school event. All hell breaks loose.

Satisfaction might be deeply cynical about marriage. Or it might not. It's difficult to tell where this is going. But it is certainly on the nail about money. It's all about money, this search for satisfaction. There are themes thrown around, about sex, fidelity, parenting, Zen. But the core scene occurs when Neil's boss offers him a lot of money. And Neil says: "I don't care about the money!" So the boss asks: "Okay, what do you care about?" His answer is never heard and one suspects it hinges on how the money is actually earned.

Created by Sean Jablonski (who worked on Nip/Tuck) Satisfaction is, in a way, about all the lonely people, and asks: "Where do they all come from?" Don't look for social realism in it. This is fiction that posits something that will make some viewers deeply uncomfortable – there is great satisfaction to be found in cynicism.

I am Evel Knievel (Saturday, HBO Canada, 8 p.m.) is this: "An in-depth look at the story of legendary, original daredevil, Evel Knievel, who paved the way for those who risk it all. Featuring interviews with Matthew McConaughey, Michelle Rodriguez, Kid Rock, Guy Fieri, and a host of family, friends and collaborators, the documentary weaves archival footage with exclusive interviews."

Mad Dog: The Secret World of Gaddafi (Sunday 10 p.m., CBC NN on The Passionate Eye) is a repeat. But since it first aired on the night the most recent Mad Men season began, it might have been missed. It's a doozy – both salacious and sobering. Filmmaker Christopher Olgiati is not much interested in the politics of Moammar Gadhafi's rise to power or the intricacies of his relations with Western powers. (It was Ronald Reagan who referred to him as "Mad Dog.") His concern is with offering evidence of the late Libyan dictator's bizarre, brutal rule. The torture of perceived enemies is seen; the capture and abuse of young women for Gadhafi's sons' pleasure is documented. While the documentary openly sneers at Gadhafi and his sons, the ultimate result is deeply disturbing. It illuminates a barbarity hidden for so long.

A taboo relationship from both sides of The Affair
October 10, 2014 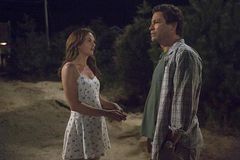 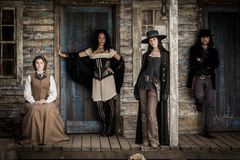 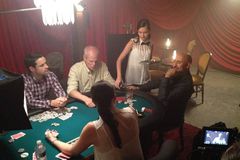