Sometimes a person – me, in this case – figures out what's going on and what obsesses people just by reading the mail.

In recent weeks, I've been getting, without asking, reader views on who should replace Pastor Mansbridge on CBC's The National. People take the matter very seriously. They write detailed critiques of the potential candidates, outlining strengths and weaknesses. It's an obsession. Okay, maybe a small obsession. The mail about Donald Trump and CNN outweighs conjecture on Peter Mansbridge's replacements.

There seems to be no point in reminding some people that, as far as one knows, there won't be one anchor on the new National. It might be several, anchoring from several cities. It might be a rotating group. Nope. Doesn't matter. Readers of this great newspaper and this little column want their views on certain CBC individuals known. To me, anyway. Such is the volume of mail it is incumbent upon me to report.

Rosemary Barton divides CBC viewers. To some, her "reading" (that's the most common term) of The National immediately after Mansbridge said his goodbyes, reeks of "coldness." On the other hand, a number of readers are devoted to Barton, finding her work on Power & Politics to be "refreshing." Mind you, Power & Politics is a show watched by a small number of fanatics and persons who work in Ottawa writing about politics.

The "coldness" thing is interesting. It illustrates what women face working on TV and how brutally dismissive some viewers are. On occasion, this column is nowhere near as blunt as many readers. Wendy Mesley's name has come up often. She has been described to me as "a cold fish." Also as "shallow and dull." And, "About as warm as a wet blanket."

In part, the matter of Mesley is simply familiarity and fatigue with her. Her CBC News tenure is already long. Still, some readers are convinced she has the job of anchoring The National in the bag already. A certain distinguished Canadian actor wrote to me, unprompted, and declared The National should be co-hosted by Mark Kelly and Mesley.

Someone else wrote to express suspicion that Mesley's win at the Canadian Screen Awards – for best host or interviewer in a news or information program or series – means that she's the front-runner.

Ian Hanomansing has many fans. As in, a lot. The adjective used most often about him is "pleasant." However, the peculiarity of that multihours-long news thing he hosts on CBC News Network irritates some people. Those views can be summed up in one reader's remark: "If he didn't wander around so much, I could focus more on what he says."

Heather Hiscox and Alison Smith, the latter now with CPAC, are also in the running, according to several correspondents. And me, I was shocked – shocked, I tell you – that Amanda Lang's name hasn't come up once. People have short memories, obviously.

Also, and this is all I'm saying for now, and it's only because readers have sucked me into this game, I think viewers should think about Nil Koksal in the role.

For all we know, the nabobs of news at CBC are trawling the talent on The Weather Network seeking multiple replacements for Pastor Mansbridge. That's fine. No doubt the decision will come through an extremely tortured process and, when The National is relaunched this fall, everybody will hate it.

However, the fact that readers are speculating about The National is good news for CBC. It's not as if nobody cares. The flow of suggestions about The National also comes simultaneous with the 2017 Reuters Institute Digital News Report, which covers Canada as well as several other countries.

The report finds that Canadians surveyed still view traditional media as the most trustworthy news source. About 70 per cent get some of their news from TV. Many Canadians get their news online, but that means the online offshoots of TV channels, plus newspapers and magazines.

A summary of the report says, "Canadians are concerned about unreliable information and fake news, especially since the U.S. election campaign where such content was widely circulated. But their level of trust in the media remains relatively strong in comparison to other countries."

By all means, keep sending me your thoughts and suggestions. It makes a change from strong suggestions that I do unprintable things to myself and that CNN is totally fake news. 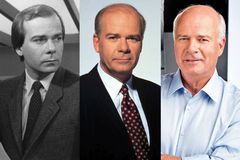