John Dunsworth, a generous mentor and gifted character actor beloved for his portrayal of the whisky-addled but determined trailer-park supervisor Jim Lahey in the long-running Canadian comedy series Trailer Park Boys, died on Oct. 16. He was 71.

"He was so real, so believable," said Barrie Dunn, a Trailer Park Boys actor-producer whose relationship with Mr. Dunsworth stretched back to work with the Neptune Theatre Company in Halifax in the late 1970s. "So many actors, when they get in front of the camera they lose authenticity. But John never did."

Mr. Dunsworth is best known as his Lahey character; the actor himself identified on Facebook as "John Dunsworth a.k.a. Mr. Lahey." But to strictly identify him with that role would do a great disservice to the actor and to the man. He played Santa Claus and Shakespeare's Shylock, and a priest, a banker, a doctor, a police detective and, on the supernatural-drama television series Haven, a peculiar newspaperman. And although his Sunnyvale Trailer Park overseer was a booze-swilling grouch in lawman sunglasses, Mr. Dunsworth was kind-hearted and closer to a teetotaller than an alcoholic.

"John wasn't a drinker or even a reformed drinker. Just a good actor," says Mike Clattenburg, Trailer Park Boys creator and close friend to Mr. Dunsworth. "He was a studied actor who did months of preparation to add dimension and, most of all, humanity to his roles. He made us even care about Jim Lahey."

Mr. Dunsworth's meticulousness – "John didn't wing it," according to Mr. Clattenburg – was exemplified with the film Santa Quest, a 2014 feature documentary which followed Mr. Dunsworth's participation in a competition to find the best Santa Claus in the world. In attempting to become the quintessential Kringle and to fulfill his own spiritual quest, the actor trained at the Calgary Santa School before visiting the Basilica of St. Nicholas in Italy and the Santa Village in Finland on his way to the Santa Winter Games in Sweden.

The truth of the matter was that Mr. Dunsworth already had experience in the ho-ho-ho business. "I was doing theatre here in Halifax in the 1970s and of course there's never enough money in the theatre," the native Nova Scotian told The Globe and Mail in 2013.

"I went to get a job at Simpsons playing Santa in the store at Christmas. When the woman doing the hiring heard I was an actor at the Neptune, a real actor, she paid me double what she was supposed to pay. 'It's all acting work,' I told her, and she agreed. There were some fun times playing Santa. I remember a kid who sat on my knee and he wanted Santa to bring him all kinds of things. Expensive things. So I told him that Santa could only deliver one special gift. He was furious, this kid. He jumped off my knee and said, 'I'm going over to the Eaton's Santa and he'll tell me he can bring me anything I want!'"

As for gifts, those who knew him well vouch for his generosity with fellow actors and his exuberance when it came to his trade. "He would never give an actor a note, but he was very much a teacher," Mr. Dunn says. "Without being pedantic, he would help an actor get though a scene."

Outside of acting, he was a stellar bridge player and a Scrabble-playing whiz content to be on one of the many boats he owned over the years. A do-it-himself stone mason, he drove an old truck with a thousand-pound winch that he used to haul granite for landscaping.

After his death, testimonies from fellow actors flooded social-media outlets.

Mike Smith, who plays Bubbles, the most loveable of the show's three ne'er-do-well protagonists, described Mr. Dunsworth as a beautiful guy. "Brilliant and fascinating," he tweeted.

It was Mr. Dunsworth's excitement and positive manner that stood out for Mr. Clattenburg. "John wasn't afraid to let go or to take chances, and he found great joy performing for two people or thousands."

Indeed, during media interviews, the actor would drift in and out of various characters. "He cherished being in the moment as an actor and often acted just to act," Mr. Clattenburg says. "He was sincerely grateful for his success and loved meeting fans as much as they did meeting him."

John Francis Dunsworth was born in Bridgewater, N.S., on April 12, 1946, the second of Frank and Frances Dunsworth's 10 children. He grew up in Halifax, where, according to an interview on CBC's At the Table, he "didn't have the foggiest notion" he would ever become an actor.

After dropping out of Dalhousie in the mid-1960s, he drifted, ending up at the University of Guelph where he took drama as an elective course. "I decided then and there that I don't care if I go broke in my life, I am going to be an actor, because I love to live in other people's shoes," he told the CBC in a 2010 interview.

Speaking to The Globe, Mr. Dunsworth said acting saved him from whatever was ailing him as a young man. "I was a will o' the wisp then, no direction at all. And then this acting thing just consumed me. I think it was the collaboration, the support that comes from being in a production. I think maybe I was looking for that collective support you get in a big family. And I found it in acting."

In 1970, he convinced Halifax officials to lease to him a shabby building by the city's shipyards, which he and his wife, Elizabeth (née Bates), turned into a home for a pioneering alternative theatre company, Pier One Theatre. He also appeared in CBC Radio dramas and productions at Neptune, including Shakespeare's The Taming of the Shrew. In that, he played the crotchety character Gremio, an elderly suitor vying for the affections of a woman against a younger man, played by an actor who would later become his friend and Trailer Park Boys co-star.

"Before walking off the stage during a scene, John took a bite of an onion and exhaled as he snarled at me," Mr. Dunn recalls. "He was trying to tell me, as his character, that in this rivalry between us he was going to win and I had better watch out.

"I just about fell off the stage."

Mr. Dunsworth's bio notes that he drove a cab for a few years and worked the CN trains from Halifax to Sydney. He taught acting at Dalhousie University, and, in 1987, he founded Filmworks Casting, where he worked as a casting director.

In the late 1990s, Mr. Dunsworth was scouring Halifax's elementary schools for acting talent for the CBC series Pit Pony, a period drama about life in a coal-mining community. Visiting the Halifax Grammar School, he came across a "committed little thing" who had starred in the school's production of Charlie and the Chocolate Factory. Her name was Ellen Page.

Before winning acclaim and an Academy Award nomination for her role in 2007's Juno, Ms. Page appeared on Pit Pony and briefly played Mr. Lahey's daughter on Trailer Park Boys. The link between the two series was Mr. Clattenberg, who directed episodes of Pit Pony before creating Trailer Park Boys.

"John was the strongest actor I knew of in Halifax and also the zaniest," Mr. Clattenberg recalls. "I was aware of his dramatic ability and also his gregarious, hilarious side. He had this keen willingness to play and experiment."

The director cast Mr. Dunsworth in One Last Shot, an unreleased black-and-white short which became the basis for Trailer Park Boys. That the series took off surprised Mr. Dunsworth, who related a story to The Globe about being in a boat on a lake with the director, who told the actor that he would become famous for the role.

"Frankly, I didn't believe him. About five minutes later, another boat goes by, slows down, and somebody shouts, 'Hey, Lahey!'"

The popular mockumentary about the colourful, occasionally felonious characters of a fictional community in Dartmouth, N.S., lasted seven seasons on Showcase, from 2001 to 2008. Three feature films were also released, and, in 2014, the show was revived for Netflix.

Although Mr. Dunsworth himself was not an alcoholic, he did have an addiction. He was one of the subjects of Playing The Machines, a 2009 documentary on video lottery terminals. The actor estimated he'd lost $50,000 to $100,000 on the gambling kiosks scattered through pubs, corner stores and casinos in Nova Scotia.

A five-year addiction took over his life. "I don't do cocaine, but I'm getting the same kind of rush," Mr. Dunsworth told The Globe about his gambling jones. "It's a sickness that governments don't [care] about as long as they keep getting the revenues."

In an attempt to draw attention to the machines' powerful sway, Mr. Dunsworth formed the group Game Over VLTs. 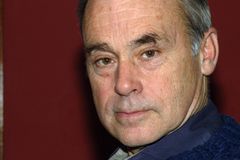 There are hard-working actors – then there’s John Dunsworth
November 30, 2013 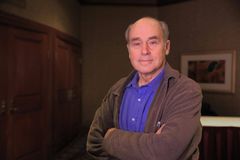