Last Saturday night, Hannibal creator Bryan Fuller took it upon himself to live-tweet the season (and probably series) finale of his own show. As he shared comical cannibal commentary, behind-the-scenes snaps and fan thank-yous, it occurred to me that his Twitter feed was a good example of the revolutionary transparency Fuller offered throughout the show's brief run. He's never been afraid to lift the curtain and invite criticism, and when a casual group photo of this season's writing team went up, I found myself counting the men and the women to confirm a relatively even split.

Fuller knows full well that when it comes to equal representation, we're now a culture that counts. He's been clear with fans not only about Hannibal's tenuous fate, but also the decisions that went into creating it – making the show a more fan/creator collaborative process rather than something just dished up to be consumed, whether you liked it or not. Fuller's focus was not only on respectfully serving his fan base, but in the deliberate diversity of his cast and crew.

Despite being led by two white males, the show gave us an assortment of complex, deliciously flawed female characters. Fuller deliberately chose not to use rape as an exploitative narrative trope, and he thoughtfully recast iconic film roles as women and people of colour. Fuller represents a necessary new breed of showrunner: happily tapped into the political conversations we're having about the media we consume, and appreciating that viewers no longer need to tolerate the status quo.

Yet even with this new crop of discerning viewers and socially attuned showrunners, the statistics on who gets to be a part of the television-making universe remain bleak: White males still dominate the most desired positions in the TV world. According to a recently concluded five-year study by the Director's Guild of America, women get just 18 per cent of television's first-time director slots, while people of colour, male and female, see only 13 per cent.

Further, the DGA released its annual list of television's worst offenders when it comes to directorial representation, rightly calling out shows that had no "minorities" (the DGA's term) or women at all. The list of high-profile zero-per-cent shows is alarmingly long, with a full 27 seeing no women or minorities behind the camera. (A full 61 shows listed sat below 15 per cent.)

Perhaps unsurprisingly, noted machismo network HBO had among the worst records for director diversity – shows such as the Prohibition-era Boardwalk Empire and the political satire The Brink saw exclusively white men at the episodic helm. Even more women-centric efforts, such as the CBS sitcom Two Broke Girls (zero per cent) and Showtime drama Nurse Jackie (8 per cent) failed miserably on that same front.

Only BET hit the 100-per-cent mark, with three shows (Being Mary Jane, The Game and Single Ladies) at the top of the DGA's "best" list. FOX's addictive hip-hop saga Empire also did well at 82 per cent, while ABC's American Crime and Showtime's Homeland brought in hopeful numbers at 80 per cent and 67 per cent, respectively.

Over all, women directed a meagre 16 per cent of all of the 3,910 episodes examined by the DGA, an increase from 14 per cent the prior year, while minorities (both male and female) directed 18 per cent of all episodes, representing a 1-per-cent decrease.

There's something depressingly comical about the fact that white men are dominating the direction of shows such as Veep, Pretty Little Liars and even Girls, and the DGA has created a "diversity task force" to confront these kinds of flawed hiring practices. They've also formed a number of committees that address race and gender disparity through "meetings, seminars, networking, training and events."

But in terms of driving real change, the most vital catalyst is the informed viewing habits of television audiences, and their demand for something better – and studies show it's working.

A 2015 UCLA Flipping The Script report concluded that "diversity sells," with shows offering representation on screen tending to excel in ratings compared with their predominantly white male counterparts – it would seem business as usual simply can no longer sustain itself.

ABC, for example, sees some of its highest ratings from Scandal and How to Get Away with Murder, two shows that feature robustly written women of colour as their leads. With enthusiastic audience support, creator Shonda Rhimes has evolved into one of the more successful showrunners on television, with a new effort, The Catch, on deck with ABC this fall. That series, about a female fraud investigator conned by her fiancé, features three women with executive-producer credits, and was created by Jennifer Schuur, a notable Hannibal contributor herself. (Schuur is responsible for writing the only episode pulled due to controversial content.)

The numbers from the DGA's task force certainly don't tell the whole story in terms of diversity on television, (Hannibal, despite being notably woman-friendly, is still part of that loathsome zero per cent club), but they're definitely a start when it comes to exposing systemic inequity. Cold statistics can act as the window to television's soul, and armed with that information, viewers can voice their opinions, and make strategic viewing decisions in terms of what they're willing to tolerate and what they're not. When shows are made publicly accountable for their hiring practices, and become transparent about their decisions, balance finally becomes possible.

While it's true that the explosion of TV series on a variety of platforms has facilitated greater on-screen representation than its cinematic counterparts, carving out a space for people who might otherwise be ignored on film, it would seem that white men are still driving most of these fundamental diversity decisions. What good is representation when it's still enforced by the same gatekeepers?

Although casual viewers can't be expected to research the gender and race makeup of every show they relax to on a Wednesday night, publicizing these findings is a step in the right direction. The more showrunners who realize and care that we're a culture that's counting, the better.

Hannibal fans will be dining out on this one for years
July 24, 2015 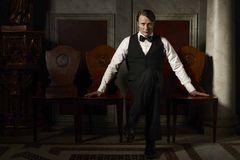 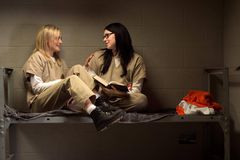