Like Sex and the City – only set in San Francisco! Like Girls – only with guys! Gay guys! In broad strokes, those were probably the elevator pitches for HBO's new drama Looking, which premiered this week and tells the story of three gay men, each lost in his own way.

The show does owe obvious debts to those pioneering series. Without the raunchy antics of Kim Cattrall's Samantha, you likely couldn't, even on cable, begin a TV show with its lead character (Jonathan Groff, formerly of Glee) hooking up with a stranger in a park. (The way we live now: During his quickie, his mobile goes off, and he takes the call.) More broadly, Girls' Lena Dunham has arguably made it possible for this species of dry, knowing wit to reach the air.

Like Dunham, Looking writer Michael Lannan mercilessly bares his characters' faults, efficiently setting out the traps from which they're trying to escape. Patrick (Groff) is a computer-game developer on the cusp of 30, looking for love but sabotaging himself at every turn. "Why," he asks, "do I go on so many bad dates?" The hunky Dom (Murray Bartlett) wants to stop waiting tables before he exits his 30s, and finds a possible career mentor in a bathhouse. Frustrated artist Agustin (Frankie J. Alvarez) draws closer to his boyfriend (O.T. Fagbenle) by moving in with him – so far, so conventional – and then by trying their first threesome. (The clincher: Both Agustin and his boyfriend are attracted to the third man's new tattoo of Dolly Parton's signature.)

Looking's relatively sexy content isn't used just to titillate and set up good punchlines, as the exploits of Samantha so often were. The show's bawdiness seems an authentic reflection of the gay community's obsession with finding yourself through pushing and playing with your sexual limits. Patrick's queasiness about man-on-man sex and his awkward dating failures reflect his discomfort with his own sexuality, and his desire to somehow please a demanding (off-screen) mother. But why be a mild disappointment, his friends tell him, when you can be a big, outrageous flaming one? And so they push him to cruise that park on a dare – "Do they even still do that?" – and to try on a leather vest, and a leather persona, in the annual celebration of all things fetish, the Folsom Street Fair.

Looking's San Francisco feels right, too. There's a decadent tech launch party, complete with a rented destroyer to celebrate the release of a Navy-themed game. There are yoga-meets-Zumba classes. There's the ultraserious approach locals take to food. (A restaurant patron solidifies Dom's desire to leave off waiting tables with an aggressively pretentious order; Patrick is more shocked when Agustin eats meat than when he proposes to hire a male prostitute for an art project.)

Director Andrew Haigh served up an unvarnished vision of his native Nottingham, England, in Weekend, and his presentation of the City by the Bay is grubby, its mood dark; its frequent fogs obscure the cityscape. A former local, writer Lannan approved of Haigh's unglamorous approach: "We wanted to shoot what it's really like on the street here, in a bar, an apartment, to feel those spaces in the way people who live here feel them."

Although the series brings much that is its own to the table, it owes one more obvious debt: to Armistead Maupin's Tales of the City, first brought to TV in the early nineties. Back in the day, HBO balked at making a miniseries of Maupin's serialized novels. There was too much marijuana, network executives felt, and they decided against airing a show that celebrated gay sexuality at the height of the AIDS crisis.

In the end, the network left it to Britain's Channel 4 to do a bang-up job, and Looking feels, in a way, like elaborate penance for HBO's long-ago failure of nerve. Dom bears more than a passing resemblance to Maupin's most charming invention, Michael (Mouse) Tolliver, and the bathhouse scene in the new show follows directly from some scenes set in a similar steamy locale in Tales.

Lannan does pay tribute to Maupin here, but moves smartly on to present his own updated tale of this city. His and Haigh's San Francisco is a sadder, less exuberant, somehow more sour place. In this steam room, Dom says to another, older man, "It was cool back then, wasn't it?"

Still, the show enjoys milking what absurdities there are in this moment, and the argot is spot-on. Here is Patrick reviewing the photos on a dating site: "Instagram filters have ruined everything and I can't tell if this guy's hot or not." When Dom, the oldest, most stereotypically masculine of the trio, scowls at Agustin and Patrick, one of them takes him down, "Ooh, Daddy's in a mood." When a hesitant Patrick keeps his T-shirt on as he tries on that leather vest, his friends mock him. "What?" he rejoins. "It's leather casual."

The cast are the beneficiaries of the strong writing – and they've found the characters, if not yet settled into a groove with each other. One stand-out among the lesser characters is naturally funny Lauren Weedman, playing Dom's wry roommate, Doris. She steals nearly every scene she's in.

Growing up in the 1980s, I had mainly coded gay novels like

Brideshead Revisited and some equally encrypted films along the lines of Breakfast at Tiffany's in which to try to see myself, my possible future; almost none of them ended well for the desperately unhappy heroes. Looking's characters even come a distance from the chief gays on nineties TV: None of the trio is at one extreme of the self-loathing, stuck-up Will (of Will & Grace), or the cartoonishly out-there Jack. And they all get to kiss, and more, onscreen.

Looking's characters aren't all things to all people – there will doubtless be carping in some quarters that, while the cast is more diverse than that of Girls, there's no transsexual character. But these men are living complicated, rounded lives. And the show's message is not "Gays, they're just like us"; Looking is not (at least not yet) about same-sex marriage and two-mommy, two-daddy child-rearing. These are not Modern Family's cuddly, neurotic gay dads.

Looking's subject is the radical seeking that can happen when more conventional paths are closed off. Patrick, Dom and Agustin will need to improvise their way toward more satisfying careers, to go after the love and sex lives they ultimately decide they want.

To complete a profile on OkCupid, Patrick's dating site of choice, you have to specify what you think you're looking for – the source of the show's title. To that and other questions, Looking, so far, refuses to supply easy answers for its lost boys. 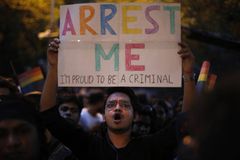