It's entertainment for the Edward Snowden age.

TV viewers looking online for information about the new James Spader drama The Blacklist, which premiered this week on NBC, may find themselves being mercilessly interrogated by a pair of U.S. federal agents.

At least, that's the hope of the network and a little-known digital agency in downtown Toronto that is starting to turn heads in the U.S. TV world.

When visitors to AreYouOnTheBlacklist.com use their Facebook accounts to log in, a video pops up in which a pair of actors from the show begin to press them about possible connections to a secret list of master criminals. As they do so, the actors hold up photos of the user's real friends and associates, which have been pulled in from Facebook. The effect is unnverving. "We don't think you're responsible, but it is important that you tell us which one of your contacts is – immediately," says Megan Boone, who plays the rookie FBI agent Elizabeth Keen. After the interrogation is over, people can share the link on Twitter or Facebook.

The website app was produced by Secret Location, a six-year-old company whose loft-like space buzzes quietly with about 35 full-time staff churning out code to create online experiences. Rooted in advertising, the agency has transformed into one of the hottest shops in Canada helping desperate television programmers engage audiences through so-called second-screen or social TV apps. The company landed on NBC's radar after snagging an International Emmy Award for an interactive game in which fans of the Showcase drama Endgame had to solve the kidnapping of one of their Facebook friends.

But Secret Location doesn't just work in drama; it is building something now to help promote the new Will Ferrell-produced comedy The Spoils of Babylon on the U.S. cable channel IFC; has helped broadcasters connect with reality-show audiences; and is up for an another International Emmy next month for its work with the PBS show Frontline.

In the past few years, broadcasters beset by growing competition from alternative services such as Netflix have been running madly off in all directions. But they are starting to find that digital experiences such as those devised by Secret Location can be a secret weapon. For even as viewers use streaming services to binge on whole series at once, they still long to connect with others – a phenomenon best served by traditional TV programmers offering second-screen accompaniments.

"If we create digital alternatives, it makes them want to have our show as appointment viewing," says Christine Shipton, vice-president of original content for Shaw Media, which owns Global television (the Canadian broadcaster of The Blacklist) and a collection of specialty channels. "It's all about trying to drive some immediacy of viewing."

Digital savviness is so important to success in the traditional television business that, this week, Andrew Wallenstein, the editor-in-chief, digital, of the trade paper Variety lauded the recent promotions of three executives in Hollywood for whom "digital media is core to [their] DNA."

Added Wallenstein, "Websites, social media, mobile devices – these things that occupied the fringes of a studio's strategic outlook have to be brought front-and-centre."

And second-screen experiences are not just an element of marketing; their developers are now a key part of the creative process for some shows. Last year, as Shipton was overseeing the creation of the first Canadian edition of the long-running reality series Big Brother for Shaw's Slice network, she brought in Secret Location to develop Power Play, a "social game" – an online game designed for tablets, smartphones, and computers that enables viewers to connect with each other and the characters on the show. Viewers are able to earn points by completing a variety of tasks, and then spend those points to wield influence over the action on the actual show.

Secret Location worked side-by-side with Big Brother Canada's producers at Insight Productions, even before the show was cast, to suggest changes in scenes that would be most likely to spur viewers into interacting with the action on-screen. When producers wanted to have contestants perform pedicures, for example, "you've got a digital person sitting there, saying, 'Why don't we do a vote online for what colour nail polish they should paint on the toes?'" says Shipton.

"I view them as a co-producer of this project," she adds. "This was the first time I'd worked in that kind of configuration, and I just believe the success of that show was because of that."

The network says average ratings were in the neighbourhood of 700,000, which included about 400,000 viewers in the key demographic of 25-to-54-year-olds: a 77-per-cent spike from the same time slot one year earlier. "That's extraordinary for a specialty network," suggests Shipton.

Secret Location was founded in 2007 when James Milward, a former TV-commercial production manager who had done a program in interactive media at the Canadian Film Centre, felt there was room for a digital agency that could bridge the worlds between traditional television production and the coding nerds.

For the Blacklist project, Milward says, Secret Location was up against 10 other companies for the assignment. "We know how to work with writers," he says. "With The Blacklist, there was a whole bunch of technology companies pitching." But it takes experience to know how to deal with talent. "We're the guys who are going to go on set and make sure James Spader doesn't lose his mind on somebody."

The company has also made a foray into current affairs. Last year, Secret Location worked with the PBS program Frontline to produce a short interactive documentary about the new ways campaigns were micro-targeting voters during the 2012 presidential election. Visitors to a special Frontline website who answered eight questions about their demographic profile and media practices were shown a customized documentary made up of clips about those very subjects.

Milward acknowledges it's still difficult to draw a direct connection between a compelling second-screen experience and higher television ratings for a particular show. "They're still figuring it out, but they know they can't do nothing," he says.

"Everyone has a gut feeling that it's benefiting them in some way," he adds. "Within any creative business, there's an appetite to do cool, creative work. It's just good brand-building, good to be seen as cool."

'In with the old, in with the new' approach pays off for Arcade Fire
September 19, 2013 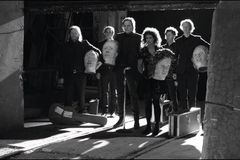