In the early morning darkness a tall, thin young lady who works for some broadcaster or other, totters around on stilettos handing out gifties. A small, plastic clutch purse is given to me. Armed with this, I await further developments.

What happens next is out of the darkness emerges Naomi Campbell, dressed in white, tall, ramrod-straight and accompanied by two other figures of similar demeanour. These three thin, ghoulish figures then sit and stare at about 100 members of the Television Critics Association press tour. As the lights go up, it is determined that Campbell is accompanied by fellow supermodels Karolina Kurkova and Coco Rocha.

Their mission Monday, it can now be revealed, was to promote a much ballyhooed show called The Face. It's a model-competition series starting next month on Oxygen, one of those channels that airs modelling-competition shows.

Mind you, at the time, the trio did look like their true mission was to mimic the banshee figures of Celtic mythology and go about frightening people in the near-dawn hours.

I've nothing against supermodels. Getting paid vast amounts of money to pose in clothes and glare angrily at the camera while doing so is one of those jobs that defy credibility but still exist. Well done to those who can get away with it.

The Face, you should know, is not like America's Next Top Model. Totally, no way. For a start, it has Campbell, Kurkova and Rocha involved, not some losers. What happens, apparently, is that each supermodel chooses a posse of young wannabe models, trains them, and the posse members then compete to be the face of ULTA Beauty, a retail chain that peddles beauty products.

Look, people, it involves skinny women competing through tears and tantrums, and this is exactly the sort of thing that a lot of people want to see on TV.

Campbell was prodded into explaining her mission with this new TV show, of which she is executive producer as well as a star. It is, she said, "to give back," to pass on all that she has learned in 26 years of modelling. She is a role model, not just a model, you see. It is about taking good care of the aspiring models: "I'm not a shrink, a certified shrink, but I felt like one because I had to, like, be there to hear everything, their family history, their background, their tragedies, their ups and downs … I felt an overall protection to all the girls."

This is all perfectly plausible, of course. Given her experience, Campbell has much to convey. And it would be very unkind to mention that her experience includes throwing a mobile phone at her personal assistant (she pleaded guilt to assault and was ordered to attend anger-management courses), assaulting her housekeeper (she pleaded guilty and was ordered to do community service) and being banned from flying on British Airways because she spat at police officers at Heathrow airport (again, she pleaded guilty to assault and was fined and ordered to do community service). Perhaps because it would be unkind, nobody mentioned it. Or perhaps because of the presence of a very large security guard near Campbell, nobody mentioned it. Besides, it ill behooves mere mortals to mention such matters in the context of Campbell being a role model, not just a model.

Anyhoo. Campbell was talking on and on about the "hopeful journey" of the aspiring models on The Face when Rocha, the Canadian among the trio of banshees, felt moved to direct our attention to the true meaning of The Face. It's all about rejection, apparently – the tragedy of rejection that is rampant in the modelling community, and the toll it takes.

She made a heartfelt attempt to explain her point and addressed the TV critics directly, plaintively. "We were trying to teach these girls as well, because, honestly, when you guys get rejected, it's because of a story that you wrote, because it wasn't perfect, it didn't write correctly, whatever. But for us, you look at us and you go, 'I don't like her nose.' That's it. That's why I didn't get the job. 'I don't like her thighs.' That's it. And I'm thinking, well, I have so much more to give you. I have a brain. I have a personality. So we try and teach these girls that, although we love who you are, you have to have this thick skin, and especially when we're out there and we're looking on the blogs and seeing what people have to write about us, they go, 'I don't care about their sad story. Look at their face.'"

Well, that explained everything. Chastened, I looked down at the small, plastic clutch purse I had been given and, for a moment, I felt the pain that supermodels suffer. I used to think the TV racket was a cruel world. Shows fail. Actors don't get cast. A series ends up competing with The Big Bang Theory for viewers. Now I know that authentic, searing pain is known only by the tall, skinny and beautiful. Because somebody doesn't care for their nose or thighs. The lousy haters. It took a TV show featuring supermodels to teach me that.

Rarely have I been so moved. Or frightened. Oh, my shattered nerves.

P.S.: Rocha was wearing Thierry Mugler. I did ask her, from a safe distance. Access to Campbell and Kurkova was blocked by the large security guard. 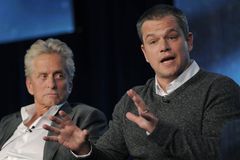 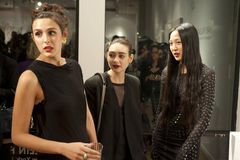 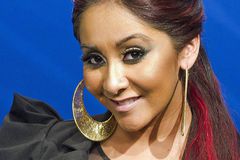 With Fashion Star, product placement is the program
March 12, 2012 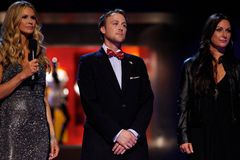 The Bachelor Canada: The race for the rose begins
February 19, 2012 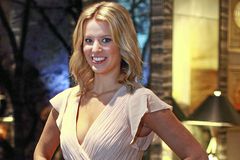