The props department on the set of the TV series Murdoch Mysteries is a busy place: Last season, property master Craig Grant stuck a recumbent bike inside a Thule cargo carrier to create a purely fictional electric car. This season he turned an ultra-light plane into something the Wright brothers might have flown, recreated the first fountain pens that used refillable cartridges and built an early version of a metal detector.

Set in late 19th-century Toronto, the police procedural that starts its sixth season in January is stuffed with old, new technology. Detective William Murdoch, played by Yannick Bisson, is a bit of a nerd, endlessly fascinated by the latest gadgets and rightly convinced they will revolutionize his profession. His vehicles, robots, sensors and scopes – along with many scenes in the morgue and the occasionally gritty depiction of Toronto's streets – give the show a bit of a steampunk vibe. Maybe that is why CBC Television, which has shied away from running much Canadian period drama in recent years, has picked up Murdoch, rescuing it from sometimes erratic scheduling on CITY-TV to launch its sixth season on the national stage.

"Historical doesn't have to mean stuffy," said executive producer and show-runner Peter Mitchell during a break in filming last September. "People should get out of the carriages; they shouldn't be sitting in drawing rooms.… It's historical fact but not precious or mannered. It's not like The Whiteoaks of Jalna, where everyone is proper. They are just folks living in that time: They go to the bar."

Mitchell's reference to a widely criticized CBC historical drama that was aired all the way back in 1972 is telling: Canadians have very long and not always pleasant memories of how their history is represented by the public broadcaster. The CBC is still sometimes perceived as taking a prissy, nostalgic and rural "Anne of Green Gables" approach, even if Road to Avonlea went off the air in 1996, and the network's most recent period drama was the bawdy and British Tudors.

"We did seek out contemporary audiences and period can be seen as a bit of a risk," said Sally Catto, executive director of scripted programming at the CBC, explaining how the emphasis was placed on contemporary settings when the broadcaster first made the shift back to ongoing series from miniseries in the mid 2000s. "Murdoch uses cutting-edge techniques. It doesn't feel like staid period, although it is definitely set in the Victorian era."

The show (which is based on a series of novels by Maureen Jennings) makes many cheeky references to Canadian and foreign historical figures: A very drunk young Winston Churchill is the central character in the second episode of the new season while Sir Wilfrid Laurier put in an appearance during season four, in the episode where Prime Minister Stephen Harper, who is a fan, made a cameo as a politically ignorant constable who doesn't recognize Canada's seventh prime minister. As that example suggests, the humour can sometimes seem forced, specially since the show does occasionally also veer off into startlingly darker territory, acknowledging the ugly prejudices of the day or failing to deliver a morally tidy ending. Still, the results are certainly not sentimental about the past.

With the great success of Downton Abbey on PBS, many broadcasters are enthusiastic about period pieces these days despite the considerable expense of producing historic sets and costumes, and even The Whiteoaks of Jalna is set for a remake over on Global. As the CBC dips its toes back into a Canadian historical setting, it can rely on Murdoch's snappy tone and its ability to draw that elusive family audience, by appealing to both the over 45s and young women, to produce some solid ratings.

"Two girls showed up in Hamilton in full period costume," Mitchell recalls of two fans' visit to the set during shooting on location. "One almost had a Justin Bieber attack when Yannick said hi."

Catto also cites the enduring appeal of procedurals and a setting that is a character in its own right as aspects that attracted the CBC, which has had recent success with shows such as Republic of Doyle and Heartland, that take place in idiosyncratic regional locales. Reruns of Murdoch's season five have already garnered strong audiences on the CBC this fall: An episode that starred Arlene Dickinson of Dragons' Den fame playing a Victorian entrepreneur reached 820,000 viewers.

While the props and costume departments sweat the accuracy of every historical detail, Mitchell says the key to achieving the unstuffy feel is to shoot the action as though it were a current cop show.

"It has to move like a contemporary TV show," he said.

Similarly, Bisson says he has stopped worrying about creating a historical character when he plays the highly intelligent, highly ethical but sometimes sorrowful Murdoch.

"At first I got caught up in that maybe more than I should.… The intent in those days was to appear proper. Etiquette was important. How you drink your tea; what side of the street you walk on. We don't want to be barbaric even if we are on the new frontier.… But then I thought, we have all these people making costumes, building props.… All I have to do is put on my collar and tighten my tie and I'm there."

In the end it turns out that the stiff collar is more literal than figurative on Murdoch Mysteries.

OTHER CBC FORAYS INTO COSTUME DRAMA

A hugely anticipated attempt to make a Canadian version of Britain's Forsyte Saga by adapting the Mazo de la Roche novels, the 1972 miniseries was very expensive, soapy and difficult to follow as it hopped from past to present.

The 1988 Jazz Age miniseries took a more urban but no less melodramatic take, telling a story of two brothers in Montreal after the First World War. It was notable both for its big budget and for an early appearance from actor Paul Gross.

The Road to Avonlea

After winning audiences with TV movies based on the Anne of Green Gables books, the CBC settled into Prince Edward Island for five years, from 1990 to 1996. The series, which featured the same setting but many different characters from Anne of Green Gables, was beloved of audiences, but may explain why critics saw the broadcaster as fusty.

Wind at My Back

The heir to Avonlea in the family drama slot, this series ran from 1996-2001 and took place in a Northern Ontario mining town in the 1930s. Although it did portray the hardships of the Depression and the social prejudices of a small community, it continued the tradition of portraying Canada's past largely as a rural melodrama. 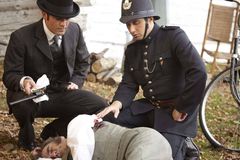