Coming soon on ABC (well, this fall) is the new show Agent Carter. The series will be about the many and varied adventures of one Peggy Carter, the girlfriend of Captain America, during her life after the Captain was frozen at the end of the first Captain America film. Or so I gather.

Hands up those who are totally looking forward to that. Okay, those with your hands up are young and fans of Marvel comics, I see.

It's a special time of the TV season. The Upfronts, where the networks and others in the U.S. TV racket present their wares to advertisers, are under way. Patterns emerge. Cancellations, renewals and new series are announced.

One pattern is the new reliance by the networks on sci-fi, fantasy and superhero shows.

Snookered by cable in the quality drama and sharp comedy areas, networks are heading the way of Hollywood movie studios. They take a familiar figure from comic books or fairy tales and spin weekly series from the material. Thus ABC, the first to make clear its new roster, is renewing Marvel's Agents of S.H.I.E.L.D (season finale tonight ABC, CTV, 8 pm.), Once Upon a Time and adding this Agent Carter thing. These are not cheap shows to make but they are variations on existing franchises, not unknown quantities.

There are some notable absences from the ABC schedule. The comedies The Neighbors, Suburgatory and Trophy Wife (finale tonight, ABC, CTV 9:30 p.m.) are cancelled. None was an outright failure. In fact, all were clever, whimsically satiric shows. The Neighbors began as an exercise in silliness. A couple with two kids move into a New Jersey estate and find that all the neighbours are aliens stranded on a mission to do something or other on Earth. The couple (nicely played by Jami Gertz and Lenny Venito) have to explain U.S. culture to aliens and in doing so, manage to mock a good deal of it.

Trophy Wife was good-natured and sophisticated, a family comedy about a young woman, a "reformed party girl" marrying a guy with judgmental children and manipulative ex-wives. It often drifted into deftly razor-sharp jabs at contemporary middle-class mores. The same can be said of Suburgatory. It seems there's only room on ABC for one strong comedy in that genre, Modern Family, which keeps going and going until it will be running on fumes.

It's increasingly hard for a new series to click with viewers. There's so much competition and the trend is, clearly, toward bankable concepts derived from existing characters and narratives found in comic books or well-known fantasy tales. Meanwhile, also at ABC, the network drearily renews The Bachelor, Shark Tank and America's Funniest Home Videos.

Over at NBC, Community is cancelled after five seasons and all those attempts to have it transcend cult status. (The studio behind it, Sony TV, is believed to be shopping the series to Hulu, Amazon and Netflix.) And after a strong start two seasons ago, the post-apocalyptic drama Revolution is gone. Not much surprise there – it was a good premise but one-note from the start. Interestingly, though, a likely replacement is the series Constantine, based on characters from the DC Comics' Hellblazer graphic novels.

Fox is betting heavily on another superhero show – Gotham, which is in essence a Batman prequel story. It promises "origin-story versions of the Riddler, the Penguin and Catwoman."

So there's your trend – the familiar with established heroes and villains, the fantasy stories with equally familiar figures. Put in a corner, network TV reaches for superheroes to save the day. The trailer for Agent Carter is cute, especially when our heroine beats up a trio of beefy guys. But there's not much dialogue unfolding. It's more "Kapow!" "Bam!" and "Zap!" And that's the future of a good chunk of network TV. You've been warned. 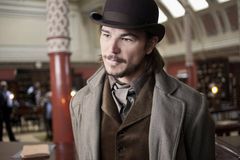 The socially-awkward world of Silicon Valley’s obscenely rich
May 12, 2018 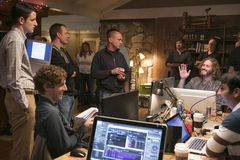