Where Orange Is the New Black's second season went out with a literal bang, with terminal cancer patient Rose plowing down villain Vee in a stolen prison van, season three starts off with a tender whisper. Lacking a manipulative cliffhanger, most of last season's major plotlines were gratefully resolved, freeing up the premiere to get back to the show's best basics. After the dramatic dust settles, OITNB's strength – and the reason we binge-watch this Jenji Kohan creation way past our bedtimes – is the genuine dynamics between its fully fleshed-out female characters.

The delicately played first episode centres around Litchfield Penitentiary's Mother's Day preparations, a perfect backdrop for reacquainting us with the inmates after a year-long hiatus, the show's signature flashbacks extending to multiple characters and their varied connections to motherhood.

Shifting back in time, a preteen Pennsatucky (Taryn Manning) chugs Mountain Dew outside a government office at her bedraggled mom's request, hoping the resulting hyperactivity will get them supplemental security benefits ("$314 a month, isn't that right?"). On the other end of the income spectrum, Nicky (Natasha Lyonne) is scolded by her uptight, tweed-suited mom for putting together an early-morning Mother's Day surprise with the family's housekeeper. "She didn't read my card," the angelic little girl laments – a long way from the potty-mouthed inmate who's now trying to sell heroin out of prison.

In more picturesque tableaus, Poussey (Samira Wiley) reads a comic at bedtime with her doting, now deceased mother, and a past Sophia (played by Laverne Cox's twin brother M. Lamar) lovingly massages the feet of her pregnant wife. We even get a rare look into befuddled corrections officer Sam Healy's twisted childhood, as his mother smears lipstick on the wall and hurls a glass ashtray in his direction before asking him to dance. The not-so-subtle message here is that mothering, both its presence and its absence, defines our path, whether we like it or not. (Thankfully, though, the show doesn't heavy-handedly assert that bad mothers necessarily raise prisoners, or that prisoners are necessarily bad mothers.)

The makeshift celebration of moms in the prison yard provides all sorts of insights into how OITNB's women view the role – some with misguided idealism or cranky charm, others with resentful hatred, and all with assorted feelings of longing. "It must be hard … being in here when you got kids on the outside," Poussey offers to Gloria in the kitchen, before collecting some bowls to set up children's games. The inmates put their best feet forward for the day's visitors, with mini-golf and face-painting, a game of Duck Duck Goose and a both hilarious and depressing discounted Cinco de Mayo pinata hung from a basketball net. "Oh my God, this is such a metaphor for their lives," says dippy activist Soso when no candy falls out of the bright pink papier-mâché pepper.

While most of the haphazardly constructed festivities are played for comedic effect, the show's one-on-one conversations reveal something striking about the way women communicate – basically, that we acknowledge things are terrible, but we find a way to help each other get by. You can feel this in Aleida's frank talk to her pregnant and scared daughter: "You're never tight again. I mean you can work it back a little, but it's never the same after you've torn that shit up. And you always pee yourself a little when you sneeze, and you never really sleep again. It's not all bad. You end up with a baby." (A flashback generously reveals that her cynicism is not entirely authentic.)

Beyond this comprehensive meditation on the complexities of parenting, the premiere yields some narrative housekeeping, including an update on Joe Caputo's efforts to clean up the prison after a scandal. But the episode's strongest and smartest scene comes from the former meth addict and born-again Christian, Pennsatucky, who walks away from the crowd of revellers to set up a makeshift Popsicle-stick graveyard representing the six abortions she's had.

"I'm sorry I never got to be your momma," she says while pouring out some Mountain Dew in memory. Crying and convinced she's going to hell, she's comforted by Big Boo, who provides some sage words of wisdom from (of all things) Freakonomics. She explains that the book attributes a drop in crime in the 1990s to the 1973 U.S. Supreme Court decision, Roe v. Wade; "Children who, had their mothers been forced to have them, would have grown up poor, neglected and abused – the most important ingredients when making a felon."

"That makes me feel a little better, actually," Pennsatucky says, understanding that she ultimately did what was best for her children. It's rare to see complex feelings around abortion spoken about so matter-of-factly on television, the fraught reality of Pennsatucky's regret and Big Boo's kindly, tough-love comfort a unique TV moment between two women who, on the surface, couldn't be more different.

As the season unfolds, patient viewers will be rewarded with a variety of narrative gifts. The prison will be threatened with closure, see bedbugs and book burning. Nicky's relationship to drugs will get the best of her, Big Boo's backstory will finally be revealed, while Piper and Alex go from hate sex to "lesbian bed death." Crazy Eyes will continue to heartbreakingly grapple with the loss of her now-dead mother figure, Vee, and the fate of Diaz's unborn baby will loom heavily, with Pornstache's wealthy and earnest mother (Mary Steenburgen) making an offer of adoption. DJ and model Ruby Rose will join the cast, playing sarcastic and attractive Stella Carlin – destined to become an object of desire for some key inmates. The first few episodes read subtler than previous seasons, and in doing so get us right back to the show's core strengths.

It's absurd that it took a show about prison to get us this much closer to an accurate mainstream depiction of women's inner lives, but OITNB is cultishly popular precisely because of how relatable its smallest moments are to viewers. Although the major dramas are compelling – clandestine contraband runs and brawls, badass betrayals and alliances – they're all secondary to those quieter conversations in prison corners, where characters articulate feelings so rarely showcased on the small screen. Although it's a given that OITNB is in no way an accurate depiction of life behind bars, in terms of getting women right, it comes closer than most. Those who have come to love that authenticity will rejoice at season three – and binge-watch their way through the weekend. 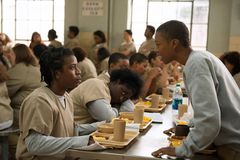 Strong is the new authentic: How Orange is the New Black delivers female characters we can believe in
June 6, 2014 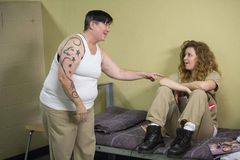 Taylor Schilling on why Orange is the New Black is ‘doing something special’
June 6, 2014 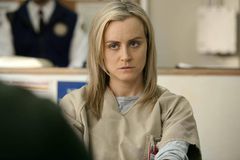 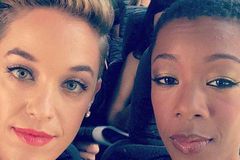