A person (that's me) goes away for a few days. Leaves on St. Patrick's Day. Off the radar, out of touch for a couple of days. Yep, two days. Then back online, briefly. What's happened? Only this: Jim Flaherty is no longer the federal finance minister (or as he was known in my house, "the minister for hardship"); Alison Redford is no longer the premier of Alberta; and a distinguished newsman originally from a place the locals call "Norn Iron" is now in charge of this great newspaper.

You could have knocked me over with a feather boa. I was so shocked I almost took up golf. This is usually what happens when I'm shocked to the core. Back when I heard that the boss of CBC had left to run Twitter Canada I actually acquired a yellow V-neck sweater to play golf. But I didn't go that far on this occasion. I laughed. A mad kind of laugh.

I didn't laugh at all at Friends with Better Lives (CBS, CITY-TV, 9 p.m.), a new sitcom starting tonight and a contrivance so mind-boggling you'd think someone at CTV had cooked it up.

The banality of network sitcoms is revealed anew in this laboured set-up – it's like a Friends knock-off as envisioned by Chuck Lorre (Two and A Half Men, Mike & Molly, Mom).

In fact, back in January the show's creator, Dana Klein, introduced the show to critics with this: "I'm the creator and an executive producer, and I just have to say that I'm so happy to have a show on CBS. I had pitched to them so many times I was starting to think that to get on the air I would have to change my name to Chuck Lorre. Friends with Better Lives takes a really honest look at friendship and how it is impossible not to compare ourselves to our friends, especially now with Facebook, Instagram, Twitter – I mean, I can barely open my computer without feeling like I failed in a million different ways. Someone's got the perfect family, the perfect kids, the perfect job, the perfect body. It's human nature to want what we don't have."

Right-o. What we've got is a bunch of friends who, without plausible explanation, all hang around the same house, all the time. There's married couple Bobby (Kevin Connolly) and Andi (Majandra Delfino), who are envied for their happy marriage but feel unsexy compared with their friends. They have a lodger, Bobby's partner in an ob-gyn practice, Will (James Van Der Beek), who brays that he loves being divorced, single and alone. In a twist of the inevitable sort, it is mentioned that he caught his ex-wife having sex with their couples counsellor.

Then there is their friend, Jules (Brooklyn Decker, the former swimsuit model), who is in lust with a new boyfriend (Rick Donald). And finally there's pal Kate (Zoe Lister-Jones), the alleged epitome of a strong career woman, who moans that she can't find or keep a nice guy.

They all hang out and make jokes loaded with sexual innuendo. We get it, this attempt to catch all demographics – the married, the new couples, the divorced and delusional, and the vaguely bitter single women. You are meant to identity with somebody and chuckle ruefully at their antics and self-hating jokes.

The show offers little in humour but does present an insight into the mercurial methodology of network comedy. (A genre that Canadian commercial broadcasters are trying desperately to emulate.) Most network comedies are failures. The business model is to create about two dozen every year and hope that one or two will stick around. The ones that succeed tend to last for years, hence the ceaseless attempts to forge another Friends or Big Bang Theory. What's needed is a hard-to-create combination of warmth and wit. If the viewing audience feels comfortable, it will just stick around week after week. In this instance, it seems highly unlikely that enough viewers with empathy for the empty characters on Friends with Better Lives even exist.

It gets a boost in its debut, airing immediately after the hour-long series finale of How I Met Your Mother (CBS, 8 p.m.), a show that managed to last nine years on inventiveness layered atop that necessary warmth and wit.

For all that creator Dana Klein talks about, "a really honest look at friendship," one can imagine the mechanics of this show being discussed – "is the small-penis joke too edgy for the CBS audience?" or, "Can we squeeze in another oral-sex joke to satisfy the twentysomething viewers?"

As I was saying to you before I left, much of the satisfying comedy right now is political satire based on news and real events. Nothing gets better laughs than actual, inexplicable events in the real world. Where it's mad. Mad, I tell you. Golf, anyone? 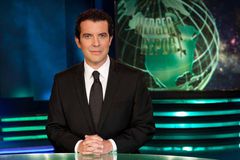 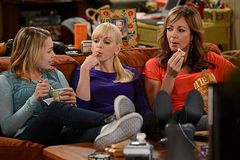 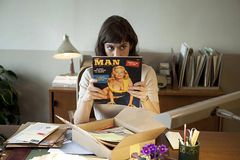