At first it looks like one of those typically cozy, nostalgic British dramas. It's set in a rosy-hued past. It's all fabulous frocks, more servants than you can count, there are hints of class snobbery and, inevitably, some cad is intent on reaching what's under a lady's fabulous frock while a servant waits with stoicism outside.

And then it's about more than that. It's about narcissism and manipulation. It's about hatred and decline. It's about revolution sweeping away all that fabulousness.

Indian Summers (Sunday, 9 p.m., PBS on Masterpiece Theatre) is it, and it's this year's big-budget British blockbuster. Made at enormous expense for Channel 4, there are, reportedly, plans to make it last 50 hours in total. Why so long? Well, it's set in India, it starts in 1932 and the idea is to trace the decline and collapse of British rule, which ended in 1947.

Connoisseurs of British period drama, and they are legion, will draw instant comparisons with the much-loved The Jewel in the Crown, which covers the same period. But while that drama was doom-laden and about a cultural failure, seen mainly from inside the world of the doomed rulers, Indian Summers is more sprawling and prickly. There is little that's noble about the rulers and few figures in it seem likely to transcend crass colonial arrogance.

The setting is the Himalayan hill town of Shimla where those who run India go to escape the heat for several months every year. Julie Walters plays Cynthia, who runs the joint where all the Brits eat, drink, make merry and plot against one another. Cynthia is always plotting, too. She doesn't want this paradise disturbed. She hisses secrets into ears and manipulates men and women into having affairs. Her gimlet eyes look on most Indians with disgust.

Even in the first episode it is clear the locals are less than thrilled by the return to the town of their rulers with all their luggage and lusts. Mahatma Gandhi and his followers have begun their long fight against colonial rule, and resentment is simmering slowly. At first most of the drama, though, is concentrated on introducing the large cast of characters. Be aware that Indian Summers moves along slowly, interrupted by outbreaks of violence big and small.

At the centre of power is Ralph (Henry Lloyd-Hughes), the private secretary to the viceroy. A dashing man of deep and abiding cynicism, he attracts women who are voracious for his attention. At his side is his sister, Alice (Jemima West), a mysterious woman who has just arrived from England and is escaping a ruined marriage. The mystery surrounding Alice is of great curiosity to Sarah (Fiona Glascott), wife to a missionary who loves an Indian woman more than he loves his wife. Representing India, at first, is the idealistic civil servant Aafrin (Nikesh Patel), a young man worried about both his career and his sister, who happens to be part of the Gandhi independence movement.

The series looks stunning, visually, and that is part of its political fabric – it is absurd that this handful of rulers live in extraordinary opulence while around them there is poverty and desperation. Indian Summers is attempting to operate on several levels – it's a soap opera about rich narcissists and a tough political drama about how power shifts when narcissism begets decay. On the evidence of the first few episodes, it all works splendidly.

Blood & Oil (Sunday, ABC, CTV, 9 p.m.) is a hopeless soap, a sort-of Dallas in North Dakota, where the Bakken shale oil deposit created a boom a few years ago. Don Johnson looms as a local tycoon who, for reasons inexplicable in any context except a TV soap, takes under his wing newlyweds Billy and Cody who have just moved to town. Nothing good comes of that.

Quantico (Sunday, ABC, CTV, 10 p.m.) is much more palatable. An enjoyable concoction, it's a terrorist thriller with loads of sizzle. A new class of FBI recruits go through training at the Quantico base to become the next top agents. They bond, they bicker as the course tests them. Flash forward and there's a terrorist attack on the United States, the worst since Sept. 11, 2001. Who is responsible? The finger points to one of the FBI recruits, but which one? That's the central puzzle. Indian actress, singer and former Miss World, one Priyanka Chopra, has the key role at the start. Quantico is formidable high-grade trash. 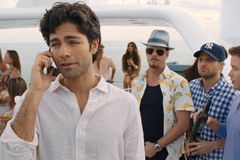 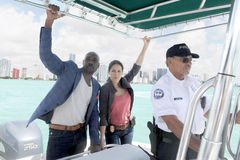