Whenever a new depiction of a female superhero comes around, I'm always warily enthusiastic. We don't get a lot of mainstream screen time devoted to our comic book heroines as it is, and when we do they tend to be shoddily rendered and poorly written (Catwoman, anyone?) It's typical to see a woman who's saving the world as doe-eyed, sexed-up or callous, lacking the basic human complexities of her Spider-Man, Batman or Incredible Hulk colleagues.

Female superheroes are so marginally represented that filmmakers seem more willing to feature a talking raccoon or a (hardly) talking tree than take a gamble on something female-fronted. Even when, say, Marvel endeavors to go female-centric, they're so wary of their fan-boy market that they feel forced to pair her with a man. (See Ant Man and the Wasp, coming in 2018.) It's sad that film and television studios don't trust male viewers enough to tune in when a woman is saving the day – and that they assume women just aren't interested in seeing someone like themselves doing all the saving.

Yet the new CBS television adaptation of DC Comics' Supergirl has been getting a lot of pre-air buzz for the past few months, allowing ample time to create high expectations that the show will deliver on its promise of both an entertaining and empowering female lead. And unlike her myriad male counterparts, so much is riding on the caped Kara Danvers succeeding with viewers that, if she fails, it might be unlikely we'll see another caped woman on television any time soon.

The show's first episode aired Monday night, and right away it appeared Supergirl intends to stay true to its comic origins, all while avoiding the dark drama that characterizes, say, the contemporary Batman franchise. On the surface, the show has a Smallville or Lois & Clark feel – a brightly coloured prime-time soap opera style that favours the light and poppy to any deep explorations on the nature of good and evil. There's nothing wrong with this aesthetic decision, though it is surprising given grit and extreme violence seem to be the marker of success for today's relevant shows. But even though it's got an obvious agreeable sweetness to it, Supergirl is delightfully self-aware that its "girl" is operating in a man's domain. In fact, it's the first time I can recall hearing a comic-book hero utter the word "anti-feminist" on the small screen.

Establishing the show's breakneck plotting, our hero's origin story is summarized within the first three minutes of the show's pilot. Twenty-four years ago, Kara Zor-El's planet Krypton was in peril, so the excruciatingly wholesome alien tween is sent to Earth to watch over her helpless baby cousin. Things go awry in the usual comic book space-time continuum way, and by the time Kara arrives on Earth, said baby cousin is all grown up and a beloved superhero – kind of a let-down for someone who had valiantly planned to prove herself.

Kara's adoptive parents, the Danvers, encourage her to spend her life ignoring the fact that she can fly and stop a bullet, so she makes a dutiful go of living a "normal life." Flash forward a decade or so, and our Supergirl (Glee's Melissa Benoist) is charging down an urban sidewalk as the poorly paid female media intern stereotype. The world already has its (male) hero, so instead she's working hard to get her monster boss Cat (played mercilessly by Calista Flockhart) the perfect latte and a pair of tickets to Wicked.

But when a transatlantic flight threatens to crash over the city (of course) and her sister also happens to be on board (again, of course) Kara has to revisit her long-forgotten powers. After years of not even being able to dress herself for a first date, Kara manages to steer the plane to safety, outing her heroism – but not her identity – in the process. "I didn't travel 2,000 light years just to be an assistant," she tells her concerned sister. Most amazingly, all of this tidy action happens before the opening "S" crest flashes on screen.

There are some fun winks to the show's inherent gender issues, all built in to what is otherwise a familiar depiction of a young woman struggling in the big city. Kara's media mogul boss brands the mysterious saviour as Supergirl, and Kara questions why it shouldn't be Superwoman. She also refuses to wear an objectifying midriff-bearing costume that a male friend suggests, and objects to one villain's implication that a woman should serve a man. (I especially enjoyed the detail that the bad guys call women "females," and that Supergirl ends up vanquishing one with his own weapon.)

This is admittedly the most palatable, spoon-feeding form of feminism there is, much like early seasons of Buffy the Vampire Slayer or the Spice Girls' entire career, and nothing like the female-fronted richness of Orange Is The New Black, Broad City or How to Get Away With Murder. So far, Kara isn't particularly complex beyond being from outer space, but it's nice to see her adorable girl-power in this particular prime time format regardless.

Supergirl is incredibly earnest, but it doesn't really matter. It's the kind of show that provides welcome, light escapism, relying on neatly wrapped-up narratives and endearing, if clichéd, characters. Relative unknown Benoist is impossible not to like with her Clark Kent glasses and bouncing ponytail, even when the role pushes her into a squealing, befuddled girly pigeonhole. In fact, it may be Kara's ability to have a hysterical cry over missing her mom, or gleefully jump around in a pair of sweatpants after saving people's lives, that makes this take on superheroes refreshing.

So far, the show is the wholesome comfort food of the genre, offering an empowerment-lite that, despite its lack of heft, is entirely charming. It doesn't assert an agenda, but stealthily implies it's time for viewers to embrace a "girl" in the role of saviour.

11 Super and Not So Super things about the new Supergirl trailer
May 14, 2015 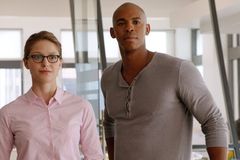