On the telephone from Manhattan Monday afternoon, Eric Fournier sounded much less tired and wired than he could have.

After all, less than 12 hours earlier, he'd been in Indianapolis's Lucas Oil Stadium, helping co-ordinate the jaw-dropping floor visuals, lighting and audience-interactive elements for the halftime show at the 46th annual Super Bowl.

Maybe you saw them? An estimated 111.3 million television viewers apparently did, making Super Bowl XLVI the most-watched program in TV history, along with the close to 70,000 who attended the event. (Canadian viewer numbers aren't yet available.)

Fournier, 48, was in Indiana in his capacity as a partner and executive producer for Moment Factory, the Montreal-based multimedia/new-media company that, since its creation in the fall of 2001, has become the go-to collective if you're keen to combine sound, light, video, architecture and performance into one extravagant sensory overload.

Nine Inch Nails' Trent Reznor wanted just that when he hired Moment in 2009 for his Lights in the Sky live tour. It was Moment that dropped close to 2,000 LED-lit beach balls last spring on the crowd at California's Coachella festival during a performance by Arcade Fire. It was Moment that got the call from Ottawa's National Capital Commission almost three years ago to turn the façade of the Parliament Buildings into a screen for a spectacular light-and-sound show.

Fournier is currently in New York because Moment Factory has been tapped to provide the lights and interactive elements at two consecutive concerts featuring the world's biggest rapper, Jay-Z, in fabled Carnegie Hall. It's a charity show in part to support the United Way of New York and tickets have been priced at $500 to more than $2,000 (U.S.). The first performance was Monday evening.

Doing large events, "often stressful ones," is "in the DNA of Moment Factory," Fournier says. "So I think we've got a pretty sharp team when it comes to addressing those tight challenges." But "yesterday, entering [Lucas] stadium, looking at the crowd ... seeing NBC broadcasting live and all the anxiety surrounding the game itself, I couldn't help myself being as nervous as everybody else," he laughed.

The Super Bowl gig was done in association with another Montreal creative powerhouse, Cirque du Soleil, with whom Moment Factory has teamed on various projects since 2004, including the reconstituted Celine Dion show at Caesar's Palace in Las Vegas. Madonna's veteran choreographer and creative director Jamie King had worked with Cirque on its Michael Jackson: The Immortal World Tour show.

When Madonna got the nod to anchor the Super Bowl halftime show, King turned to Cirque to help with its preparation and presentation. Cirque, in turn, contacted Moment in late October last year and "by late November we had the go," Fournier says.

Moment has a total staff of more than 60; for the Super Bowl, Fournier and his partners Sakchin Bessette and Dominic Audet assembled a team of 12 "artist technologists" who got involved "very early in the process and drove it all the way to the finish line."

In fact, such is the precision of digital technology and 3-D mapping today that Fournier thinks Moment Factory never even physically had to visit Lucas Stadium in advance. "In many instances, we work just from plans and when we finally arrive on-site, everything's prepared in advance. What matters is the quality of the information."

For some, a Super Bowl berth would rank as a career high. Not Moment Factory. "The whole world of multimedia environments and working with new technologies is just at its beginning," Fournier says. "We've seen the technologies evolve so fast in the last 10 years that the possibilities are endless.... It's about pushing boundaries, using all the new tools, the technologies people are used to, like video games and the Internet, and trying, in a certain sense, to transform the public environment into a more beautiful world."

Indeed, as much as Moment Factory loves to manufacture spectacular one-off events, it's also keen to do more permanent installations. Which is why it recently signed a contract to provide all the indoor multimedia elements for the Euronews building currently under construction in Lyons, France.

Fournier is clear about the fact that Moment Factory's rise has paralleled the decline in sales of recorded music, particularly in North America. In 1999, music sales and licensing on the continent totalled more than $15-billion (U.S.); 10 years later, that total was about $7-billion, with CD sales dropping 6 to 8 per cent every year.

In fact, this year, revenue from legal digital downloads is expected to surpass that from CDs for the first time. As a result, to maintain revenue, artists have turned to mounting ever-more spectacular live shows, Sunday's Super Bowl perhaps being the apotheosis. Events, in other words, not simply concerts.

"That trend, it's a major, major one, and it certainly has helped us develop our craft," Fournier acknowledged. "With Nine Inch Nails, developing this interactive stage was a pretty important milestone for us. And then the launch of the balloons with Arcade Fire, the people participate, y'know? In our world, the way we see the evolution, shows will become participative. It's not going to be me looking at somebody any more."

Madonna to perform in 5 Canadian cities this summer
May 3, 2018 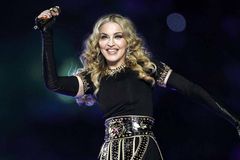 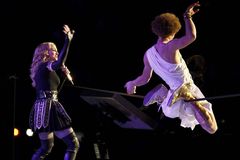 M.I.A.'s middle finger and the other memorable Super Bowl moments
May 11, 2018 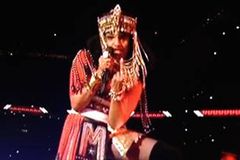