One week into January and the important new series are now rolling out. There are two major debuts this weekend. One is a finely detailed, dramatic documentation of life in Chicago's South Side and it aims for sharp sociological insight. The other is meant to be a mind-bender anthology of Phillip K. Dick's short stories.

The Chi (Sunday, The Movie Network, 10 p.m.) is the work of Emmy-winner Lena Waithe, who wrote some of the strongest episodes of Netflix's Master of None. It's a panoramic drama that takes a while to focus on its key characters. It's meant to sprawl, like David Simon's The Wire, in a novelistic approach to a place and its people. But it's more like Simon's portrait of New Orleans in Treme – it's more about the rhythms of life and has a deeply humane perspective.

Made for premium-cable Showtime, the series is really about two murders in the crime-ridden locale and how those murders reverberate. There is no single protagonist on which to hang the story. It opens with the focus on Coogie (Jahking Guillory), a handsome kid with fabulous hair and a cynical attitude who roams the neighbourhood on a bike. What we see on Coogie's journeys is wreckage. The streets are dangerous, especially those with murals celebrating Barack Obama. Rap music pounds into Coogie's head through his headphones and, at first, it seems the viewer is meeting a tough kid with a heart of gold.

Coogie goes out of his way to feed a hungry dog and then finds a dead body. He eyes the territory around him and makes a fatal mistake – he steals the chain from around the neck of the shooting victim and the sneakers from the guy's feet. It is made clear that, in this community, you can always get a few bucks for cool, used sneakers. What Coogie does actually sets up a series of events that say more about the situation of the black community on Chicago's South Side than any news report.

What it says is that the community, disconnected from authority, order and rule of law, relies on a culture of retribution that causes the bodies to pile up. Looked at from a distance, those statistics about shootings and homicides in Chicago seem bizarre. Seen from within, they make a perverse kind of sense.

As Coogie's actions reverberate, another, even younger kid comes into focus. That's Kevin (Alex Hibbert), who has two things going on in his young life. He's wondering if he should tell someone about one particular indent he's seen on the dangerous streets or if he should concentrate on learning the words to a song from The Wiz for the school play, something he only volunteered to do in order to impress a girl. This kid, just figuring out how to deal with girls, is carrying a terrible moral dilemma.

Meanwhile there is another central character, Brandon (Jason Mitchell), whose way out of the neighbourhood and a life of crime and drugs is through cooking. He's a popular, stable young man striving to succeed and eventually open his own restaurant with his girlfriend. A possible promotion to line cook at the upscale restaurant where he's employed is put in jeopardy when the violence of the streets invades his personal world. How can a young man work in a high-pressure kitchen when all around him there is only murder and revenge?

None of this is offered with melodrama added to the mix. Waithe's storytelling tactic is to observe this world carefully and to discern and communicate the truth, unpopular as it may be. There is no implied criticism in the series; it's up to the viewer to discern what devastating evaluations are being presented.

On the evidence of the first two hours, The Chi is a major TV drama, a many-layered account of the men and women living in a place U.S. President Donald Trump has often singled out to decry the high crime rate, and something he's described as "carnage."

Philip K. Dick's Electric Dreams (Sunday, Space, 9 p.m.) is a new anthology series based on Dick's speculative short stories about technology and the future. Some seem dated now while others retain their power. The series kicks off, oddly, with one of the weaker dramas.

In Real Life, Anna Paquin plays Sarah, a cop traumatized by the massacre of 15 of her colleagues. She's offered a virtual-reality trip to take her mind off things. Her wife, Kate (Rachelle Lefevre, also starring in Mary Kills People right now) says the VR thing is like a vacation. Strange things happen, of course, and the past becomes blended with the present and the future.

Sarah becomes enmeshed with the tech mogul George Miller (Terrence Howard from Empire), who developed the VR system. What seems real also might be a kind of video game and Sarah's secret desire seems to lead to self-punishment and guilt. It's all very sleekly made – in Toronto, it looks like – but it's one muddy, confused sci-fi outing.

A much stronger episode, later in the series, is The Commuter. In it, Ed Jacobson (Timothy Spall) toils grimly in the English railway system. He's got a tough home life with a violent teenage son. When he sets out to find a place that a mysterious rail passenger talks about, he discovers an alternative to his own life. That episode has a strong moral core and questions human foibles, without any layering of sci-fi silliness.

The anthology is alluring, given the source material, but very uneven. 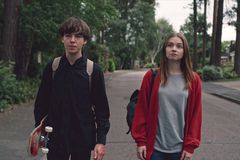 Season 2 of Cardinal is solid, but lacks searing sensibility
January 2, 2018 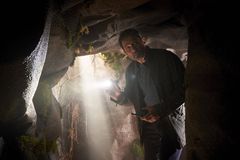 Ten TV shows to consume in binges or bites over the holidays
December 22, 2017 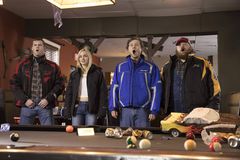