On a recent press day in Toronto, English actors Jared Harris and Vanessa Kirby are gamely posing for photos before an interview. Kirby pops bunny ears behind Harris, who goads her on, showing the same playful and easy chemistry the pair share as father and daughter on screen in The Crown. Netflix's new series, which starts streaming this weekend, explores the impact that the British monarchy has on the lives of those close to the throne, with the first season set in the 1950s, focusing on Princess Elizabeth's accession and early reign. (Later seasons will trace the life of Elizabeth II straight to the present day.)

In the premiere season, King George VI (Harris) is portrayed as being close to both dutiful Elizabeth (Claire Foy) and her impetuous younger sister Margaret (played with great verve and pathos by Kirby) – but the latter was by many accounts the favourite. "He marvelled at the side of her personality that he didn't have, which was that gregarious exhibitionist," says Harris, a prolific character actor perhaps best known as Lane Pryce on Mad Men. "It filled him with terror to have to go up and stand in front of people. He was more comfortable in private, with his wife and children."

George's family was a surprisingly warm and close-knit clan, one that referred to themselves as "us four." This was an explicit choice the King made in contrast to the Victorian upbringing under his own father George V, where, Harris says, "children were seen and not heard. There was never any demonstration of affection or love."

While the series dives into many speculations about what was said and done behind closed palace doors, those moments are certainly not as provocative as the frankly ribald conversations between newlyweds Elizabeth and Philip (played by former Doctor Who star Matt Smith). "That was the thing: There's a lot of evidence out there in terms of how they want to be perceived publicly. But what's interesting, and certainly what [executive producer Stephen Daldry] and [creator Peter Morgan] were after, is what was the private side like," Harris says. "That part you do have to invent, but you want to invent it with intuition and insight, and on that level attempt to be as accurate as possible given that there's not that much out there."

What is out there is a wealth of unofficial biography, gossip and hearsay. Kirby admits she had to make an effort to put her character's latter-day reputation as a party girl out of her head to properly capture not the tabloid version of Margaret of more recent memory (the Princess died in 2002) but her early sparkle and "this fragile little girl who hasn't grown up and is actually lost." For this, Christopher Warwick's biography Princess Margaret: A Life of Contrasts was especially useful. "On one side I read lots of scholarly accounts and factual, historical accounts, and also some more sort of sensationalist, raunchy ones and that was in the middle encapsulating both," Kirby says. "She had the ability to be amazingly fun – the life and soul of a room – or an ice queen, utterly royal and fiercely proud and a nationalist.

"Weirdly, what struck me from watching the whole season," Kirby continues, "was I didn't really fully realize how unstable she is."

Additional intel for the series came not from the untraceable back channels of the Royal Household that feed both the Daily Mail and Majesty, but by chance, when a random seating arrangement at dinner opened up a whole new understanding for Kirby.

"I sat next to a member – I don't want to name the name, but a sort of cousin of the Royal Family, and his parents had got married in the 1970s; one of them was divorced but they were still allowed to marry," she says. "And he said Margaret had been very unhappy about the fact that they were allowed to marry. That's 20 years later and the fact is she's still got a resentment, not happy that times have changed for the better but bitter that people would be allowed to do what she wasn't."

For Kirby, the event that shattered her character's life is her father's death. "Not only because her sister was becoming Queen, but I think it was the loss of him, the deep loss, the unresolved grief," she says. "Her sister has Philip and two children and the weight of the crown now on her, her mother was in mourning and Margaret was kind of left to her own devices."

Harris nods in agreement, adding, "His absence is felt through the whole series."

To prepare for the King's final months, Harris studied sound archives and familiarized himself with the particulars of the man's famous stammer, listening and relistening to the recording of his last Christmas address. "It's after he's had the lung removed and he's not well – you can hear the rattle and the rasp in his voice," Harris says.

Otherwise, his most helpful biographical material was not about the King at all, but The Little Princesses, a book published by the sisters' trusted long-time governess, Marion Crawford. "All the other ones are talking about the royal engagements and fact of events … you have to infer what the emotional impact would be from those and understand it all intellectually," Harris says.

"But [Crawford's] book was her perspective on who he was with them, and you get an insight into who they were as people."

Dubbed a scandalous memoir at the time, Crawford's 1950 book details how the King often joined the children in the garden to play hide-and-seek. It's a quaintly affectionate tell-all even by today's standards, but like the many other intimate moments in The Crown, it reveals the small-scale details that go on to humanize one of the world's most famously privileged families. 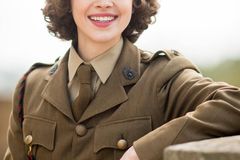