If you weren't there, it's hard to explain – the all-consuming feeling of sitting by the radio, hour after hour, as the music of the 1960s poured in. Those staticky songs were like messages from a bigger life than the one you were living. Something was happening out there, to everyone at the exact same time, and you were part of it just by listening to it. It was the Bernoulli principle applied to art: Because all music flowed through a single channel, the AM band, that constraint accelerated the force and vibrancy of it. Every week saw the arrival of another immortal song.

That's the feeling that David Chase – the writer/director who created an immortal television hit of his own, The Sopranos – wanted to evoke with his feature-film directorial debut, Not Fade Away, which opened across Canada last week. Set to the soundtrack of the 1960s, it's the story of Douglas (John Magaro), a New Jersey high-schooler who first alienates and then frees himself from his narrow-minded parents (Molly Price and James Gandolfini, reunited with Chase after his phenomenal success as Tony Soprano) by forming a band, growing his hair and eventually moving across the continent to Los Angeles. It's a story Chase, now 67, knows well, because he lived it.

In his New Jersey bedrooms (first in Clifton, then in North Caldwell), Chase – he was born David DeCesare – would listen to those songs, stare at those album covers, dream those dreams. In high school, he and some friends formed a band. He started out playing drums, but his parents sold his kit. He played on cardboard boxes for a while, then switched to the bass. "The [strained] relationship between Douglas and his father is autobiographical," Chase said during an interview in Toronto last month. He was wearing a nice jacket, his thin grey hair framed his slightly fox-like features and his voice (when he used it) was low and gruff. "Some of the stuff with the band, the [competitive] feelings engendered there, are autobiographical."

His band lasted three years before "fizzling out," Chase says. "And I was a crappy bass player." He attended the Tisch School of the Arts at New York University, then moved to L.A., where he went to Stanford University's film school. "I realized that I could make a film for $1,000, but you can't do anything with that," he says. "But if I could write a feature screenplay, I might actually sell that, and it would be like having a piece of property."

He changed his name, landed a job writing for the TV series Kolchak: The Night Stalker, then moved onto The Rockford Files (where he won the first of his seven Emmy Awards in 1978) and Northern Exposure before creating The Sopranos in 1999, the show that revolutionized cable and the way we watch television. He married his high-school girlfriend, Denise Kelly, and they had one child, Michele DeCesare, now 31, who played Meadow's friend Hunter on The Sopranos.

"As a kid, I was always full of yearning," Chase says. "I was shy, and pretty fearful of things. Then as an adolescent, in order to learn not to be fearful, I became very rebellious and risk-taking. I put myself in positions that were not good – dangerous positions – as an attempt to get out of my shy self."

But while it lasted, his band was "such fun," Chase continues. "It was so great being part of this thing where you all spoke the same language. You liked the same things, and you could talk about them forever. Mostly you could just sit there and listen to that music, over and over again, and notice things about it, and point out little features of it. It was like an avocation, like it was work, but it was really great."

That burst of information occurred near the end of our 15-minute interview, and it was the most animated I'd see Chase. When I arrived, he was lying on a sofa with his eyes closed, miserable with a head cold. "Taciturn" would be a generous word for his conversation style, but I don't think it was some kind of dickish power trip; I think he is a genuinely reticent talker who saves it for the page. The first sound captured on my tape recorder is him yawning, and the bulk of our meeting consists of me positing ideas, and him agreeing or disagreeing with them.

Both his parents are dead, and he "absolutely" does not mind everyone knowing he had a difficult relationship with them that was never really reconciled.

"My father got sick like Gandolfini's character [in Not Fade Away]," Chase says. "He was in the hospital in New York, and I went home to see him. By that time he was proudly telling all his nurses that his son, the producer of The Rockford Files, was coming. But in my presence he didn't do that. He couldn't give me that."

Chase's mother was worse. "My father understood me a little bit," he says. "I think he got a little bit of the idea of wanting to make a statement, or be in show business, do something creative. My mother never got it, at all. She just bitched about it all the time."

If Chase wanted revenge, he got it creatively: Both Tony's mother in The Sopranos and Douglas's mother in Not Fade Away are terrifying creations: cold, complaining, unsatisfiable. "Selfish," Chase says. "Selfish women."

"Who don't want anyone else to be happy either. Who create an aura of misery," I add.

His defence was "to stay out of the house as much as I could, be out late at night, and not listen to her. Over time I lost respect for her." It was also an impetus for his leaving home, and immersing himself in work.

His monster success with The Sopranos let him make Not Fade Away the way he wanted, with a largely unknown cast and an unconventional, meandering structure. But in Hollywood, how long does the good will from a hit last? "I'm about to find out," Chase replies dryly. "I'll let you know. I always thought that was part of the job, to make your movie different from every other movie. But apparently it isn't. It seems what's wanted is a very narrow band." Still, Chase plans to stick to features or telefilms: "I would never do a weekly series again. I did it for so long. I've done it. If that's all there was, I would retire."

Not Fade Away ends as Chase's real life began: Douglas is in L.A., "a place that's so different from where he's from, and he really doesn't have anything," Chase says. "But he's got himself, and he's got music." For Douglas's doppelganger, that was more than enough.

Film Review
Not Fade Away: Coming of age with a drum kit
December 28, 2012 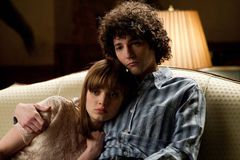