He was only a guest on the show he's going to take over, but Stephen Colbert proved he has the right stuff to helm a late-night talk show.

And he didn't slip into his Colbert Report persona even once.

The sharp Comedy Central fixture was briskly on point during his visit to The Late Show with David Letterman on Tuesday night.

Although Colbert has guested on The Late Show on several previous occasions, there was decidedly more import to this appearance.

This was the first official meeting between the two men since CBS tapped the 49-year-old comedian to succeed Letterman on their late-night franchise when he retires next year. Even those people who don't regularly watch The Late Show would be watching.

In the end, there was no wistful showbiz anecdotes or passing of torches. It was simply two comedians sitting around trading setups and punchlines.

Sporting what appeared to be a new pair of glasses for the occasion, Colbert bounded out to thunderous applause (bandleader Paul Shaffer played the country-blues standard Walk Right In for the occasion) and took his place on the big grey couch.

"You look right at home," said Letterman to his heir apparent to the late-night throne.

"I'm going to do whatever you have done," Colbert graciously told Letterman.

"Really, no?" queried Colbert. "It seems to have gone pretty well, Dave."

Obviously at ease in each other's presence, the two men got immediately to the matter at hand: "Obviously, I'm thrilled and honoured to be taking over for you," said Colbert.

"Well, I'm thrilled as well," said Letterman. "In a situation like this – Paul and I have been doing this for a long, long time – they could have just as easily hired another boob like me, but they didn't. They hire a guy…"

Enter Colbert with bang-on timing: "They hired a boob like me!"

In response to Letterman's mild protestations, Colbert explained, "Every boob is like a snowflake, Dave. We're all unique in our own way."

Which in itself seemed to be the modus operandi for Colbert during his Late Show appearance.

Unlike the character he plays on Comedy Central's The Colbert Report – a vainglorious, delusional parody of a Fox News personality – last night he was simply Stephen Colbert: A well-educated guy from Washington with more than two decades making the comedy rounds on cable TV favorites like Exit 57 and Strangers with Candy.

Fittingly, Letterman asked Colbert to recall the time when he almost became an intern on Late Night with David Letterman in the eighties.

Colbert revealed that in 1986, he went to the Late Night offices with a former girlfriend who had applied for an internship. While waiting in the hall, a member of the writing staff invited him in for a chat.

"We had a 15-minute conversation," said Colbert. "I got the internship, she did not."

As it turned out, Colbert turned down the opportunity to work as an intern on Late Night. "Why not?" asked Letterman.

"Because you do not pay people," said Colbert with bang-on timing. "It's an expensive city."

In the second segment, Letterman shifted gears by asking Colbert about his family life and being the father of three children.

"They're getting ready for me to be hanging around too much," said Colbert. "I've got my show for the rest of the year.. When are you leaving? I don't know. I should have asked…"

Letterman also asked Colbert whether he was able to actually relax when he goes on vacation with his family.

"I do not know why you do comedy, but it is not because everything is right up here for me," said Colbert, tapping his temple for emphasis. "It's not a normal thing to do with your life. It's more dangerous than bungee-jumping, deciding to do this for a living."

Added Colbert: "I don't have the constitution for hardcore alcoholism, so I have to tell jokes all the time or I go a little insane."

To his credit, Letterman let the new guy run with the ball throughout most of the appearance and seemed content in setting up Colbert for zingers. But when Dave saw an opening, he took it.

Letterman also asked Colbert about the time he broke his wrist while hosting The Colbert Report a few years ago.

"I was running around, getting people jacked up.."

Interrupted Dave: "We don't do that here."

Touchingly, Letterman asked his heir apparent whether he brought his phone with him and the two men smiled broadly for a "selfie" (which Colbert posted to Twitter immediately following his appearance).

And the segment closed with another type of snapshot from the past.

Colbert recalled another period of his career in 1997 – "I was unemployed at a professional level" – when he and his writing partner Paul Dinello submitted a comedy sampling to The Late Show.

Among the writing sample was a rejected Top 10 List, and since it was late in the year, the subject was Top 10 Cocktails for Santa, which Letterman graciously allowed Colbert to finally reveal to viewers.

Included on the list: The Rusty Blitzen, Mama Says Nog You Out, King of the Juice, No Room at the Gin and the Scrooge Driver – consisting of "grain alcohol and regret."

To which Letterman responded, "Here he is, it's the new kid. Good luck to you and your family. Good luck with the show."

If Colbert proves to be half as good a talk-show host as he was a guest, he's off to an strong start. 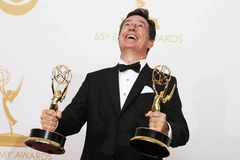 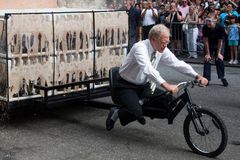