On the set of the made-in-B.C. series Sanctuary, the cast is doing something out of character. Prop guns and lab equipment set aside – at least temporarily – they're trying out a new weapon in their fight: music. In a radical departure for the series, song meets science fiction in a musical episode that airs Friday.

"It wasn't like we wrote an episode as an excuse to do music," said series creator Damian Kindler on the Burnaby, B.C., set during a break in shooting a key scene earlier this year. "We wrote an episode that if you pulled the music out, it would still be a good episode."

Now in its fourth season, Sanctuary chronicles the efforts of Dr. Helen Magnus (Amanda Tapping), her right-hand man Will Zimmerman (Robin Dunne) and others to protect non-human intelligent creatures, so-called Abnormals (think monsters), study them, and, when necessary, contain them. Airing in 170 countries (Space in Canada and Syfy in the United States), Sanctuary has a devoted fan base that Kindler believed, from the beginning, would respond positively to his out-there idea.

"I felt this was a good Sanctuary story and there were many really strong character moments," he said. "In fact, it's a very heartfelt episode and the music only augments that. It's just meant to literally kind of put these emotional moments on steroids. It's not meant to go 'check this out: We can sing and dance.' It's the anti- Glee."

Indeed the episode was informed not by a Glee-type high-school lightness, but by the darker, big-screen inspirations of The King's Speech and The Exorcist.

"It's like a scary Exorcist dark rock opera," said Kindler, a self-confessed "failed wannabe musician" who played in a funk band back in high school in Toronto.

The episode, called Fugue, is indeed dark. FBI agent Abby (Pascale Hutton, who has training in opera and musical theatre) has been working with Will on an investigation when she becomes the human host for a demonic being. Possessed (there's the Exorcist part), she communicates through music: singing her words and only able to understand others when they sing. Will, who has fallen for Abby, is desperate to save her from the monster overtaking her.

"I was determined to write a really good Sanctuary story and music wasn't incidental, but supported it," Kindler said. "The music had to have some kind of organic reason to be there, as opposed to just a gimmick."

If Glee (or Grey's Anatomy, Scrubs or Buffy the Vampire Slayer – all of which have aired musical episodes) wasn't on Kindler's mind as he wrote the episode, a major inspiration was the scene in The King's Speech where speech therapist Lionel Logue (Geoffrey Rush) notes that when Bertie (Colin Firth), the future King of Great Britain, sings, he doesn't stammer. Bertie responds – stutter-free – with words sung to the melody of Camptown Races.

"I thought, 'That's amazing: That when you sing, something unlocks in the brain,'" said Kindler.

Like many of the cast and crew, Kindler is a Stargate alumnus who created Sanctuary first as a series of webisodes. An executive producer and writer, he directs this episode, which also marks a career first for him: He wrote the songs, along with show composer Andrew Lockington.

Together, they worked fast – writing songs over a long weekend in Toronto, where Lockington is based. Back in British Columbia, Kindler laid down the tracks in a temporary studio he built in his West Vancouver home. "I wanted the actors to be very relaxed," he says. "I didn't want them going into a billion-dollar studio."

Two weeks later, the cast were lip-synching to their recorded tracks on-set. And everyone, it seems, was singing along.

"What's really cool," said Tapping, "is you see suddenly a grip walk past with a stand or something and they're all singing: 'Well I'm coming up behind you; I have a grip stand'" she sings.

Tapping, who is also an executive producer on the series, is probably best known for her role as Samantha Carter on the Stargate franchise. Born in England, she grew up in Toronto and it was there that she had her tiny bit of musical-theatre experience: playing Oliver in Grade 6 at her Toronto school "because I had an English accent and no boobs," she said with a laugh.

"So when Damian said we were going to do a musical, I panicked."

Tapping talks about this from the makeup chair, explaining how nerve-wracking the first rehearsal was, especially given her lack of formal musical training. But as rehearsals, recording and shooting continued, she was able to relax. Somewhat.

"There is a mix of excitement and trepidation in equal measure," she said, after working through a complicated scene where she liaises with her counterparts all over the world. "Every day is humbling."

Vancouver blues icon Jim Byrnes guest stars as Magnus's father. When he appears in the library and sings an old lullaby to his daughter (a soulful version of Byrnes's Of Whom Shall I Be Afraid that had Tapping tearing up on-set), she figures out a solution to Abby's problem.

"That addresses the theme of the deepness of memory and of that part of your brain that music and a certain sound touches," said Byrnes, after wrapping the scene. "And the thing that it brings back, the memories it evokes, and the way it makes you do work, makes you want to do better."

Kindler is aware that doing a musical episode may elicit some jump-the-shark commentary (he even shot some behind-the-scenes video footage during the home-studio recording session involving his shark oven mitt), and he has made jokes about his future career at Starbucks, but it's clear he and his colleagues really believe in Fugue.

"I don't think this is a one-off for us somehow," said Tapping. "I think we might have to do something like this again. Find another musical creature to subdue."

Hollywood North wraps in Vancouver
May 13, 2011 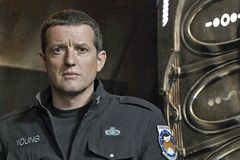