'This is America and we don't let frequent heartburn come between us and the things we love."

That's Larry the Cable Guy promoting the stomach remedy Prilosec, over and over, on the all news channels on the weekend. Sure thing, fella. It's Sunday evening, and his admonition on America and heartburn is interrupting politicians and pundits across the dial. But he fits right in. This. Has. To. Stop.

Sunday night, Sarah Palin on Fox News jaws on about "the corrupt, lamestream, mainstream media" and all the stories and issues she says the corrupt media has declined to cover – Benghazi, foreign money going to Barack Obama. Same night, on MSNBC, Rachel Maddow is in finger-wagging and lengthy high dudgeon about long lineups for early voting in Florida – as if those were the strange cultural practices of foreigners. I'm thinking: It's your country, lady, so fix it.

On Fox, voter fraud is an issue. On MSNBC, voter suppression is an issue. On CNN, Wolf Blitzer, looking so fatigued, presents his panel of peppy pundits all trying to stay even-handed. Iowa, Wisconsin and Ohio. The Romney offices are buzzing. The Obama people are confident. We haven't heard from the evangelicals yet. On BBC World, some twerp is saying that victims of Hurricane Sandy in New Jersey are "de-housing." Gag me with a spoon, as they say in Valleyspeak.

Back on Fox News, Karl Rove is sounding rueful. Which tells me, maybe the jig is up for Mitt Romney. Rove, dough-faced and placid, but George W. Bush's brain, they say: I met him once in Los Angeles, near where they talk in Valleyspeak. He was a man momentarily out of his element, engaging an audience about TV punditry, then impatient with TV critics asking him about truth in reporting. Across the room, the head of the main Fox Network, home to American Idol, American Dad, The Simpsons and Hell's Kitchen, eyed him sideways with amusement, smiling. The business of America is show business, the smile said.

On BBC World, there's some silliness about soccer moms in Ohio. A heavyset woman, wet in the rain, watching her daughter chase a ball in this, the most simple, most un-American of games: She's voting for Romney.

There is no coverage that is unfettered by malice, glee, misrepresentation or cliché. This must stop. Please, make it stop.

That coverage, with punditry replacing reporting and then posturing replacing punditry, is the playground of The Daily Show with Jon Stewart and The Colbert Report. Your most vital information for Tuesday night might be this – live coverage from The Daily Show's Election Night 2012: This Ends Now (Comedy, 11 p.m.) and then The Colbert Report's Election 2012: A Nation Votes, Ohio Decides; The Re-Presidenting of America: Who Will Replace Obama? '012! (Comedy, 11:30 p.m.).

America Votes: A CBC News U.S. Election Special (CBC NN 8 p.m.) is hosted by Pastor Mansbridge, with results, guests and the usual suspects – Washington correspondent Keith Boag, Neil Macdonald from Obama headquarters in Chicago and Susan Bonner from Romney headquarters in Boston. You too can "join the conversation" with "featured comments onscreen." Somebody will comment, "make it stop." Betcha.

On CTV's News Channel, coverage has the mundane title Road To The White House: America Decides (8 p.m.). Hosted by Seamus O'Regan, it has Marcia MacMillan reporting and somebody else has the thankless task of covering social media.

But most of you will want the U.S. coverage, where the showbiz and the sass reside, the ridiculousness and the ruminations that matter. (By the way, CBC is airing The Big Decision at 9 p.m. It's not about the U.S. Election. Dragons' Den dude Jim Treliving pays a visit to a piglet-birthing farm. Make up your own jokes.) It could be a long night and it could be déjà vu – in 2008, Fox News projected an Obama victory in Ohio at 9:18 p.m., with CNN following 16 minutes later.

Scott Pelley anchors for CBS with "easy-to-understand integrated graphics and virtual storytelling tools" and Bob Schieffer. PBS coverage will be anchored by Gwen Ifill and Judy Woodruff, with commentary by Mark Shields and David Brooks.

Fox Broadcasting coverage will be anchored by Shepard Smith, with commentary and analysis by Ed Rollins and Mary Anne Marsh. This might be preferable to the Fox News Channel, with the bombast of Bret Baier, and Megyn Kelly smirking. There, Greta Van Susteren will interview Palin, that gruesome ghost of elections past.

All that "augmented reality" is an issue. CNN goes bonkers for it, with holograms and thingamajigs more bewildering than illuminating. In 2008, Fox News was actually the more sober-sides broadcaster on election night.

Like the man said, "This is America and we don't let frequent heartburn come between us and the things we love." Heartbreak and heartburn tonight, all the way. Then it stops. Please. Pass the Prilosec. 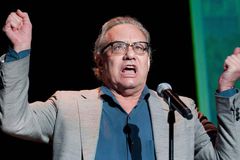 Showbiz is politics and politics is showbiz
September 6, 2012 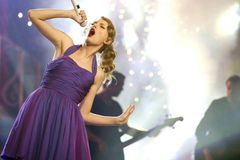