The reason is clear enough – it's live TV and no viewer can fast-forward through the commercials. The ads are seen and, presumably, have impact.

Going down the list of most-expensive buys, after NFL football is The Walking Dead (Sundays, AMC, 9 p.m.). It tops the list of all non-sports shows. Airing on basic cable, the show remains a ratings juggernaut, a must-see and such a must-see that few people record it to watch later. They watch it live and see the ads.

That may change. The Walking Dead is a series in serious decline. The plot grows flabbier, the speeches go on longer, the zombies less dangerous and the action, such as it is now, involves inordinate amounts of gunfire and dubious amounts of pointless excursions away from the main plot.

Viewers can find all kinds of possible meaning in The Walking Dead. You can find treatises about the series in Psychology Today magazine, for heaven's sake. But the core of the show, and the comics on which it is based, is anchored in the concept of survival in very dangerous postapocalypse world. Brooding Georgia police deputy Rick Grimes (Andrew Lincoln) and a ragtag group struggling endlessly for survival and searching for a safe place represent the viewer's worst nightmare – that civilization is fragile and, if the flimsy infrastructure of society evaporated, the worst impulses of people will emerge as the dominant ethos. Every attempt by Rick and his group to establish a stable, nurturing community has ended in disaster.

There are political parables to be found in it, too. When society collapses and there is rampant fear because there is danger everywhere, fascism emerges as the instant solution. A strong charismatic, ruthless leader always triumphs.

This brings us to Negan, the pompous, bat-wielding villain who has dominated this and the previous, seventh season. That's where the rot set in. His arrival brought about the most chilling and talked-about episode in years – the characters Glenn and Abraham were viciously beaten to death. An essential part of the show's appeal has always been the high-octane sense of imminent danger – familiar, beloved characters would be killed off blithely and after the viewer gasped, the tension escalated again.

What followed Negan's blood-spattered entry into the series was, well, dullness. Jeffrey Dean Morgan inhabits Negan with enormous, lip-smacking relish, but the character is intoxicated by his own verbosity. His speeches and leering condescension are not a substitute for the tension that came with flesh-eating zombies ceaselessly emerging to threaten characters, minute by minute, episode after episode.

Right now, Rick and his followers, along with an alliance of other survivor groups, are laying siege to Negan and the compound where his group, the Saviors, hang out. That's the focus – a long, elaborately staged siege. The supposedly rousing speech from Rick that preceded this sounded like a Hallmark card. Then the shooting started. And it will probably go on until Christmas. It turns out these people are suddenly not very good with guns. The number of times that Negan could have been eliminated, but wasn't, are now beyond counting. That King Ezekiel guy is still standing and still making pronouncements about the power of positive thought, while other characters look at him awkwardly.

It doesn't make any sense, the drawn-out plotting. And the thing about The Walking Dead is that for about five seasons it made perfect sense – in this world, danger is everywhere and always present. Sentimentality is non-existent, as it must be when sudden death stalks everyone. It made sense that betrayal lurked but was answered by swift and terrible violence. It made sense that the meek became vicious in order to stay alive. With so much death and, at times, butchery, the show stayed electrically alive, incorrigibly cynical, tense and anchored in deep-seated fear.

As Season 8 now unfolds, the series seems to have abandoned its core philosophy and caved in to the chaos of endless war, endlessly filling time with gunfire and prattle.

The days of The Walking Dead throbbing with tension are over. Pity. The most-expensive non-sports ad-buy on U.S. TV is in decline and come Season 9, that ad price will surely decline, too.

The Girlfriend Experience’s second season is a chilling masterpiece on sex and power
November 3, 2017 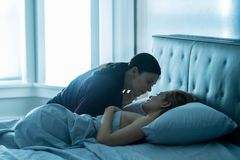 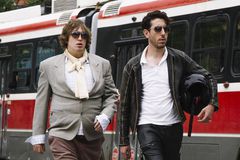 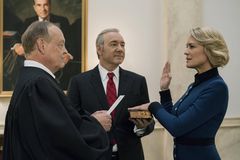