I recently visited an out-of-town friend who was stuck at home with a broken leg and a fully functional TV. On the first night of my stay we watched Doc Martin, a 2001 prequel to the popular British series about a fancy London doctor who retreats to a village in Cornwall. The second night Netflix suggested we might like The African Doctor, a recent French hit about a family from Zaire who immigrate to a small town in northern France. We were about 15 minutes into that movie, in which the charming African physician wins over the racist French villagers, when I belatedly twigged: It featured the identical scenario as Doc Martin.

Fancy a heartwarming foreign flick about a duck out of water? Netflix has your number.

Marvelling at both the precision and the literal-mindedness of the Netflix algorithm, I got to wondering: Why didn't it recommend La grande séduction, the 2003 Quebec hit about a depressed fishing village trying to hang on to a Montreal doctor caught in the local speed trap. Or The Grand Seduction, a 2013 English-Canadian remake that moved the action to Newfoundland?

The short answer is that neither title seems to be included in the Netflix catalogue. But the big question is whether there's any reason Ottawa could not request or require that Netflix include Canadian suggestions for Canadian subscribers – in the same way that Ottawa requires traditional broadcasters to devote a certain part of the programming day to Canadian shows.

And the answer to that question is that it would probably require some new laws. Ever since the Canadian Radio-television and Telecommunications Commission first decided to exempt "new media" from regulation back in 1999, federal jurisdiction over content delivered via the Internet has proved mainly theoretical. If Ottawa wanted to intervene to make Canadian programming more discoverable online, it would certainly help if the government asserted its role by updating the Broadcasting Act, last revised in 1991. And if the government wanted Internet service providers, who don't compensate the content creators who help build their profits, to contribute to the system, it would definitely need a whole new law – because in 2012 the Supreme Court ruled that ISPs are not broadcasters.

You can expect such issues to become hotly debated in coming months since last week's federal budget promised that the Liberals are going to "review and modernize" both the Broadcasting Act and the Telecommunications Act. As Minister of Canadian Heritage Mélanie Joly wraps up her cultural policy review, the government now faces the hard part: how to intelligently update regulations to nurture Canadian choices without finding itself embroiled in political battles with popular foreign services such as Netflix and Google, Canadian telcos such as Rogers and Bell, and the vociferous user lobby, which likes to position the Internet as a law unto itself.

The budget document takes a predictably anodyne tone, describing an approach that "is focused on the future, and on bringing the best of Canada to the world, rather than a protectionist stance that restricts growth and limits opportunities." But the truth is that Canada's cultural protections have helped produce TV shows, music and books that are sold around the world. And, in the broadcasting realm, new media is simply replacing the old scarcity problem – a finite amount of network prime time dominated by U.S. shows – with a new one: a sea of content in which Canadian choices may get lost.

As the Liberals figure out their modernization, one big issue is whether the broadcasting and telecommunications acts should be merged, since these days our phones can hardly be distinguished from our TVs. Philosophically, it would be a tough marriage. Traditionally, telecommunications regulation was all about access and cost – the government had no legitimate interest in the messages carried on the system – while the Broadcasting Act was crafted to advance one big social goal, the creation and distribution of Canadian content.

Some in the cultural industries think that if you merge the two acts, content considerations will just get lost in the technical and economic juggernaut that is telecommunications. I tend to believe the opposite and think the only way to resolve the imbalance between a thriving distribution sector and struggling creators is to regulate them as parts of the same system. For example, it might be easier to tap the billions raised through government auctions of wireless spectrum for cultural funding if the two areas were clearly linked in policy and legislation.

Whatever the government decides, the difficulty is that new regulations and new funds often come with political baggage: Who likes talk of levies on ISPs or federal rules about programming choices? Look how quickly then prime minister Stephen Harper shut down his own government's legitimate questions about the lack of sales taxes on some e-commerce when he made the popular promise of "No Netflix tax!"

As it figures out the details, the Liberal government needs to continually remind Canadians of the bigger picture, a modernization of the system so that citizens can still find Canadian options and Canadian creators can still contribute to their society. When it comes to the Cancon file, those sunny Liberals need to get working on their own version of The Grand Seduction.

Should we have a ‘Canadian values’ test for films and TV shows?
February 10, 2017
Melanie Joly’s fight for Canadian culture is neither easy nor popular
December 16, 2016 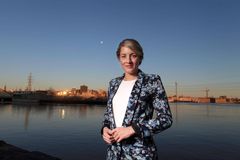 Review
Sadie’s Last Days on Earth: All quirk, no play – it’s the Cancon way
December 9, 2016
Follow Kate Taylor on Twitter @thatkatetaylor
Report an error Editorial code of conduct
Due to technical reasons, we have temporarily removed commenting from our articles. We hope to have this fixed soon. Thank you for your patience. If you are looking to give feedback on our new site, please send it along to feedback@globeandmail.com. If you want to write a letter to the editor, please forward to letters@globeandmail.com.
Comments