Dogs rock, if you believe this documentary first broadcast on the PBS science series NOVA. It's a brisk overview of canis lupus familiaris, with the actor John Lithgow narrating in sprightly fashion. The film opens at a TV-commercial shoot for which a very smart pooch named Dino has been taught to spray an aerosol bottle. And then it works backward, way, way back to the Stone Age, when cavemen first began teaching wild wolves to fetch tennis balls. There's much talk about dog evolution and dog genetics and the science of dog breeding. To demonstrate the range of the modern dog's life, the film goes behind the scenes at the famed Westminster Kennel Club Dog Show, where the pooches are coiffed and very couth, and then visits the horrifying city dump in Tijuana, Mexico, where flea-bitten mongrels scrap for survival, much like their wolf ancestors. Prepare to heighten your respect for the canine species.

Welcome to White Horse Village, situated in Wuxi County in the west of China. Ten years ago, the Chinese government decreed the tiny farming community would become a poster child for the biggest urbanization project in modern history. The plan is to turn White Horse into a metropolis of a quarter-million people, but the transition hasn't gone smoothly. In this report, BBC correspondent Carrie Grace profiles three White Horse residents. Gung-ho businessman Xie Tingming is convinced the urbanization will bring prosperity to all parties. Rice farmer and mother Xiao Zhang is more fearful, but believes the new city will give her children a better life. And then we have the local Communist Party Secretary, who actually seems sad that the agrarian way of life is fading away. Amid these reflections, the building of office towers and roadways is visible in every direction, with construction going on around the clock. It's an eerie snapshot of progress.

Now here's the reason to spring for an HD television. Coming from the same people who made the visually breathtaking Planet Earth, this new series was filmed entirely in high-definition in the Arctic and Antarctic and for the first time in a long time you'll wonder: How the heck did they film that? Four years in the making, the seven-part series is narrated by Alec Baldwin and is startling in its simplicity. Shot against the starkly serene Arctic backdrop, the film is primarily concerned with the indigenous species of the frozen climes. The first show tracks the life cycle of the polar bear, including their mating rituals, and shows a young bison trampled by its own herd and then set upon by wolves. Orca whales team up to create waves to knock tasty sea lions off ice floes. Every creature eats the next creature below it on the food chain. The circle of life has never before looked so savage, or so beautiful.

My stars, this series is a wild ride. A weird spin on the traditional crime drama, the show involves a handful of U.S. marshals who enlist the expertise of convicted felons to help catch prison escapees. Makes sense, right? Except neither group seems to like each other very much, hence there's little of the usual cop-show banter and even less comic relief; the only character who comes close to being funny is the superintelligent convict known as Dr. Lloyd, played by Jimmi Simpson, and he's usually more creepy than amusing. The show returned for its second season two weeks ago and promptly set about breaking some major TV rules: Last Sunday, the pivotal figure of Marshal Charlie Duchamp (Laz Alonso) was killed off by an escaped psychopath. It was a shocking end to a likeable character. The team is still reeling from Charlie's death in this new episode, but they're also searching madly for a fugitive stool pigeon with a very dark secret. This is gutsy TV. 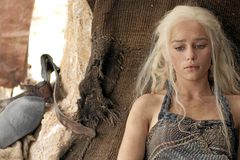