In the late-night TV battleground, consider Craig Ferguson to be Switzerland. Or, even more than neutral, an interested party who is completely disinterested. With changes afoot in the late-night talk landscape, often portrayed as a cutthroat, feud-fuelled environment, Ferguson says his interest lies in only one thing: doing his job.

"It's not a competition. I don't view it that way. I'm not a television executive. I don't care about that. What I want to do is make you laugh. That's what I want to do. What time I make you laugh is your business. I don't care," Ferguson told The Globe and Mail in an interview, referring to suggestions that have been made for years that he must be eyeing an earlier time slot. "People have a hard time believing that too. But I've already made more money out of this than I ever thought was possible. What should I care about? Do I keep raising the bar on myself for some imaginary thing that somebody says I should want? That just makes you unhappy. I'm not saying that I never fell victim to that, but I think I'm over it."

Next February, Jay Leno will exit as host of NBC's The Tonight Show, replaced by Jimmy Fallon, who is currently up against The Late Late Show with Craig Ferguson on CBS. Saturday Night Live alumnus Seth Meyers will replace Fallon, becoming Ferguson's direct competition. With Fallon out of the mix in that time slot, it could be an opportunity for Ferguson to gain some ratings ground. But while Ferguson is obviously aware of what's going on, he says he's not paying attention, and the impact of the shift on his own show will be zero.

"I'll just do the same old crap.… It will not affect what I do in any way whatsoever."

Ferguson was in Alberta this week to receive the Sir Peter Ustinov Comedy Award at the Banff World Media Festival. "My people built this country," he told a packed ballroom at the Banff Springs Hotel, later adding that he has a personal relationship with the country. "I've had sex with Canadians."

Ferguson, 51, was born in Scotland and moved to Los Angeles in 1994 (after a stint in New York in the 1980s, when he worked in construction – illegally, he says). It was in an audition for the role of a Hispanic photographer on the Brooke Shields sitcom Suddenly Susan where Ferguson impressed a Warner Bros. casting director, who asked him if he could do an English accent for a guest role on The Drew Carey Show. He was not meant to join the show permanently, but after a couple of episodes playing Carey's posh British boss Nigel Wick, Ferguson was asked to join the cast. It was his breakthrough role.

He took a 10-year break from stand-up, and when he returned, gigs included appearances on The Late Late Show, then hosted by Craig Kilborn. After Kilborn's departure, legendary late-night producer Peter Lassally asked Ferguson to guest host.

In Winnipeg shooting the feature Niagara Motel (which he's never seen), Ferguson agreed to do it. "It should be a lark," he told Lasally. But Lasally corrected him: "He said, 'No this is not a lark.' He said, 'If I'm right about you, you're lightning in a bottle.… You're it, if I'm right. You're the guy that we're looking for.' And I said okay … and I thought, poor old man's gone senile," Ferguson told the festival. "But I think he was right."

Ferguson took over in January, 2005, with show executive producer David Letterman and CBS head Les Moonves providing a protected environment for him in those early days. "I could take my time, stumble and not be cancelled right away," he says. With his expressive face, Scottish brogue, dry humour and truly off-the-cuff approach, Ferguson has become a late-night fixture.

Ferguson is one of five writers on the show, and insists on keeping things spontaneous. He uses only bullet points for his opening monologue, famously rips up cue cards before interviews (there are carefully crafted questions on there, he says, they're not just props), and refuses to see whatever movie an actor is coming on to promote. And before taping, he steers clear of Josh Robert Thompson, who operates and voices his animatronic skeleton robot sidekick Geoff Peterson. None of their interaction is planned.

"There's no prep for that at all, zero, absolutely as a rule," he told The Globe. "None ever, none. People have a real hard time believing that, particularly people in television."

(His original inanimate sidekick – meant to poke fun at the cliché of late-night sidekicks and their predictable, pat answers – was a potato. He says he's considering bringing it back.)

Ferguson has been candid about his once debilitating abuse of drugs and alcohol, an issue which he has dealt with on the show and in interviews.

"I'd be dead by now if I hadn't [stopped drinking]," he told The Globe. "There's an absolute line I can draw down my life before and after my use of alcohol, or alcohol's use of me, which is more accurate. I wasn't capable of doing what I do now when I was drinking. I couldn't do it. Tried, but couldn't."

He also says being open about the issue was "probably essential" to his success.

"I kind of think it probably at some point was going to have to come out or else I wouldn't have been able to maintain an honest connection with the audience."

Ferguson, who won a Peabody Award for his interview with Bishop Desmond Tutu, has also written two books, several screenplays, and has another film project in the works: Last Man Out, based on the Stuart Neville novel The Ghosts of Belfast, is slated for production later this year, he says. He calls it "a very, very dark story of murder and revenge."

In the late-night battle, Ferguson casts himself as the friendly outsider: He's on good terms with his on-air rivals: Leno, Fallon and ABC's Jimmy Kimmel, and with his boss, Letterman – for whose time slot Ferguson is a possible successor, once the elder statesman of talk retires.

"I don't emotionally invest myself in anything that's going on. I keep an eye on it, but for no real reason. I have no ambitions there. I'm perfectly happy with what I have at CBS at the moment."

He says he just does his thing, and leaves any cutthroat business dealings to the executives.

"I care if enough people are watching me so that I don't get cancelled. But that being said, the guy who has been getting the most viewers consistently for years has been fired twice in the last couple of years, so that doesn't seem to make any … sense either. I don't know. I'm just trying not to get myself into too much trouble, that's all." 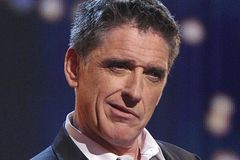 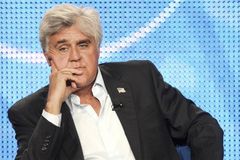