It's press day for Game of Thrones, Season 4, at the Corinthia Hotel in central London, and HBO has taken over an entire floor and covered it with free pastries and antsy publicists. International media, along with an army of camera crews and dozens of cast members (the show has more than 300 speaking roles) mill about the hallways drinking coffee and gingerly parrying with makeup artists waving their magic wands.

It's the usual promotional circus for a show that doesn't need the usual promoting. Game of Thrones is the most-watched HBO series ever, with an average gross viewing audience last season of 14.2 million people. But more crucially, it's also the most illegally downloaded show in history, which means that that 14.2 million is really just a drop in the bucket.

Before this assignment, I'd never watched an episode. Then, last weekend, in the name of research, I gorged on the entire first three seasons – 30 straight hours of sexposition, slit throats and dragon fire. I emerged wild-eyed and shuddering, clutching my burnt rags to my breast like Daenerys Targaryen after she walks into the fire and gives birth to three dragons.

"The night is dark and full of terrors," I announced to my scared-looking husband. By which I meant: Thank God for box sets in February.

This is the transformative power of Game of Thrones. A week ago, I'd have sniffed at the notion of "The Sopranos in Middle Earth," as the show has been jokingly billed by its own creator. Today, I consider myself a newly minted superfan.

I am not alone. The most recent ratings prove that the Throne's female audience is growing, and now stands at 42 per cent of those many millions – an impressive figure for a series technically billed as fantasy, and known for an exposed-breast-to-exposed-penis ratio of roughly 876 to 1.

Why do women love it? Yes, Game of Thrones has a lot of spurting blood and gratuitous brothel scenes. And yes, there are dragons and zombies and sword fights.

But it is also psychologically complex, a staggering feat of imagination. Characters you loathe find redemption; others you cheer on make terrible mistakes.

In short, it's unpredictable and morally troubling – and not just because of all the shagging and killing.

True, the show technically qualifies as "genre." But the fact is, Game of Thrones is not just good viewing for a fantasy show; it's good viewing by any standard.

Back at the Corinthia, I find myself crammed around a table with a bunch of European reporters listening to Maisie Williams, the 16-year-old British actress who plays Arya Stark (tomboy daughter of one of the many families battling for the Iron Throne) talk about why she is not hugely bothered by rampant piracy of the show that has made her famous. "I can't control what people do," she says with a shrug. "And DVDs are so expensive, it's crazy."

Alongside Williams, we are treated to the civilized presence of Scottish actor Rory McCann, who plays her bloodthirsty escort/kidnapper Sandor (The Hound) Clegane. They joke affably, their banter a world away from the pair's onscreen sniping. Also on hand are the real-life avatars of villainous incest fan Jaime Lannister; and his lady-knight escort, Brienne of Tarth, all six feet, three inches of her.

As the Euro reporters anoint them with fawning questions ("How did you feel when you got the job?" "Who's your favourite character?"), I find myself marvelling at how healthy all these actors look in real life. On the show, The Hound's face is a half-melted mess, his mad brother having pushed it into the fire when he was young (Hands off my toys!). Brienne has been mauled by a grizzly bear. Jaime's got a cauterized stump where his sword hand used to be. And those are the characters who actually lived through the third season.

Game of Thrones is one of those cultural products that is difficult to talk about without sounding like a hopeless nerd. When Carice Van Houten, who plays the cunning Red Priestess Melisandre of Asshai, enters the room with her co-star Liam Cunningham, what I most want to ask her is this: "Will Stannis Baratheon ultimately surrender the Lord of Light and take the Iron Throne? Or will a heavy darkness fall on the Seven Kingdoms as the stars bleed and the dead rise beyond the Wall?"

Instead, I ask Cunningham (who plays the honourable sea captain Davos Seaworth) if he actually bothers to keep track of the show outside of his arc of the plot. "I look at every page and every word of every script and I watch every episode," he says. "It's a weird job, because it's the only show I've been a part of where I actually do watch as a fan."

The appeal, he explains, is just good old-fashioned storytelling. "It's like that saying that all art should aspire to music. The storytelling here is universal. It's a great big sprawling tale of good and evil. It doesn't get much better than that."

"But the night is dark and full of terrors," I almost remind him. Instead I shut my mouth and silently await Season 4. 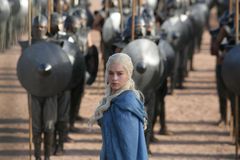 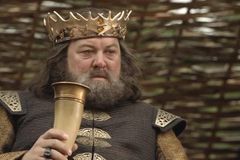 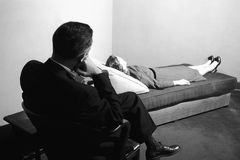