Michael Wylie is in production designers' heaven. As he leads reporters on a tour of sets he designed and had built for the new TV series Legion, he says he has been given a freer-than-usual hand to let his imagination run wild.

He has unleashed his imagination into a pretty big playground.

Sets for the series, based on the X-Men-related character, were built in a 160,000-square-foot former supermarket warehouse in this city southeast of Vancouver. It feels as large as a pair of downtown Vancouver city blocks. Throughout the tour, there's the strident ringing of bells to indicate that cameras are rolling elsewhere in the vast space where shadows are broken here and there by lights for filming.

The freedom is notable on Legion because the series is based on the realm of the X-Men – the righteous, heroic mutants featured in six films since Bryan Singer's X-Men in 2000. There's been a largely consistent look to the characters and settings since then.

But that all appears to have been enthusiastically chucked out the window with Legion, which will run eight episodes in its first season on on cable channel FX in Canada and the U.S. The series was created by Noah Hawley, the American novelist and screenwriter who has been acclaimed for his lively TV adaptation of Fargo, based on the 1996 Coen brothers' movie about nefarious doings in Minnesota.

"I think the nature of this story and this story world is that it's not as beholden to a certain aesthetic as some superhero stars are, in that sense," says a chipper Dan Stevens, who played ill-fated Matthew Crawley in the British series Downton Abbey.

In Legion, Stevens is playing David Haller – a.k.a. Legion. In the comics, Legion was a mutant with dissociative personality disorder whose personas each had access to individual superpowers such as telepathy, telekinesis and pyrokinesis. He was also the son of X-Men leader Professor X – a.k.a. Charles Xavier.

But there was no talk of any such links during the media tour held in the fall as work was under way on the seventh of Legion's eight episodes. "I don't know who Professor X is," actress Jean Smart, who co-stars in Legion as a mutant therapist, said politely during an interview.

And Stevens himself said Legion won't exactly be like X-Men films. "It doesn't feel like a superhero show. None of us yet have capes or horns or anything quite like that," Stevens told reporters during a break from filming.

The series does not take place in any fixed time. Cars from the sixties exist with modern-day cars. Clothing is a mishmash of present-day and past fashions. As one cast member notes, it's a kind of "sixties, mod-Britannia realm." It's the future as imagined from the perspective of the 1960s and 1970s. Another cast member says the proceedings have the visual tone Stanley Kubrick created for his feature films A Clockwork Orange and 2001: A Space Odyssey.

"We're just trying to confound everybody," says a bemused Wylie.

In a conference call with reporters, Hawley said he had read X-Men comics, but was not interested in a straightforward adaptation of that material. "There was no rulebook or anything I was handed when I came on."

He also said he was steering clear of the angle around specific powers being linked to varied personalities created by Legion's multiple personality disorder. Rather, he said, he was intrigued with the premise of someone who has to reassess their assumptions about themselves.

"What we get into with David is this idea that he has lived for 30 years and this identity he believes in is actually fake. Maybe he doesn't have mental illness. Maybe he has these abilities. If that's so, he has to go back and rewrite the story of himself. That, to me, was a fascinating existential journey that I wanted to take."

Hawley said he approached the material in the same way he approached Fargo, where the mandate was to adapt the film about homicides linked to a nefarious kidnapping plot in Minnesota for TV without using its specific story. "[It] was a very odd thing to think about, which is: How do you take the essence of a story and translate it into a completely new story," he recalled. "But it liberated me in a lot of ways to create something where I wasn't imitating. I wasn't taking pieces that [filmmakers Joel and Ethan Coen] had created and sort of mimicking them."

With Legion, he says he, similarly, wasn't interested in adapting specific issues of X-Men comics, though he was inspired by the material. "As I looked at it, the character led me to the story, which led me to the style and so, in many ways, if you're going to watch the show looking for story lines that you recognize, that wasn't my intention. My hope is to create something unexpected."

He says Marvel has been supportive. "I am not sure they knew what to make of this as I came to them with this out-there idea for a show. It doesn't really fit into all of the other shows they're doing and I think that's exciting for them in that they get to just give me the rope for me to run or hang myself or whatever I am going to do with it."

Cast members and production staff promise drama, complicated relationships, action and mutants. Beyond that, details are limited, and some that were fairly obvious during the sound stage visit cannot be revealed without spoiling the show.

The X-Men films, which made Australian actor Hugh Jackman – a.k.a. Wolverine – a star are old news on the big screen. And there have been X-Men cartoons. But live-action TV is a new frontier for the franchise. Various X-Men-related TV series were on the drawing board, but Hawley won the race to get one to the sound stage.

Smart, nominated for an Emmy for her work on Fargo, says she knew nothing about comic-book superheroes, but signed on quickly when asked to join Legion. "Noah asked and I said yes. It didn't matter what it was about. I kind of came into it blind," said Smart, well known for her work in the sitcom Designing Women, and for playing a troubled U.S. first lady in 24.

Hawley has laid out a creative mandate for his team, says Wylie. It is this: "This story is being told from an unreliable narrator so we can do whatever we want, so that's a really fun part of doing the show," says the production designer.

"What that means to us, is 'Everything goes.'"

So Wylie's sets include the slickly furnished interior of a giant ice cube that's the brain of one mutant – though Hawley apparently prefers to refer to "people with abilities." Elsewhere, there's David Haller's apartment, which seems both modern and vintage – as confused as the character.

And there are the corridors and vast day room for the Clockworks Mental Hospital – a 23,000-square-foot set. This was the most complicated set to develop, he says. "Trying to make a hospital feel fun is a perfect challenge."

Asked about shooting in the city, Hawley wryly said, "I heard all television shows are shot in Vancouver. That's why we went up there. But, no – Vancouver offers an amazing array of looks and feels and, obviously, a great crew base and everything. We were thrilled to be up there." Hawley's Fargo TV series has been shot in Calgary and other parts of Alberta.

Wylie was inspired by the brutalist architecture of the 1950s to mid-1970s, which often features bulk and exposed concrete and is typically seen in government and institutional buildings. "We shot all the exteriors at UBC where they have a lot of that sixties and seventies brutalist architecture and kind of embraced it," explained Wylie.

But while there will be streaks of the traditional X-Men films in the DNA of Legion, Wylie notes that some props from the feature films have been brought to this sound stage from storage in Montreal – where the last two X films were shot – and the United States.

He did not say how they would be used, but, as with everything else, he has a free hand.

"You don't have to follow any rules. If you come up with something, you can do something because you think it's cool, or that it's pretty or it manipulates somebody," he said, then added with a smile, "We're in the manipulation business here." 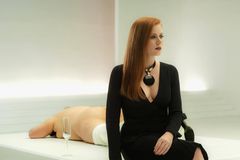 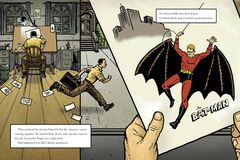 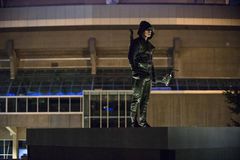