In 1953, Frank Olson, a scientist and family man who worked for a mysterious arm of the CIA, jumped out a hotel window to his death in New York City.

The who/what/when/why background to the death is the subject of the latest mind-bending work from Errol Morris (The Fog of War, The Thin Blue Line), one of the most famous and acclaimed documentarians working today.

Wormwood (now streaming on Netflix) is one of the strangest, most tangled stories Morris has told. It's a true-crime series in four parts, but true crime done at the most elevated level, a strange and eerie journey. Not just about the man who died, but about his son, Eric, who has spent more than 60 years trying to uncover and understand the top-secret antics of the CIA and various U.S. governments. Eric believes, sometimes, that his father got in trouble and was killed. What Morris investigates is not just the father's mysterious death, but also the possibility that Eric may have been wasting his time over the decades.

The words "fall, jump, accident" become key in the opening of Wormwood. They were words used by different figures to describe what happened to Frank Olson. To Eric Olson, they are like a chant. He repeats them and asks: "How do I arrange this triangle of terms? How do these terms comport with each other?" As Olson chants, Morris uses multiple split-screen effects to emphasize the multiple-mirror-like quality of the saga he's trying to figure out, and that the younger Olson cannot, because he's so involved, so confused by decades of half-truths.

Morris also uses, to wonderful effect, dreamy, evocative dramatizations of the Frank Olson story. These are done with a Mad Men-like attention to period details, diction and dress. Some are sumptuous celebrations late-1950s style. In these extraordinary segments, Peter Sarsgaard plays the troubled, depressed Frank in the period leading up to his death, and Molly Parker plays his wife. The inclusion of these dramatizations takes Wormwood away from being a conventional documentary and into the realm of a hybrid of docudrama and speculative documentary. Add in the use of archival footage and scenes from films that are key to understanding both Frank and Eric, and the production becomes something beautiful but indefinable.

What is certain about the context of Frank Olson's work and death is that he was involved with a CIA team that experimented with using LSD, either to figure out how to make people mentally unstable or to gain truth from spies and other captured persons.

The experiment went terribly awry. In the mid-1970s, in the immediate post-Watergate period, the Rockefeller Commission reported that the CIA had indeed carried out illegal activities on a large scale. Investigative journalist Seymour Hersh had reported on what the CIA group was doing, and as far as the Olson family was concerned, had revealed the truth. Eric recalls Hersh visiting the family home and saying to them, "You must be the most uncurious family in America," a sarcastic remark about the family's lack of knowledge. Here in Wormwood, Hersh is formidably cagey, and says of the Frank Olson mystery, "It's wonderful to not have an ending,"

The Olson family got an official apology from president Gerald Ford in the Oval Office, but Eric suspects it was done to head off a lawsuit that might reveal more about what happened. Eric slowly emerges as someone who is paranoid about government actions, but has every right to be suspicious.

As a true-crime series, Wormwood is not going to deliver the highs and the twists of Making a Murderer or HBO's Jinx. It's a demanding and complex web of interviews, dramatic scenes and more interviews. It's gorgeously made, glowingly strange and, in the end, is about very human complications that are beneath the surface of jobs, family and government, obscuring what we want to be "truth," and frustrating us all. Your heart breaks for Eric Olson, you seethe at government secrecy, and you feel, in the end, that you don't know the man who died at all.

In the age of fake news, director Errol Morris shoots for the truth with Wormwood
December 14, 2017 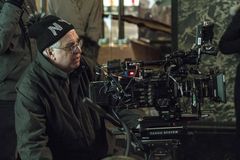 Now on TV: Round two of Trump’s sexual-misconduct battle
December 11, 2017 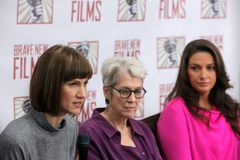 Big Little Lies returning for a second season on HBO
December 8, 2017
Follow John Doyle on Twitter @MisterJohnDoyle
Report an error Editorial code of conduct
Due to technical reasons, we have temporarily removed commenting from our articles. We hope to have this fixed soon. Thank you for your patience. If you are looking to give feedback on our new site, please send it along to feedback@globeandmail.com. If you want to write a letter to the editor, please forward to letters@globeandmail.com.
Comments