There is an admirable frankness about what Don Cherry does on Hockey Night in Canada. He lauds the Canadian military and lionizes soldiers. They, in turn, worship him.

Certainly that's what unfolded during the first intermission on Saturday's Hockey Night in Canada. Cherry was made "an honorary Patricia" by members of the Princess Patricia's Canadian Light Infantry. We were shown the event on-air in what was one of the more surreal segments ever broadcast on public television - that is, outside the state-run TV services of tinpot military dictatorships.

A group of men in military uniforms, solid guys, some with abundant medals on their chests, told brief stories in the kind of military vernacular that is largely incomprehensible to outsiders, but is understandably indulged. The upshot is that Don Cherry was so appreciated by some soldiers serving in Afghanistan that they'd made a camouflage-sweater thing for him (he was wearing it already) and he was made an honorary member of the infantry. He was well pleased.

The segment went on interminably, to the point where one wondered if some analysis of the game between the Sens and the Leafs was going to break out any time soon. It didn't.

Some people watching must have been made uneasy by the casualness of the intrusion of the military, the blithe acceptance of Cherry's elevation to honorary soldier. This, after all, during a break in CBC's coverage of an NHL game. If some viewers were uneasy on any level, they were wasting their time. To dislike Don Cherry and his antics is an utter folly.

Cherry is as constant as a canal horse, following the same straight path relentlessly, pulling a barge of barking patriotism and notional Canadian authenticity. He is a professional TV barker, a peddler of authenticity, exorbitantly rewarded to embody what is sometimes called the lunch-bucket crowd. He exists in an irony-free zone.

To rail against him, his views and antics is madness. His are approved views, made authoritative by his embrace of the military and their embrace of him. His authenticity might be notional but it is the official one. It is Canadian-ness now. To have a different view is to be an obscurantist, a lonely dissident finger-wagging and sighing on the distant sidelines. It is to be like one of those shadowy figures in a Cold War novel set in a satellite country of the Soviet Union. The person who is afraid to have his views known.

So, never mind Cherry. He is wrapping himself, not just in the flag, but in the flags that drape the coffins of slain youths in our military. He is what he is and represents an engulfing orthodoxy. For now, anyway.

CBC plays a role in all of this. CBC is complicit in the unsubtle shifting of the meaning of hockey in Canadian life - from being emblematic of a culture of survival to an offshoot of the military, with an underlying meaning that has something to do with Canada being a warrior nation. Hockey is a fast, beautiful and thrilling game. Some say that hockey is part of the lifeblood of the Canadian culture precisely because it's about survival on the hard, unforgiving ice in the face of the eternal enemy of the elements. Now it's about soldiers, war, warriors and the acceptance of death after death in war.

CBC Television, a public broadcaster, allows Cherry to do what he does and allows HNIC to stray from broadcast and analysis of NHL hockey to engage in a passionate love affair with the military and all its doings. If you don't like it, just shut up. Zip your lips if you think the CBC is diminished or the brave and hard-working military are demeaned by engagement in this theatricality of patriotism. It's the way things are.

Of course, there's nothing unique about the union of a national sport and militarism. In England, coverage of the national soccer team is sometimes steeped in military iconography. The players are soldiers, the captain is an officer, the World Cup is a war. Before the most recent World cup, the tabloid The Sun reported triumphantly that the team captain's great-great-grandfather had fought bravely in the First World War - charging though the mud at the battle of the Somme, "with bayonet fixed" and dying a hero.

Exactly a year ago I was at Wembley Stadium in London for England's final World Cup qualifying game. It was "Armed Forces Day" and military figures carried out the flags of the two countries and paraded at half-time. There was polite and widespread applause, though nothing like the thunderous ovation that greeted David Beckham when he appeared, limbering up on the sideline. Armed Forces Day played no part in the BBC's coverage, and it's the tabloids, not the BBC, that dream up military imagery for the national team.

Here, it's different. There is that assertive candour in what CBC and Don Cherry do. It's Canada now. Approved and official. Perhaps one day we'll want to probe this, maybe even be allowed to disapprove. 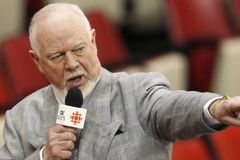 The CBC, and the difference between soccer and hockey
April 29, 2010 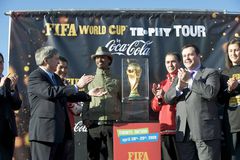 The wrath of Grapes
May 21, 2010
Follow John Doyle on Twitter @MisterJohnDoyle
Report an error Editorial code of conduct
Due to technical reasons, we have temporarily removed commenting from our articles. We hope to have this fixed soon. Thank you for your patience. If you are looking to give feedback on our new site, please send it along to feedback@globeandmail.com. If you want to write a letter to the editor, please forward to letters@globeandmail.com.
Comments