When a movie shoot wraps or a play run closes, certain roles are tough for an actor to say goodbye to. For Audrey Tautou, the part of Coco Chanel wasn't one of them.

"For me, Chanel was in a state of internal violence, of anger, because she wants to be someone, do something with her life, but doesn't know how, so this part of the character was quite heavy to carry inside me," said the gamine French actress about her powerful performance in Coco Avant Chanel (Coco Before Chanel) . The French feature about the icon's early years is now playing in Montreal and opens elsewhere in Canada tomorrow.

"Even though this hardness wasn't something I directly expressed in every scene, it was something I had to have in every scene. Chanel was not a light person, she's too preoccupied by her destiny. So when I finished the film, I was happy to let that part go. It can get tiring."

Along with director Anne Fontaine ( La Fille de Monaco, Love Affairs Usually End Badly ), Tautou was perched in a Montreal hotel room to promote Coco Avant Chanel 's North American release. Dressed in a grey suede jacket and tank top, skinny jeans, and ballet flats, the 33-year-old best known for The Da Vinci Code opposite Tom Hanks (2006) and Le fabuleux destin d'Amélie Poulain (2001) looked like a tiny, radiant fireball. Her hair, dyed black, was cut into a tousled bob, her lips and nails painted red. She's perfectly cast as the ambitious, androgynous mademoiselle who went on to found the French fashion house, free women from corsets, and invent the little black dress. Fiercely independent until her death in 1971 at age 87, Chanel refused to conform to the world's notion of what a woman should be, and, rather, changed the world to suit her truth.

"She was a feminist before such a thing really existed, and decided to acquire the same freedom that men had," said Tautou. "She rejects the hand life has dealt her and takes her destiny in hand. She literally invented her own life. C'est formidable ."

Tautou seems sweeter and more charming than the woman she plays with such contained intensity, but she, too, exudes confidence and speaks with conviction few would argue with. In fact, so focused was she on our interview that when voices from the hall outside became distracting, she marched over to the hotel room door, pulled it open, and firmly asked the astonished flurry of publicists and media waiting there to please speak more quietly so we could concentrate. " Merci !"

As the movie tells us, Gabrielle "Coco" Chanel grew up in an orphanage with her sister and became a courtesan, aspiring actress and singer - though not exactly a good one. (The nickname Coco came from a song she used to belt out in nightclubs, about a lost dog of the same name.) As she manoeuvres her way into high society, we see her strength, street-smart humour and need for love. We learn of her relationships with two men, Étienne Balsan (Benoît Poelvoorde) and Boy Capel (Alessandro Nivola), both of whom eventually enable her to choose work over marriage. We see her discover her calling, and, after tragedy, devote her life to work.

And, during a time when women were literally tied up in corsets and frivolous gowns, we understand fashion's political side: clothing's basic power to repress or liberate. Fontaine calls it "fashion through life," pointing out that Chanel's very first designs (simple hats and modified menswear) resulted from practical needs. "She wants to go ride horses, to run, to be free, and when you are with the corsets and ridiculous hats and dresses, you can't live," said the 50-year-old director, who co-wrote the screenplay for Avant Chanel "loosely based" on Edmonde Charles-Roux's book L'irrégulière: ou,mon itinéraire Chanel .

A former actress and model, Fontaine relates to her heroine's need to control her fate. "For me, to be an actress was to depend on the desire of somebody else," she said. "And I felt very uncomfortable that somebody can decide if I was okay or not okay, if I could do the part. At 25 years old, I said, 'I can't have a life like that, it's not possible.' So I quit, modelled to make money, and I began to write … And like that, I did my first movie. I was completely self-taught, but I knew the story I wanted to tell."

But was loneliness the price of Chanel's independence? Tautou isn't sure. "She had an enormous amount of love in her life. She was often in love, she was always with men. But she said all her life she was lonely. This, I believe, was part of her nature. Don't forget, at her core she was an abandoned child. That's something you keep inside yourself all your life, I don't think it's a question of destiny, but more a question of the past, of her baggage."

Like a lipstick stain on silk, Coco Chanel's presence seems to haunt even these proceedings. Yes, she left us a fashion empire. But this film, the women who made it, and, perhaps, audiences, too, are left equally steeped in her emotional legacy: the drive to create an authentic life - even if this life challenges the world around us.

At the end of the interview, Tautou (whose next project is a play in Paris) pulled out a digital camera and asked to take my photograph, explaining that it's just for her, a little something she does with every journalist. "If not, it all just disappears." 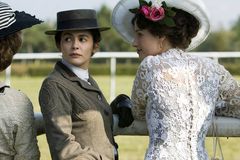