Worn down by an escalating legal dispute with her former art dealer, Rebecca Belmore - one of this country's most prominent contemporary artists - arrived at a difficult decision over the Labour Day weekend.

Nearly four years after terminating her relationship with gallery owner Pari Nadimi, and three years after Nadimi began legal proceedings against her, the Anishinabe artist had had enough. "I was thinking about the pressure of the lawsuit, and I thought: 'Well, what if I just quit? What if I just quit making art? Then there'd be no problem with making money.' "

A week later, on Sept. 11, Belmore staged what would become a much-discussed performance art piece, in large part because of the way it ended: with the artist shouting "I quit!" The Canadian art world was stunned. Was Belmore - who represented Canada at the 2005 Venice Biennale - really quitting?

In her first interview since staging Worth ( - Statement of Defence), Belmore has revealed to The Globe and Mail that she had planned to issue a formal statement on the Tuesday after the long weekend to announce that she was quitting.

"Maybe I was a little crazy at that point," she said in her East Vancouver studio this week. "But when I look back at that moment, that weekend, I thought: 'If I lose this lawsuit, or if I can't defend myself against this claim, I have no idea what I'll do.' "

Nadimi, who is based in Toronto, represented Belmore from 2000 to 2006. The dealer alleges that Belmore terminated their agreement without notice, interfered with the gallery's sale of her art, and that when she left the gallery was in active negotiations for nearly $1.1-million worth of sales revenue in connection with the artist's works.

In her statement of defence, Belmore argues she had the right to refuse the sale and did so for "personal artistic reasons."

"It took my breath away," Belmore says of the dollar amounts attached to the most recent amendment to the statement of claim, which was filed in Ontario court in June and raised the amount sought for damages for wrongful dismissal from $250,000 to $750,000.

In her statement of claim, Nadimi makes specific reference to the Biennale.

"The Art Gallery's efforts to promote Belmore were highly successful. In 2005, Belmore was named as Canada's official representative at the 2005 Venice Biennale, one of the pre-eminent international art exhibitions in the world. This achievement represented a tremendous accomplishment for both Belmore as an artist and the Art Gallery as a successful promoter."

The statement alleges that Belmore stopped a sale of her work Megaphone to the National Gallery shortly before the work, valued at about $100,000, according to Nadimi, was to be shipped.

This was "embarrassing to the Art Gallery, damaging to Nadimi's professional reputation and caused her significant mental distress," her statement of claim reads.

But behind the scenes at the time, Scott Watson, who co-curated Belmore's Biennale work, was urging the artist to part ways with Nadimi. Belmore says she stuck with Nadimi because it didn't feel right to leave. "I felt it was unethical to leave her when I was getting this tremendous gig, and I thought it's not fair to her; it's not a very nice thing to do."

Nadimi has not returned calls from The Globe and Mail and her lawyer says they won't discuss the matter as it is before the courts.

The lawsuit has weighed heavily on Belmore, 50, and on Labour Day weekend it reached the boiling point.

Friends and family managed to talk her out of quitting on back-to-school Tuesday, but spending that week discussing the fight with her legal team (two advisers - one in Toronto and one in Vancouver - are volunteering their services) only reignited her turmoil. "I started to get all undone again."

By Saturday morning, Sept. 11, Belmore was a mess.

"It was a traumatic morning in my household ... I thought there's no time like right now. I feel this immediately now, this morning. It was very intense. I thought I'm tired of it interfering with my home life, my marriage, my relationships with my sister, my friends. I'm sick of talking about it. I'm sick of listening to advice. I'm sick of seeking advice. So I thought, 'Well, let's just go out and do something today.' "

At about 9:30 that morning, Belmore called up artist Harold Coego, with whom she shares a studio, and asked for his help. They bought some supplies, and on the street outside her studio painted the sign for the performance. "I Am Worth More Than One Million Dollars To My People," it read.

The sign was done by about 2 p.m. An hour later, Belmore staged Worth outside the entrance to the Vancouver Art Gallery. She sat cross-legged in front of the sign and a garbage can, then scrubbed the sidewalk, laid out pieces from her work Wild, and lay down. Then, after carefully wrapping the pieces up, she presented them to Daina Augitis, chief curator at the VAG, and yelled "I quit!"

The declaration was spontaneous. "It just slipped out of me. It came to me naturally to say that at the very last minute."

But gifting the work to the VAG was a deliberate and integral part of the performance. "[ Worth]started with the whole idea of: what is an artwork worth? ... Who is allowed to give and whose right is it to take? So it's all about giving and taking and the fact that the art - not just the object, more the idea - belongs to me.

"Artists, I think, are very generous people and I wanted to publicly illustrate that."

After the performance, Belmore felt "immense relief" that her plight had been made public. And help came. Within a couple of days, Watson purchased the sign from Worth for the Morris and Helen Belkin Art Gallery at the University of British Columbia, where he is director and curator. Glenn Alteen with Vancouver's Grunt Gallery launched a Rebecca Belmore legal defence fund, which has attracted more than 950 supporters on Facebook and raised about $1,500. Alteen is also organizing an online fundraising auction, with artists such as Ed Pien, Sonny Assu, Kelly Mark and Lawrence Paul Yuxweluptun donating works.

The support has buoyed Belmore. She is feeling recharged. The night before her interview with The Globe, she started making art again: a T-shirt reading "Thank you."

Still, she isn't ruling out quitting in the future. "Who knows? If I lose, and I owe somebody tons of money, then maybe I'll quit. I used to be a really good waitress."

At this point, none of the allegations in this case have been proven in court. Belmore will rely on the funds raised to travel to Toronto and fight the lawsuit. She says she does not have the money to cover lawyer fees - or more than $750,000 in potential damages.

"Even though I've had all this critical success, it doesn't necessarily boil down into dollars," she said. "As an artist, I'm not obsessed with making a lot of money. I'm more obsessed with being a good artist and trying to contribute to culture. I'm not out to make a million dollars. 'Cause I'm worth much more than that - as the sign says."

B.C. artist takes her legal woes to the level of performance art
September 15, 2010 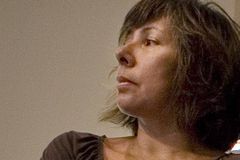