The National Gallery of Canada in Ottawa unveiled its third biennial of Canadian contemporary art this week. Titled Shine a Light, it includes a selection of acquisitions made by the NGC over the past two years in the areas of contemporary, indigenous and photographic work, which means, for museum-goers, a chance to kick the tires: Just what have these curators been up to in the nation’s capitol?

Well, it turns out, plenty. The show revisits some key moments from the past 24 months, such as Shary Boyle’s mise en scene The Cave Painter, complete with in situ mermaid, and staged here with a new proscenium following its vernissage at the 2013 Venice Biennial. (It’s shown to better advantage here, unconfined by the Canadian Pavilion’s eccentric spaces in Venice.) We can also revisit Geoffrey Farmer’s ambitious sculptural installation Leaves of Grass, which he has restored, expanded and extended from its original display at dOCUMENTA (13) in Kassel, Germany, two summers ago. (The piece now incorporates 20,000 paper cutouts into a diorama of 20th-century history, and will grow during the exhibition.) 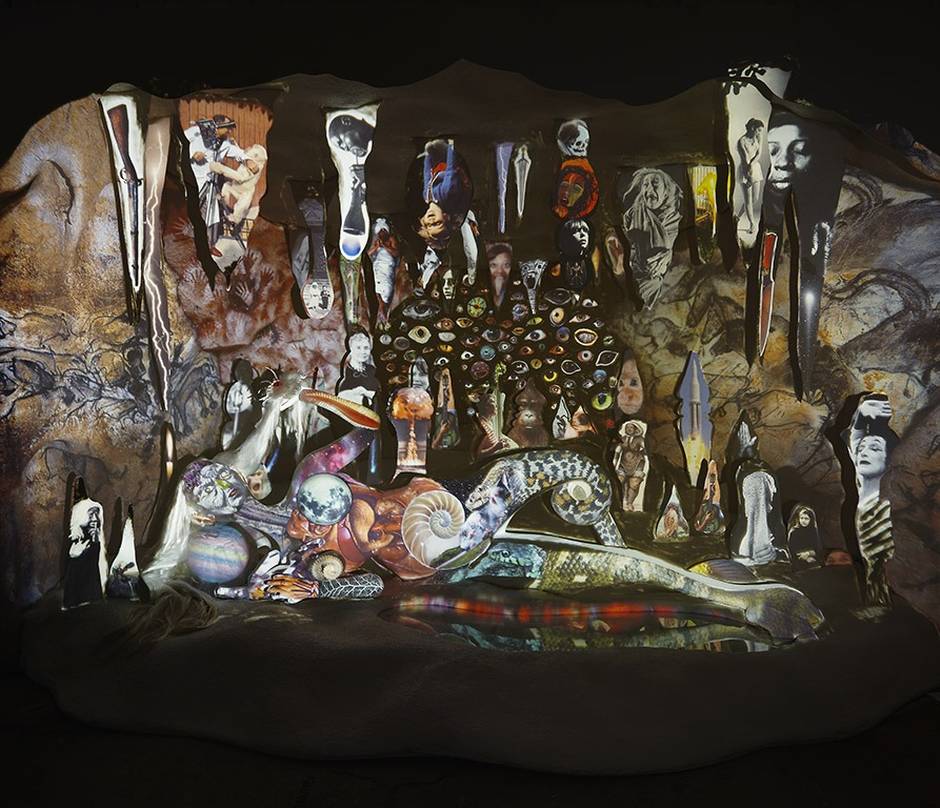 A few mid-career artists took their places here with assurance, such as Toronto’s An Te Liu (a handsome suite of plaster and earthenware modernist-seeming sculptures made from casts of industrial packing materials) and Vancouver’s Damian Moppett, underserved with just one painting of his studio, bluntly but sensuously abstracted. (He’s one of the strongest painters in Canada today, though his reputation as a sculptor still tends to dominate public perception.) 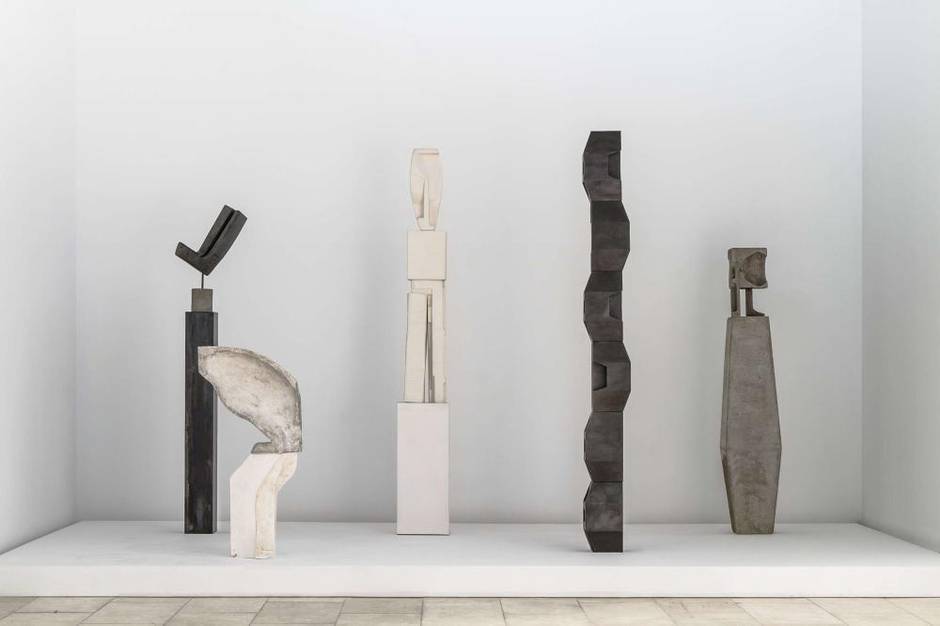 An Te Liu's 2013 sculptures Obsolete Figure in Space, Aphros, Order of Solids, Gnomon, and Chimera are featured in the National Gallery of Canada's Shine a Light exhibition. (Dustin Yu)

The art of Canada’s indigenous peoples continues to be central to the gallery’s acquisitions plan. This show is strong in art from the Far North, with the NGC continuing to make consistently fine purchases of works by Cape Dorset artists Shuvinai Ashoona, Jutai Toonoo and Tim Pitsiulak. Many will be aware, too, of the work of Salish artist Lawrence Paul Yuxweluptun, but can refresh their memories here with a number of works donated by Vancouver collectors Jack and Maryon Adelaar. They are exhibited alongside the NGC’s recent painting acquisition Red Man Watching White Man Trying to Fix Hole in the Sky (1990), the artist’s early reflection on global warming. Taken as a whole, the ensemble offers a kind of capsule retrospective. And a painting fresh from the studio of 86-year-old Abenaki Quebecoise artist Rita Letendre, titled Cosmic Storm, throws the show’s opening punch, a fiery fury of strokes edging a black void. The most heartening thing about this show, though, is the strength of some of the fresh voices the curators have brought to the national stage. These are a few of the standouts. 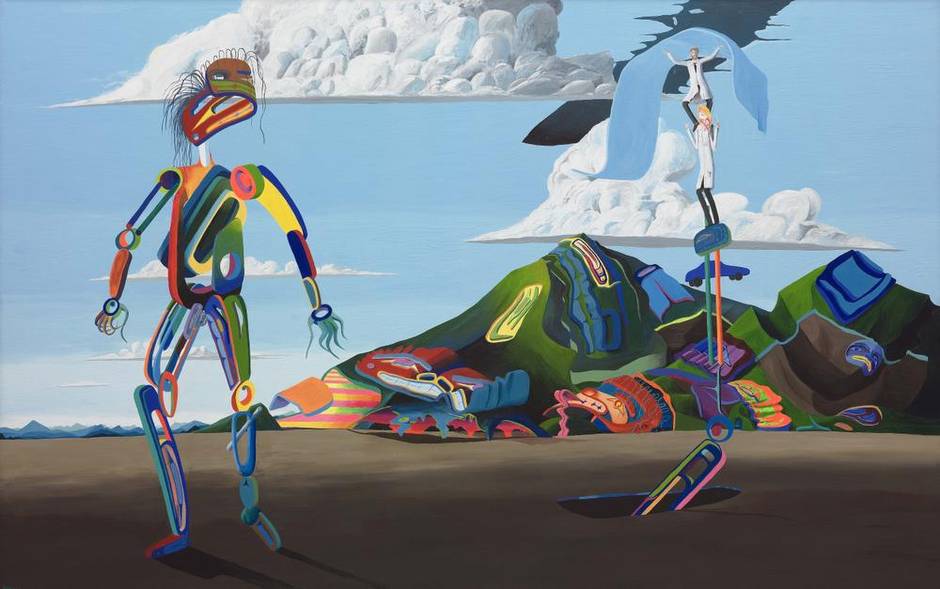 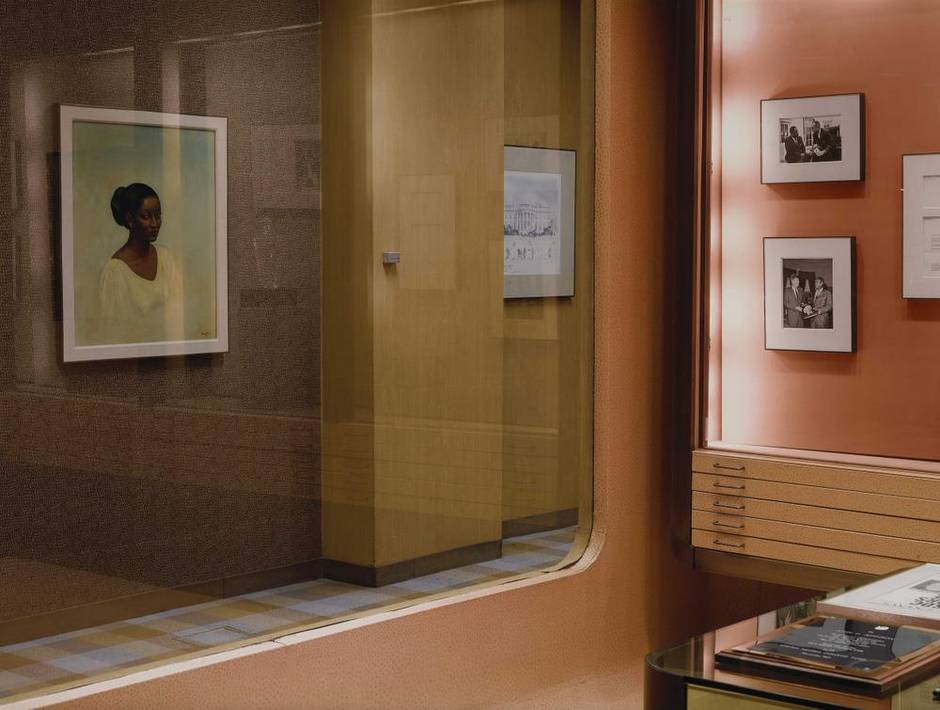 This Afro-Canadian artist is based in Chicago, and the suite of works presented in Shine a Light draws our attention to the editorial offices of Johnson Publishing Co. headquarters in that city, a building designed in 1971 by Afro-American architect John Moutoussamy, and the home of Ebony and Jet magazines. The company moved out in 2011, but Hartt got in just in the nick, creating an incisive portrait of an aspirational moment in time. One photograph shows a test kitchen with orange “Afrofunk” wallpaper. Another shows a lobby overseen by a hand-hewn wooden African sculpture of a standing figure, sharing space with some filing cabinets and a modernist clock. Tawny tones of umber, peach and orange prevail, with animal skin wall coverings and peacock wallpaper married to modern, minimalist design. The work speaks of a charged moment in American history that is oddly frozen in time (we see Jack Kennedy and Martin Luther King communing in one picture on an office wall), with vibes both primeval and futuristic. 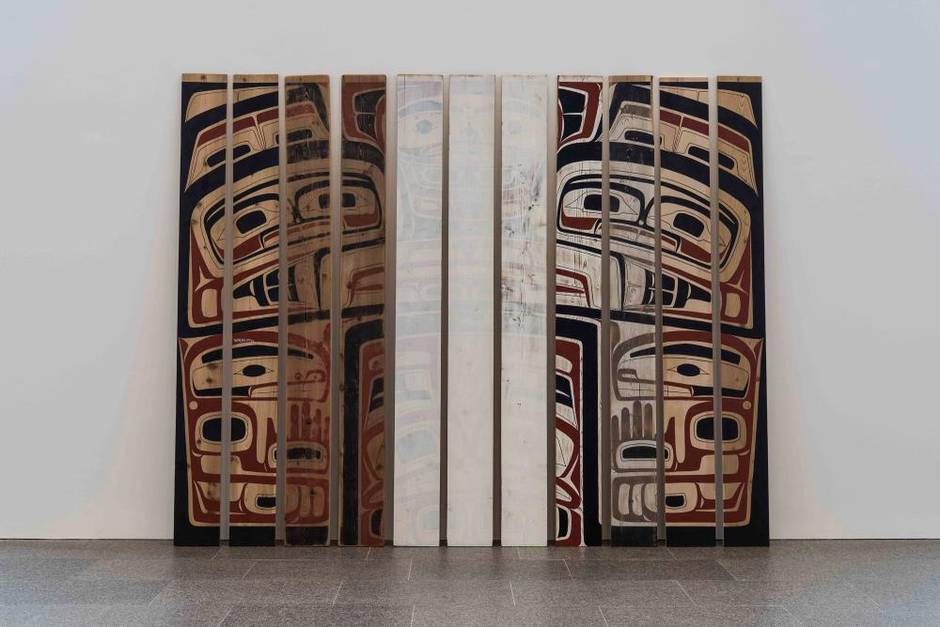 Luke Parnell, A Brief History of Northwest Coast Design, 2007, is featured in the National Gallery of Canada's Shine a Light exhibition. (© NGC)

The work of Vancouver artist Luke Parnell will be a striking discovery for many, in particular his A Brief History of Northwest Coast Design. It’s a suite of vertical painted wooden planks bearing the rust-and-black form-line designs of traditional Northwest coast art, set leaning against a wall. (The effect is as if one large panel had been cut into segments.) Concisely, the series suggests the developmental story of aboriginal culture in B.C. as it moves into and then out of the colonial crisis. Weather-beaten, distressed planks give way to a central trio of boards subjected to whitewashing, before the sequence concludes with the final three, which shift back, once again, to the original rich colours and textures. This sculpture (or is it a painting?) tells a tale of resurgence, and dawning optimism. 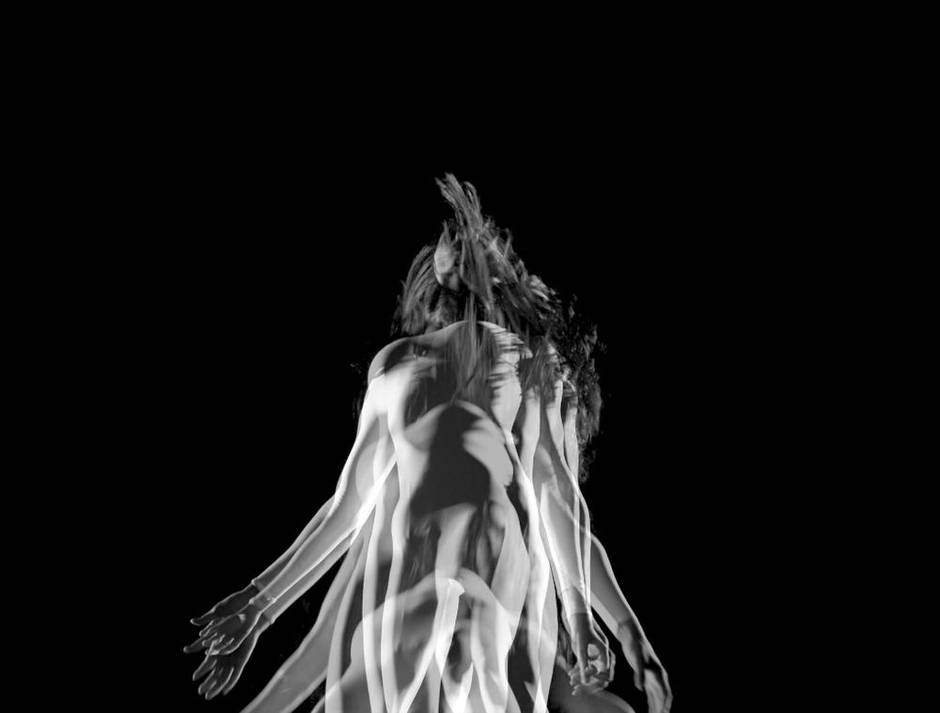 A still-frame image from Jeremy Shaw's Variation FQ, which is featured in the National Gallery of Canada's Shine a Light exhibition. (© Jeremy Shaw)

In 1968, Canadian filmmaker Norman McLaren made the classic experimental work Pas de Deux, in which stop motion effects a la Muybridge transformed a couple’s dance into a feathery flight. Shaw, a Vancouver-born artist who now lives in Berlin, has revisited this classic in his new 16-mm film Variation FQ, featuring a solo performance by voguing artist Leiomy Maldonado. Captured in this work at the conclusion of her transformation from man to woman, she prances, wheels and swivels in her high heels, her movements suggesting a fearless bid for freedom punctuated by heavy falls and dives. Shaw takes the image of Maldonado, and puts it through his own McLaren-like paces, transforming her by turns into a leaping flame, a fountain, an inferno of procreative energy. There’s a recklessness to Maldonado’s performance that is mesmerizing, and an astonishing physical vitality, as both performer and filmmaker stretch to describe a new kind of gender space. 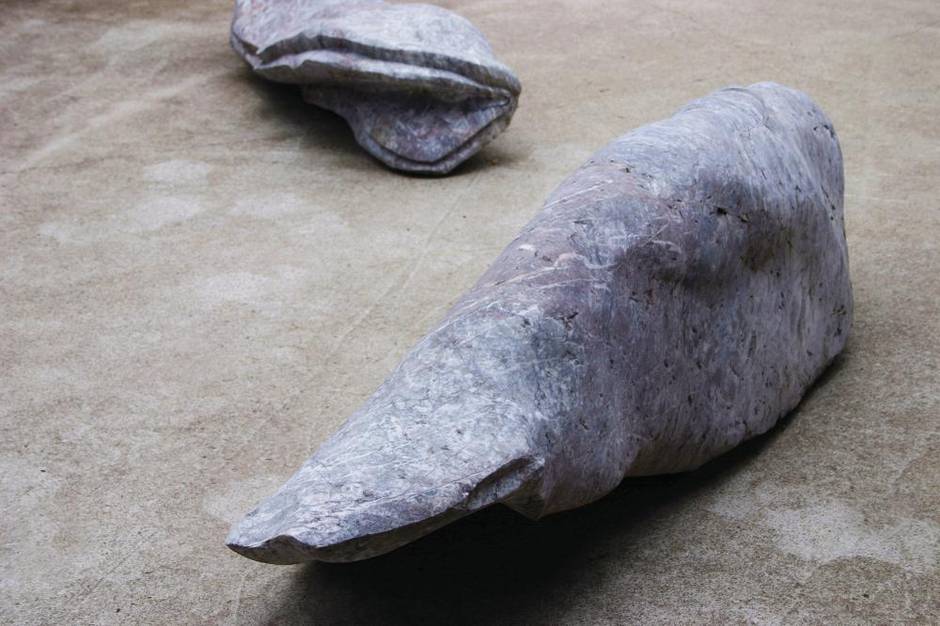 When I first saw these Shadows for Humans, I thought they were made of felted wool – so much did they seem like soft, compressed fibre, evoking the distillation of experience. (Liz Magor’s 1979 work Four Boys and a Girl came to mind.) It turns out that, rather than being soft, they are extraordinarily hard, being carved out of Cape Breton marble – another material made from compression, but of a more durable sort, and over millennia. Several things came to mind: the hummock of a body wrapped in carpet, oddly menacing; the shape of a seal on a rock; the female body, abstracted in all these folds and mounds. Who can say what we are looking at here? That imprecision is the wonderful thing about them.