It had all the makings of an epic disaster film. Less than 10 days from the annual Toronto International Film Festival, a Twitter tweet claimed a moviegoer had been bitten by bedbugs at one of the main festival venues, Scotiabank Theatre. Within hours, the scare story zapped through cyberspace, capturing unflattering headlines on such tabloid websites as Hollywood Reporter and Perez Hilton.

The consequences were potentially frightening: A-list stars, producers, directors, buyers, sellers and the world's media reconsidering their attendance. Despite the fact that Perez Hilton was still carrying the story at 6 p.m. Tuesday, however, that catastrophe scenario seems to have been averted.

How it started Los Angeles movie critic James Rocchi tweets an allegation that a friend of his had suffered bites to "back, bottom, and thighs" during a screening last week. He has 2,500 Twitter followers, who themselves have countless more. Quick on his BlackBerry draw, TIFF co-director Cameron Bailey issued a prompt, nip-it-in-the-bedbug-bud counter-tweet: "Before bedbugs becomes today's meme: we're on it, we're talking to Cineplex & are planning for an itch-free film festival." Mr. Rocchi is delighted. He issues Twitter updates, praises TIFF, "for whom he has the utmost respect," but the damage is done.

PR crisis management Cineplex Entertainment conducts what it later calls "a thorough investigation overnight," involving a specially trained sniffing dog and a secondary visual inspection, and confirms "that there were no bedbugs located within the Scotiabank theatre." Toronto Public Health follows with its own release, saying it had "not received any calls or complaints from the public about potential bedbugs at Cineplex, nor any other movie theatre in Toronto." You could almost hear the collective sigh of relief roll across the city. However, after the initial statement, TIFF officials remained silent. Not smart, says Mat Wilcox, a Vancouver-based PR expert in crisis management. If she were advising TIFF organizers or cinema executives, she'd counsel them to solicit third-party reports on public safety from reputable specialists, make a "best-in-class commitment to eradication," and have the CEO issue a statement putting "all resources available behind it."

Possible impact Never mind bug bites, and the possibility of heavyweight no-shows. A 2008-09 study of TIFF's economic value to Toronto put the number in excess of $162-million.

Hold the hosannas Although not in that particular theatre, pest control experts say Toronto is facing a soaring bedbug problem. The bugs recently been reported in hospitals, libraries, stores, apartment buildings, old-age homes, taxicabs and even police cruisers. "It's going to get much worse," says Michael Goldman, whose Toronto-based company, Purity Pest Control, trains the dogs that conduct searches for bedbugs and other pests. "The city is still in its infancy in that respect."

Who let the dogs in Mr. Goldman, among a handful of pest control agents using dogs to sniff for the presence of bedbugs, deploys three canines in his work: Kody (a German shepherd/collie mix); Alexa (a golden retriever); and Radar (an Australian shepherd). Training them is labour and time intensive, he concedes, but for large venues like theatres and hospitals, an ideal way to identify infestations. It takes about 15 minutes to check a standard theatre auditorium. "We're not sure which one or combination of organic compounds the dogs respond to," Mr. Goldman explains. "But when they find it they will sit and then either point with their paw or nose or physically go to the source of the infestation." Would he trust Cineplex's declaration that its theatre is pest-free? "I'd go to a movie there tonight."

We are not alone The Toronto situation, of course, is not unique. Virtually every major city on the North American continent is currently feeling the effects of the bedbug resurgence. Tuesday night NBC was calling it a "national crisis." Earlier this month, pests invaded a popular movie theatre in New York's Times Square, prompting investigations of all AMC theatres in Manhattan.

The political dimension Toronto MPP Mike Colle has issued invitations to what he's calling a "Bed Bug Summit" at Queen's Park on Sept. 29, designed to raise awareness of the emerging epidemic and recommend strategies for detection, prevention and eradication. Earlier this year, Mr. Colle tabled legislation that would have addressed bedbug issues in landlord-tenant relations. "But the more I learned," he said in an interview, "the clearer it became that this is a much bigger problem. There are social, economic, mental health dimensions to this." Mr. Colle says he hopes the testimony gathered at his summit will convince provincial and federal public health officials that the problem is urgent. "We need more research, a thorough examination of what works and what doesn't and we have to raise public awareness."

Bedbugs run amok Experts say the surge in infestations of Cimex lectularius, the Latin term for the common bedbug, is the result of several causes. One is the increase in global travel. Another is legislative changes in Canada and the United States that have banned once-effective pesticides, now deemed carcinogenic. A third is the development of species-specific toxins for roaches, ants and other pests. In the past, says Dan McCabe, vice-president of Toronto's Magical Pest Control, "more general chemical sprays often killed secondary infestations like bedbugs." Now, says Mr. McCabe, his firm is fielding 60-80 bedbug calls a day. And, as Toronto exterminator Avery Hunsberger notes, about one-third of all people bitten by bedbugs don't react to the bites, so the infestation spreads.

With a report from Matt Frehner 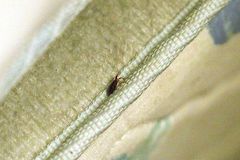