It's a fall afternoon and I'm sitting in the front row of a performance of Black and Tan , choreographed by the legendary 84-year-old Québécoise multimedia artist Françoise Sullivan. The dancer, Ginette Boutin, is performing a work that seems to release all the savagery of the north wind, due any day. Dancing in her bare feet in front of canvases of Jean-Paul Riopelle, Paul-Émile Borduas and their confreres (and consoeurs ), Boutin wears a costume duplicating the one originally designed for Sullivan by artist Jean-Paul Mousseau in 1948 - a combination of burlap, rope, string and swaths of paint laid on in bold, vigorous strokes. Sullivan sits watching, a few seats away from me, her face a study in satisfaction. Her dance is about seduction, survival, tenacity and joy. This is the spirit of Quebec automatism brought to life. It's a very Canadian moment. Watching it, I feel a kind of pride and wonder.

Then I remember where I am: the Varley Art Gallery in Markham, Ont., a small, semi-rural bedroom community of Toronto that sits about as far from the pretensions of trendy Queen Street, VIP art galas and "contemporary cultural discourse" as it is possible to be. How is it that I am having my most important Canadian art experience of 2009 here?

As it turns out, most of my big experiences of this year were like this. With the major museums gasping for cash like whales beached on a dropping economic tide, and the federal government tightening the reins on culture spending, it was the little fish that were still swishing their tails and swimming free.

Sure, the big museums had their moments. At the Montreal Museum of Fine Arts, the exhibition Expanding Horizons: Painting and Photography of American and Canadian Landscape, 1860 to 1918 was a solid undertaking; and the superb summer show honouring the memory of Betty Goodwin at the Musée d'art contemporain de Montréal was delicately installed and deeply moving.

I enjoyed the eccentricity of our 2009 pre-Raphaelite moment, with British painters J.W. Waterhouse at the MMFA and Holman Hunt at the Art Gallery of Ontario (the site, as well, of a marvellous small show of hallucinatory sculptures and photo works by Winnipegger Sarah Ann Johnson). Photo artist Scott McFarland at the National Gallery of Canada was snazzy and timely. (The Berninis weren't bad either.) And the Vancouver Art Gallery kept things current and surprising with an Andreas Gursky mega-show, and solo exhibitions by B.C. up-and-comers Reece Terris (who choked the central staircase of the museum with a faux apartment block) and DVD light-box artist Owen Kydd.

But the real energy in the Canadian scene largely shifted this year. Many of the country's liveliest curator/directors have what some people may consider CVs in reverse thrust: They've opted for the freedom of the smaller venues over the cumbersome bureaucracy of the larger institutions they left behind. There's Barbara Fischer, formerly of the Power Plant and the Art Gallery of Ontario, who has briskly remade the Justina M. Barnicke Gallery at the University of Toronto's Hart House into an essential part of the Toronto art ecology. Its show Noise Ghost: Shuvinai Ashoona and Shary Boyle shook things up, presenting the art of Cape Dorset alongside that of Toronto, revealing kindred imaginative cosmologies. This is Canadian content pitched with real sophistication.

There's Christina Ritchie at the Contemporary Art Gallery in Vancouver, balancing the best from Canada with the odd well-chosen foreign visitor in a savvy mix. I caught its summer show of watercolours by Tim Gardner (depicting the artist and his tree-hugger friends palling around in nature) and ironic sculptures on woodland themes by Quebec City collective BGL. (I particularly enjoyed the pink plastic bonfire in their ersatz wilderness.) And out at the Morris and Helen Belkin Art Gallery at the University of British Columbia, director Scott Watson made the most important contribution to the province's art history this year with a comprehensive exhibition of Jack Shadbolt's varied and impressive works on paper.

There's the oracular Philip Monk, reigning from his remote perch at the Art Gallery of York University (also an alumnus of both the Power Plant and the AGO), apparently as happy as a clam in the modernist gulag, so long as he can have the freedom to pursue what interests him. This year's General Idea show (a painstaking reconstitution of two landmark GI shows from the seventies) was a strategic, high-impact reincarnation of recent Canadian art history, while Monk's exhibition of new work by Jennifer Marman and Daniel Borins, earlier in the season, marked the emerging Toronto couple's best work to date.

In Montreal, the little Galerie de l'UQAM hit new high notes under the continuing direction of Louise Déry, one of Canada's most insightful curator/directors. This year, she presented a marvellous boutique exhibition of acclaimed Austrian artist Erwin Wurm and a show featuring the New York-based feminist collective Guerrilla Girls. The space has become required viewing.

These people are settling happily in the smaller venues because the big museums are tending increasingly to stick to safe, shallow ground. But their safe, shallow shows are also expensive to mount and market, and big audiences are a must. It makes for a diabolical game of chicken and egg (which came first, the deficit or the inflated marketing budget?), with programming losing bravura, depth and meaning along the way. Instead of curatorial staff pioneering inquiry and experimentation, curatorial administrivia takes hold.

Things have been trending this way in Canada for years, but in 2009 - with the economic downturn and the constraints that came with it - it suddenly seems written all over the walls. Our bigger institutions in Canada by and large no longer reflect the intelligence, ambition and insight of our country's best art professionals. How might those museums, once more, become hospitable to curators of talent, imagination and drive? That's something to think about for 2010.

Other notable works of 2009

An interior view of the hideaway homestead of seminal artist and poet Al Neil, the photograph conjures a sacred spot in the cultural landscape of British Columbia.

This pair of projections, shown at the Venice Biennale in June, were a testament to the bitter have and have-not extremes played out in Toronto's urban core, capturing by turns the reality of homelessness and the lofty detachment of corporate privilege.

A consummate expression of Vancouver's ever-stronger tradition of hobo bricolage, this installation at Catriona Jeffries Gallery included seeds gathered on Donald Judd's Marfa art compound in the Texas desert, and a walking cane retrofitted as a cigarette case.

Pascal Grandmaison, Untitled from the series The Inverted Ghost

Modulating from his customary Apollonian restraint to a new tone of queasy horror, this new image of eyeballs embedded in a sea of blue-tinged ooze signals an abrupt and intriguing change for one of Canada's foremost emerging artists. 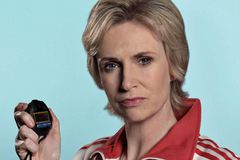 The year in theatre: first and showdowns
December 24, 2009 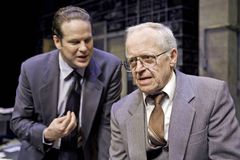 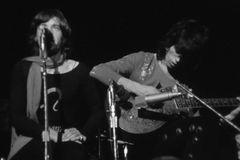 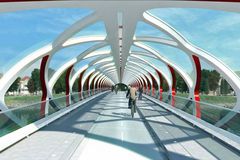 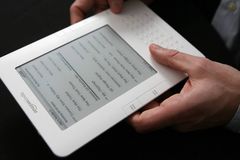