In English, we have some good idioms that connect our hands to our memories. When we know something intimately and unthinkingly, we compare it to the back of our hands. When we think about what matters to us – the stuff essential to happiness, the triumphs that make a life – we like equating value with scarcity; we count them on one hand.

Then hands can seem both anonymous and disarmingly identifying. Michel de Montaigne thought they could be more expressive and revealing than the sound of a human voice.

Belgian dancer/choreographer Michèle Anne De Mey and filmmaker Jaco Van Dormael, her husband, have developed a technique that uses hands as synecdoche for the whole human experience. Last year, they toured their genre-melding Kiss and Cry across 30-odd countries, performing it in eight languages. The work blends film and theatre to create "nano-dance," a choreography of the hands, which is captured live onstage via a Steadicam, then projected onto a huge screen. Kiss and Cry was presented at Canadian Stage in 2014 to critical acclaim; this year, the Toronto theatre will be the first theatre to show the work back-to-back with its second instalment, Cold Blood – which received its world premiere in December of 2015 in Mons, Belgium, as part of the European Capital of Culture festival.

De Mey is well known as a dancer and choreographer in Europe. Throughout the eighties, she performed with famed Belgian choreographer Anne Teresa de Keersmaeker, before founding an independent company and building a large repertoire of her own. Van Dormael has established a reputation in European film for his surreal reflections on death and his sensitive depictions of mental disability. The day before Kiss and Cry's opening night in Toronto, I sat down with De Mey and ensemble-member/associate choreographer Grégory Grosjean in the green room of the Bluma Appel Theatre. Van Dormael hadn't yet landed in Toronto – he was promoting his latest film, The Brand New Testament, which stars Catherine Deneuve, in Belgium.

De Mey, dressed all in black, has the long limbs of a dancer and a penetrating stare. She told me that the idea for nano-choreography came out of a desire for a thoroughgoing collaboration with her husband, but a reluctance to work within the usual dance-film conventions. They started with a workshop (a chantier) that could question and reflect on the differences and similarities between their forms.

"Jaco said that the difficulty he has with filming dance is trying to decide between a close-up shot and capturing the whole body. So, to be funny, we decided to solve the problem by filming a dance of the fingers – where close-up and general become the same shot."

But the joke had more life than they'd imagined; the informal audience who watched the fruits of the chantier found the hand choreography unusual and moving. So the couple kept developing the technique at their kitchen table, taking their children's outgrown toys – Playmobil, electric trains, doll-house furniture – and seeing how the movement of their hands in and around these objects could begin to suggest narrative and character. With a male and female hand at play, the theme of love emerged naturally. They developed a story of an old woman looking back on the great loves of her life – which, of course, she could count on one hand. The most perfect of these loves was the first one, from her youth, which started on a train when she grazed the hand of a stranger.

"Dance works with a lot abstraction," Grosjean says. He's been collaborating with De Mey as a dancer and co-creator for 15 years and plays each of the five male lovers in Kiss and Cry. "So it was really nice to play between representing the character and then letting that evolve into abstract dance, pure expression. What's fantastic about filming hands is that there's no head. So everyone projects themselves onto the character."

De Mey starts walking two of her long, elegant fingers upside-down on the coffee table between us. "You go like this, and you see a woman. Now you have an animal." She lowers her hand and makes four fingers scurry in the other direction. Then she undulates from her wrist, her hand swerving toward me in one piece. "Now a snake. You see, the code for storytelling is quite simple, you can jump and go really, really quickly and the audience is never lost. Everyone knows it's just hands – there's no trick!"

"It's a poetic of the fake," Grosjean adds. "Everyone knows this isn't reality, that it depends on the power of imagination."

Baring the device of creation is a crucial part of the show. All the mechanisms of filmmaking are on display; the narrative of making theatre unfolds alongside the narrative of the play itself. De Mey calls this "the revelation of the two eyes": the eyes of the audience and the eye of the camera.

When I caught Kiss and Cry on opening night in Toronto, it was moments of this dynamic simultaneity between process and effect that I found most compelling. What the collective is able to do from a technical perspective is impressive, conjuring beautifully contained micro-worlds through the use of mirrors, lights and diorama-like sets. In one scene, dry ice is made in a disco club by having a member of the collective exhale cigarette smoke onto the tiny dance floor. These worlds are then captured at shifting and surprising camera angles, producing atmospheric images of snow, skating rinks, burning houses and bathrooms submerged in water.

But I found the production marred by mawkish, sentimental writing and a focus on love that, without background or development, felt just about as unearned as heaps of gratuitous sex. All text is relayed by a male voiceover that oscillates between painfully twee aphorisms ("love affairs are like an onion; they start dry, then make you cry") and thin, repetitive tropes about people who disappear from our lives and people we never forget. There's swelling opera-singing one moment, then Amélie-esque accordion-playing the next. Not a moment goes by where you don't know exactly what emotion is being wheedled out of you.

I wonder if some people find this affective telegraphing helpful – something like the emotional equivalent of a laugh track. Judging by the roaring standing ovation, I would say yes. But my feelings tend to rebel when they know what's expected of them.

Near the end of Kiss and Cry, De Mey and Grosjean make their full bodies more involved in the primary narrative. The voiceover becomes less intrusive and, in flashes of stillness and uncertainty, I was able to breathe a little and enjoy refreshing subtlety. De Mey told me that Cold Blood goes further than Kiss and Cry in terms of theme and physicality. I hope this allows for more nuance, less control, so that the stylistic merits of nano-dance aren't overwhelmed by a heavy-handed story.

Kiss and Cry continues until Feb. 7; Cold Blood runs Feb. 10-14. Both are presented by Canadian Stage at the Bluma Appel Theatre in Toronto (canadianstage.com). 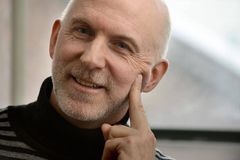 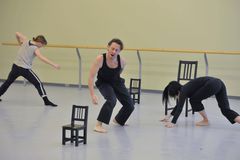 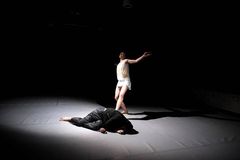