When we last saw the Canadian actress Meg Tilly she was a busy Hollywood ingénue and surprisingly young mother. She was nominated for an Oscar in 1986 for playing the title role in Norman Jewison's Agnes of God; in her early 20s, she married Tim Zinnemann, a director and producer 20 years her senior, and had two kids. She starred in The Big Chill and the 1989 Dangerous Liaisons adaptation Valmont, where she met the British actor Colin Firth, father of her third child.

Today, the 52-year-old lives in Victoria with her husband, writer Don Calame, and is appearing at Toronto's Tarragon Theatre in The Real World?, a play by Michel Tremblay.

I really only have one question: How did you get here?

I had stopped acting for many years.…

Why did you do that?

My daughter was in Grade 3. I had always taken my children out of school to go on movies. When we came back from doing Leaving Normal [in 1992] her best friend had become best friends with someone else and she had no one to eat lunch with. I had this flash-forward thing, seeing things spin out to the worst possible scenario. For the last year I worked at whatever would pay me the most for the least time away from my children, and then I stopped.

It was hard at the beginning. It was like I had a contagious disease that friends thought they would catch. You don't stop acting when you are in your early 30s.

I threw everything into home life, and I wrote [novels and books for young adults]to keep my creative side up. And then my children grew up and left home. Everyone said, "Now you can do what you want," and I did not know what that was. Did I take up knitting. Did I do more volunteer work?

My sister [actor Jennifer Tilly]gave me a bracelet that said, "It is never too late to be what you might have been." I had never even thought about going back to acting. Then this voice dropped in and said, you have always wanted to do theatre.

So you came back as Martha in Who's Afraid of Virginia Woolf? at the Blue Ridge Repertory Theatre in Victoria last year. What a place to start, all those recriminations and screaming.…

She's my favourite character I have ever played, but she was scary. When you finish every night you feel light, almost giddy. Then at 2 o'clock in the afternoon you start to get this feeling in the pit of the stomach.

The Real World? is not one of Tremblay's better known plays. What's it about?

It's about authorship, who has a right to say what. You have him in his world with his mom, dad and sisters but then – you know how you are writing in your head – so he is doing that too. His mom says, "Your version is the one that will survive because it is written on paper."

I am the [fictional]mom who says what he wants her to say; I am the mom who takes the dirty laundry and spreads it all over living room and then you have Jane [Spidell]who is the real mom, who says, "This my life; I would never say that."

You also did some Canadian TV recently, the miniseries Bomb Girls. Does working in Toronto take you away from your home and husband?

We are going to move here. The nice thing about Toronto is you don't have to have plans, you can just walk in somewhere. "There's a concert, let's get a ticket." We are loving it, but talk to me in the dead of winter.

It is notoriously hard for an actress to get parts after 40. Is this an awkward age?

I find it off-putting when I see an actor in his 60s with the romantic interest in her 30s but you have a lot of older men running the studios, the directors, they fancy themselves. I think women of all ages are interesting. In England you see it: Look at Judi Dench, someone like that. I love seeing all the layers and textures of women as they age. I love aging myself. There are challenges, there are sorrows, but they roll over you in a different way.

People might say it was impossible to do what I did but I have had real luck – twice.

The Real World? runs at the Tarragon Theatre in Toronto from May 2 to June 3 (it is now in previews). 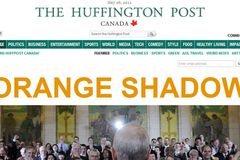 Now you can read her like a book
October 9, 2006
Follow Kate Taylor on Twitter @thatkatetaylor
Report an error Editorial code of conduct
Due to technical reasons, we have temporarily removed commenting from our articles. We hope to have this fixed soon. Thank you for your patience. If you are looking to give feedback on our new site, please send it along to feedback@globeandmail.com. If you want to write a letter to the editor, please forward to letters@globeandmail.com.
Comments