Against the Grain is one of Toronto's – if not the country's – most innovative opera/theatre companies, producing on a shoestring exciting evenings of musical theatre. They're known for their reworking of Mozart operas to fit contemporary settings, but they've also experimented with many other ideas, both here and at their annual residency at the Banff Centre.

For their next production, the focus is on a founding member of the company: the new show belongs to soprano Miriam Khalil.

Khalil is a highly accomplished opera singer, having performed with traditional companies across North America to great success. Her Donna Elvira in AtG's #Uncle John, their adaptation of Don Giovanni a couple of seasons ago, was stunning. But Khalil is not your standard performer of the great roles of Western music. She's a Lebanese Christian who was born in Damascus, Syria, and moved to Ottawa when she was 7. Her musical soul strums and resonates with Arabic church music, Middle Eastern folk song, as well as Schubert, Mozart, Handel.

Generally, and sadly, most of the time, that musical breadth just causes headaches and a form of cultural schizophrenia in a pigeonholed world in which neatness of categorization is all. But this week, Khalil is singing a work that might have been written for her, about her, destined for her. It is Ayre, from 2004, by Osvaldo Golijov, an extraordinary contemporary composer with a similar and similarly cosmopolitan cultural identity – a Romanian Jew, born in Argentina, now living in Boston, equally conversant with tango and klezmer and the classical canon, seized with the connectivity of all culture through music. Ayre is a collection of 11 pieces of music with roots in Spanish Andalusia – Byzantine chant, Sephardic lullabies, Arab, Hebrew and Christian texts – an ecstatic demonstration of the power of music to express the human condition. It may be one of the defining works of the new century.

Khalil remembers exactly where she was when she first heard Ayre. She was working with James Somerville, the Canadian French horn player who was on the original recording of Ayre with soprano Dawn Upshaw, released in 2005. "He sent me a copy," she remembers, "and my mind was completely blown by what I was hearing. I didn't know how or when, but it went immediately on my bucket list of things I knew I wanted to do."

That was more than a decade ago. Then, this summer, Barry Shiffman, at the Banff Centre, who had earlier presented some Arabic folk songs with Khalil to welcome Syrian refugees to Toronto, suggested she sing some Arabic songs in Banff. "We were going through material, and he said, 'Actually, I don't know if you've ever heard of this piece called Ayre by Osvaldo Golijov,' and I was, 'What? That would literally be a dream come true.' I was so excited." Extra added bonus. Golijov was in Banff for a residency this summer. He coached her through her performance. And he'll be here for the Toronto performances well.

Enter Joel Ivany, Against the Grain's artistic director (and incidentally, Khalil's husband). First, Ivany, as he has done before, added some theatrical touches to allow the drama of Ayre to be more fully absorbed by its audiences. As well, he and Khalil went looking for a performing space for the work. Against the Grain is famous for presenting their shows in surroundings that match the spirit and content of their productions. So, Ayre, along with three other works by Golijov as sort of a first act to Ayre, will be presented in the Toronto's astonishing Ismaili Cultural Centre, the building and religious space adjoining the Aga Khan Museum.

If, like me, you have only driven by this complex as you speed up or down the Don Valley Parkway and have never stepped inside, be prepared for a complete and utter surprise, a space of immaculate marbled peace, so beautifully proportioned and constructed, a testament to the cultural values and architectural beauty of other worlds. And be prepared as well for an evening of cultural mash-ups and abutments, presented by Against the Grain, as an Islamic Centre hosts a piece by an Argentinian Jew sung by a Lebanese Christian, celebrating a long-ago common archeology of cultures and faiths. Like so many other Against the Grain productions, it looks to be an evening of power and resonance, the kind of which deep memories are fashioned.

For Khalil, it will be more. "All my life, I've had different identities thrown at me. When I moved to Canada, I had no idea how to speak the language, and even though I was only 7, I felt I needed a new identity immediately. My parents wanted me to be in Arabic school but I said no, I don't want to go to Arabic school. I want to learn English.

"However, as I grew up I became very proud of being Lebanese, because that's who I am. Even when I started singing, maybe because of my Middle Eastern way of colouring things, people got confused – are you a mezzo or a soprano they would ask. So in everything there's always been questions of identity. But with this piece, I felt: I'm home. It all fits. Finally, I don't have to fight with myself. I can be everything I am in this work."

Ayre runs Nov. 10 to 12 at the Ismaili Centre in Toronto (againstthegraintheatre.com). 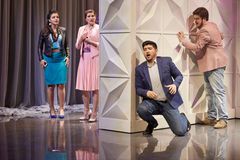 Crow’s Theatre lands permanent spot in Toronto’s Leslieville
November 1, 2016
Review
Wallis Giunta’s star shines brightly in Opera Atelier’s Dido and Aeneas
October 21, 2016
Follow us on Twitter @globeandmail Opens in a new window
Report an error Editorial code of conduct
Due to technical reasons, we have temporarily removed commenting from our articles. We hope to have this fixed soon. Thank you for your patience. If you are looking to give feedback on our new site, please send it along to feedback@globeandmail.com. If you want to write a letter to the editor, please forward to letters@globeandmail.com.
Comments